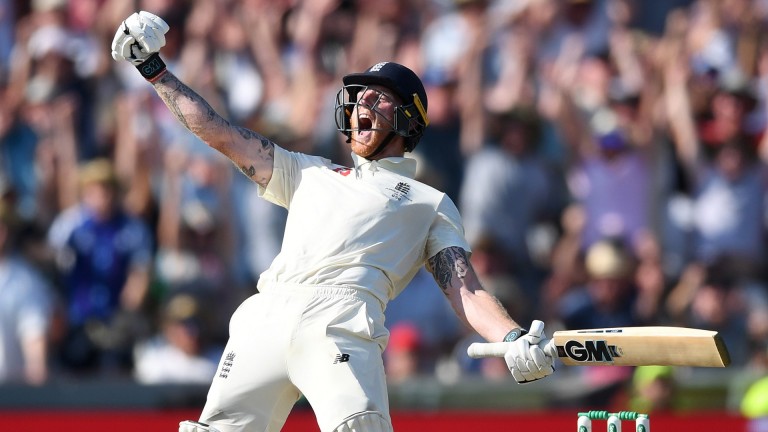 Champion jumps trainer Paul Nicholls was quick off the mark after England's unlikely victory in the third Ashes Test at Headingley on Sunday, securing the right to name a horse 'Onethreefivenotout' following the heroics of Ben Stokes.

England all-rounder Stokes was the hero at Headingley after an unbeaten knock of 135 helped England level the series with Australia, having looking dead and buried after the first innings and Nicholls was quick to seize the naming opportunity.

The trainer explained: "Iain Turner, who is [owner] Max McNeill's racing manager, tries to be a bit sharp [with his names] and after the world cup he got Champagne Superover, so I thought 'I'm going to get in here straight away'.

"It was an obvious name and it was 18 letters, which is the maximum characters you can have for a name and it just fit in perfectly."

#Ashes2019: @englandcricket are 11-8 to win back the #Ashes urn after Ben Stokes's Headingley heroics levelled the series at 1-1 with two Tests to play. @CricketAus are 2-1 to win the series and a drawn series is also 2-1. pic.twitter.com/jgE3viBUT4

He added: "I made sure to reserve it literally two seconds after the last ball. Cricket is an amazing sport and it was a great match. I haven't decided on the horse yet but I just thought it would make a great name. I was quick out of the blocks with it and I got lucky I reckon."

True to form, the McNeill family tweeted their wish to have a horse named in honour of Sunday's nail-biter, with Nicholls - in good humour - suggesting they could yet own Onethreefivenotout should they be willing to buy the horse in question when named.

The team at Carlisle racecourse were also quick out of the blocks, honouring local hero Stokes by offering free entry to Thursday's meeting for anyone with Ben or Stokes in their name.

FIRST PUBLISHED 7:17PM, AUG 25 2019
It was an obvious name and it was 18 letters, which is the maximum characters you can have for a name and it just fit in perfectly

No Irish Derby day return for bookmakers following dispute over pitch rules One trainer, one jockey, one horse and one race to watch on Saturday Heavy rain forces Cartmel to cancel for Friday but Sunday card not in doubt 2021 Irish Derby at the Curragh: the runners, the odds, the verdict Grade 1 winner Lalor leaves Kayley Woollacott to join champion Paul Nicholls 'We owe him absolutely everything' - Scottish National hero Ryalux dies aged 28