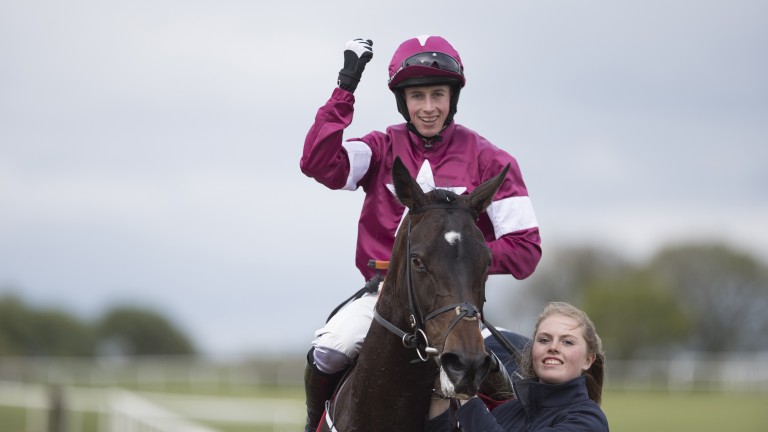 Bryan Cooper, seen here sporting the famous Gigginstown silks, will not be retained by the firm this season
Patrick McCann (racingpost.com/photos)
1 of 1
By Richard Forristal 8:34AM, JUL 29 2017

Bryan Cooper will not be riding as first jockey to Michael O'Leary's Gigginstown House Stud after the champion owners on Friday revealed the team will operate without a retained rider for the coming season.

However, no sooner was the surprise news revealed than Eddie O'Leary, who manages Gigginstown's day-to-day affairs, laid down the gauntlet by encouraging Cooper to emulate his predecessor Davy Russell's response to the same fate.

A statement announced that Gigginstown would now use the best available rider on a race-by-race basis, and that Cooper will still be part of team.

Speaking subsequently, Eddie O'Leary challenged Cooper to exhibit the same defiance as Russell did when he was sacked at the end of 2013.

Russell refused to speak out against his former employer's decision, and, after Cooper suffered a horrendous leg break on the second day of the 2014 Cheltenham Festival, seized an unexpected opportunity to ride two winners in the famous maroon and white silks on the final day of the week.

"Bryan hasn't been dropped in lieu of somebody else," O'Leary said. "There won't be somebody else. If it lights a fuse under Bryan like it did with Davy Russell, who started riding like God after it, all the better – Bryan will get buckets of rides.

"If it focuses him it could make a far better jockey out of him."

Cooper was appointed at the beginning of 2014 following Russell's shock sacking and since then has plundered a raft of big-race victories for Gigginstown, enjoying ultimate glory when steering the Gordon Elliott-trained Don Cossack to victory in the 2016 Cheltenham Gold Cup.

However, it wasn't all plain sailing. Inevitably, given the numbers at Gigginstown's disposal for big races, Cooper proved no less infallible than Russell had been when it came to choosing the right mount, with Rule The World's 2016 Grand National success among the high-profile winners the 24-year-old vacated the ride on.

Apart from that psychological torture, there was also a multitude of physical pain. Since his appointment his list of injuries has included a broken tibia and fibula in that aforementioned fall from Clarcam at Cheltenham in 2014.

Cooper missed the 2015 Galway festival with a dislocated thumb and suffered a collapsed lung and liver laceration there last year when dumped on a fence by Tiger Roll.

Before 2016 was over, he also broke his arm and his pelvis in separate incidents.

Although O'Leary stopped short of stating Cooper might not be riding with maximum confidence, his comments suggest fairly emphatically that Gigginstown are of the view he isn't riding as well as he can.

"We haven't lost faith in Bryan and he'll be riding for us in the Galway Plate on Wednesday," O'Leary added. "There's been no major falling out and, if this focuses him, we'll still be using him plenty.

"We're not retaining Bryan and he won't have first call, but he'll still be riding a lot for us. Between Davy Russell, Sean Flanagan and Jack Kennedy, when he's back, there are plenty of fellas riding very well and we'll be using the best available."

Cooper has ridden six winners from 84 mounts this season, although he has had a relatively lean spell of late, his last winner coming just over a month ago on Gigginstown's Cinema De Quartier at Kilbeggan.

The initial Gigginstown statement on Friday thanked "Bryan for his contribution to its success" and revealed he learned of the decision "at a meeting with Michael O’Leary this afternoon".

Cooper said in a statement on Friday evening: "I would like to sincerely thank Mr O'Leary and his team at Gigginstown House Stud for the wonderful opportunity of being their retained jockey since January 2014. Their support to me has been immeasurable.

"We have enjoyed great success and since taking the job I feel privileged and proud to have ridden 28 Grade 1 winners in the maroon and white silks. Most notably, the 2016 Cheltenham Gold Cup on Don Cossack, and other highlighted victories on horses such as Don Poli and Apple's Jade.

"There has been no parting company or falling out and it's business as usual. I look forward to continuing to be part of the Gigginstown House Stud team and utilising existing relationships with trainers as a freelance jockey.

"I have no specific targets other than to continue to be successful."

FIRST PUBLISHED 3:50PM, JUL 28 2017
We haven't lost faith in Bryan and he'll be riding for us in the Galway Plate on Wednesday