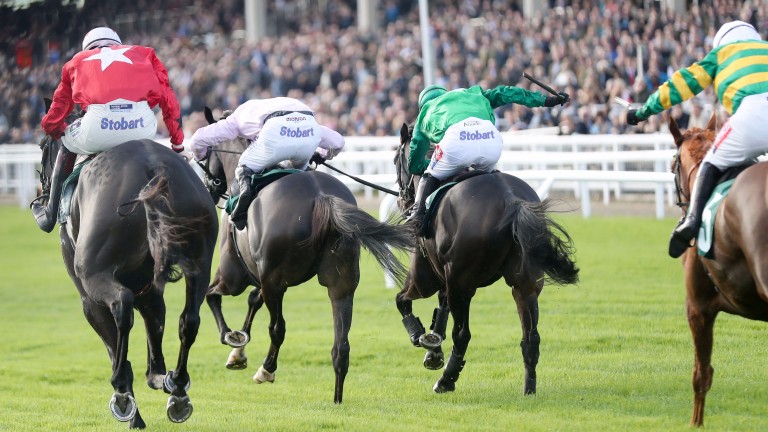 A slight rejig of the programme goes some way to explaining the number of runners at Cheltenham on Friday, which will be the lowest on the day for the last six years, track officials have suggested.

The seven-race card has attracted 67 declarations, which falls below the 88 who ran on the day in 2018, when the going – described as good for this week – was similar.

It was the same story 12 months ago when 71 horses took part, although the Friday card – screened in part on ITV4 – included a 13-runner 2m handicap chase and 17-runner 2m½f handicap hurdle, which have been switched to Saturday's bill and will form part of broadcaster's coverage.

Runners and riders for Cheltenham on Friday

In their absence, two novice hurdles, a novice chase and novice handicap chase – which have attracted just 23 runners between them – will kick off the first meeting of Cheltenham's core winter period.

"We have moved races around and it might look a slightly unbalanced programme on the Friday with the number of novice events, but we had some of the bigger handicaps on the Friday last year because we had two days of ITV coverage, whose coverage is better suited to those races," clerk of the course Simon Claisse said on Wednesday.

"You'd almost expect it [smaller fields], especially in the Class 2 and Class 3 novice races here and particularly in this transition period between the summer jumpers and the proper winter horses coming out. It's always a quieter spell and we've seen it elsewhere in jumping in the last couple of weeks."

Friday's card features five entries from the stable of top Irish trainer Gordon Elliott, while there will be no Covid-19 restrictions at the track for the first time since the 2020 festival. 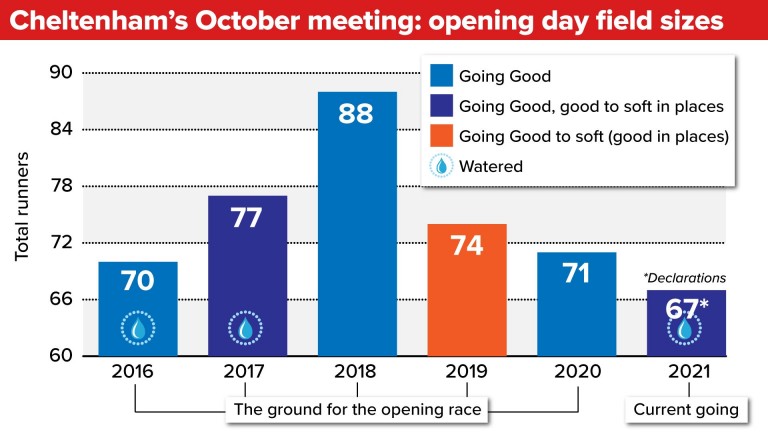 Turning his attention to conditions, Claisse went on: "We had quite a mixed summer, a dry spell though August, then a mixture of rainfall and dry weather through September and October, and some nice periods of rain in the last three weeks."

A total of 7mm of rain fell at the track on Wednesday evening, easing the ground to good, good to soft in places (from good).

This week's fixture will be the penultimate one overseen by Claisse, who will soon be replaced by Jon Pullin.

"I shall be working through until after the November meeting and the plan is for Jon to be in charge for the December meeting," he said.

"Of course I will miss it. I'll miss loads of it, but I'm in my 23rd year now and think it's time to step aside and it's the right time to look for other opportunities either in business or racing."

FIRST PUBLISHED 7:00PM, OCT 20 2021
It's always a quieter spell and we've seen it elsewhere jumping in the last couple of weeks

Are the opposition running scared of Bob Olinger? Four Turners talking points Will Gordon Elliott dominate again? Four National Hunt Chase takeaways Arkle, Brown Advisory and more: potential runners plus a 25-1 long-range shout It will be the roar of all roars - and now we have a Supreme worthy of it Meet the miracle workers with just four horses but eyes on the biggest prizes Champ given Cleeve Hurdle prep as Stayers' emerges as 'probable' festival target