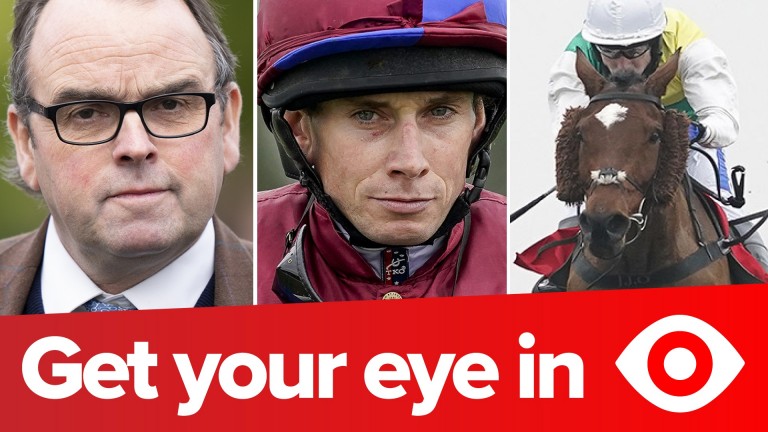 Following big-race success with Trueshan on British Champions Day last Saturday, Alan King takes the wraps off one of his jumping stars with Tritonic running in the Masterson Holdings Hurdle (2.55) at Cheltenham.

Tritonic was a main fancy for last season's Triumph Hurdle after an impressive success in the Adonis Hurdle, but he disappointed at Cheltenham and scoped badly afterwards.

The four-year-old has had two runs on the Flat since and will be bidding to bounce back over hurdles for King, who also sends out Inchicore in the Group 3 St Simon Stakes at Newbury (2.35).

The three-time champion jockey rode Saxon Warrior to win the Group 1 contest for Aidan O'Brien in 2017 and again teams up with the Ballydoyle trainer on ante-post favourite Luxembourg.

The famous green, yellow and white colours of Trevor Hemmings will be seen on the racecourse for the first time since the legendary owner's death at the age of 86 last week.

It seems wholly appropriate that Cloth Cap should be the first to carry those silks as he was sent off favourite for last season's Grand National, a race Hemmings won three times with Hedgehunter, Ballabriggs and Many Clouds.

Cloth Cap was pulled-up at Aintree in April but all roads lead back to the National with the first step coming in the 3m1f handicap chase at Cheltenham (2.20), while last season's Cheltenham Festival winner Vintage Clouds also carries the Hemmings silks at Kelso in the 3m2f handicap chase (3.19).

The last Group 1 of the British Flat season takes place at Doncaster with the Vertem Futurity Trophy Stakes (3.15) always a rich source of pointers towards next year's Classics.

The last four winners of a race formally known as the Racing Post Trophy – Saxon Warrior, Magna Grecia, Kameko and Mac Swiney – have gone on to Classic glory the following season.

Aidan O'Brien seeks a record-equalling tenth victory with the exciting Luxembourg, who took his unbeaten record to two when recording an easy win in the Beresford Stakes last time.

The short-priced favourite faces some classy opposition in Royal Patronage, who beat the exciting Coroebus in the Royal Lodge, and Bayside Boy, a course winner in the Champagne Stakes at the St Leger meeting.

2021 Vertem Futurity Trophy at Doncaster: the runners, the odds, the verdict

Doyle and Marquand set for second appearance in Hong Kong Jockeys' Challenge Alan King: 'I had to find something else - the Flat was a way of surviving' Edwardstone downs favourite Third Time Lucki to land first Grade 1 for Cannon Ryan Moore fends off suggestion of bias from Gibbons' counsel in High Court Edwardstone in fine form for Grade 1 Henry VIII challenge at Sandown 'Remastered's fall changed the race' - Leighton Aspell with his big-race verdict