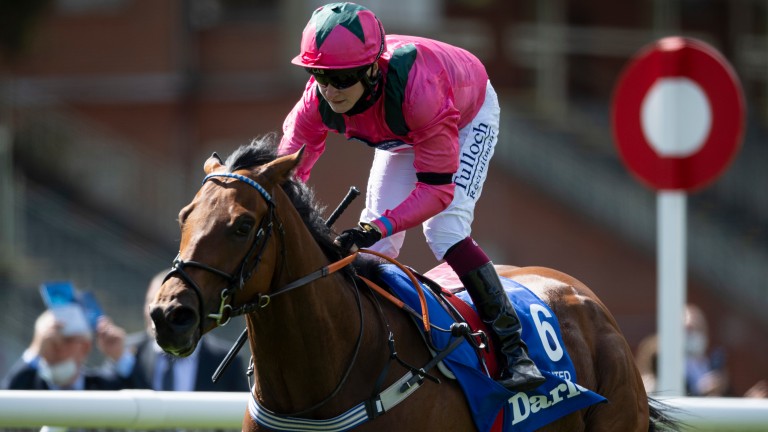 Roger Teal is confident his July Cup winner Oxted can make up for lost time and add a second Group 1 prize in next month's Qipco British Champions Sprint Stakes at Ascot.

The four-year-old missed his intended target at Haydock earlier this month with what Teal now believes was an allergic reaction.

The trainer said: "We don't know what it was exactly. He came out with lumps all over him, so he had a reaction to something. His bloods were okay but he was a bit off and we needed to give him a shot to get it to clear, so he wouldn't have been able to run anyway. It was a strange one.

"He seems fine now – he's over whatever it was – and he's back on track. We're hoping to go to Ascot for the Sprint on British Champions Day."

Dream Of Dreams landed the Sprint Cup in Oxted's absence and the Sir Michael Stoute-trained six-year-old now heads the ante-post market for the Ascot race on October 17, but Teal did not see anything that left him overly concerned.

"If Oxted had turned up at Haydock in his best shape I think we'd have been thereabouts. I don't think Dream Of Dreams would have had it all his own way," he said. "He's done it well and he stays seven [furlongs] but we've won over seven as well. He did the job well on the day but I think if we were in the race it'd have made his case a lot harder."

On their Ascot head-to-head, Teal added: "If the weather stays like it is I'd be very confident, but come mid-October it's likely to be wet. I've said all along he's bred to go on soft ground. He's had two lesser runs on soft ground but I think we maybe read too much into that – he was weak last year.

"He's a big, strong horse this year. Ideally you'd want some sort of good in the ground, but we go there open-minded."

FIRST PUBLISHED 1:00PM, SEP 16 2020
If Oxted had turned up at Haydock I think we'd have been thereabouts. I don't think Dream Of Dreams would have had it all his own way