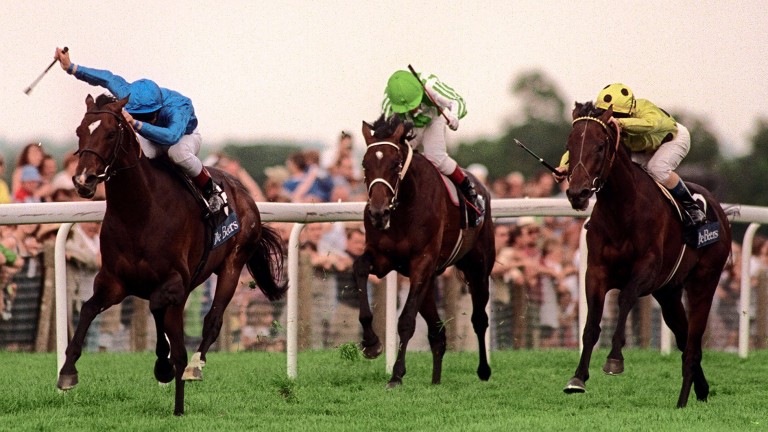 Following Enable's record breaking third win in the King George VI & Queen Elizabeth Qipco Stakes, we look back at the careers of the Dahlia and Swain, the two dual winners of the race that set the bar high for Enable to beat.

The first dual winner of the King George was one of France's all-time leading middle-distance performers, but she was also an animal who enjoyed most of her finest hours outside of France.

When coming to Ascot in 1973 she was on a roll, having just landed the Irish Oaks, but in a stellar field she seemed fairly priced at 10-1. Those odds were rubbished, the Maurice Zilber-trained raider demolishing the opposition in the hands of Bill Pyers for a six-length success.

Twelve months later she was back and once again brilliant, cruising to victory under Lester Piggott, who had to work only marginally harder than when aboard Nijinsky four years earlier.

In 1975, either side of her two wins in what is now the Juddmonte International, Dahlia finished third at Ascot to Grundy and Bustino in what became known as the race of the century.

Swain joined trainer Saeed bin Suroor for his five-year-old season in 1997 having already won a Coronation Cup and finished fourth in an Arc for Andre Fabre in France.

A surprise defeat on debut for his new yard in the Princess of Wales's Stakes at Newmarket's July meeting ensured he lined up a largely unconsidered 16-1 shot for one of the deepest King George fields in history.

Five-time Group 1 and Arc hero Helissio, three-time Group 1 winner Singspiel and Pilsudski – who at the time had amassed half of his six Group 1s – were expected to fight out the finish.

In what is remembered as one of the bravest performances on turf, Swain kicked for home early under John Reid and kept on doggedly to hold off Pilsudski by a length, with Helissio and Singspiel in third and fourth.

Defeated in his next five starts, Swain returned to Ascot the following year as an 11-2 chance partnered by Frankie Dettori and duly rolled back the years at the age of six.

Similar to 12 months previous, he was driven to lead inside the final two furlongs before fending off the persistent challenge of Derby winner High-Rise to complete back-to-back wins.

If you want to know more about the King George, read these:

One horse, one jockey, one race and one trainer to watch on Saturday

FIRST PUBLISHED 3:54PM, JUL 25 2020
Twelve months later she was back and once again brilliant, cruising to victory under Lester Piggott