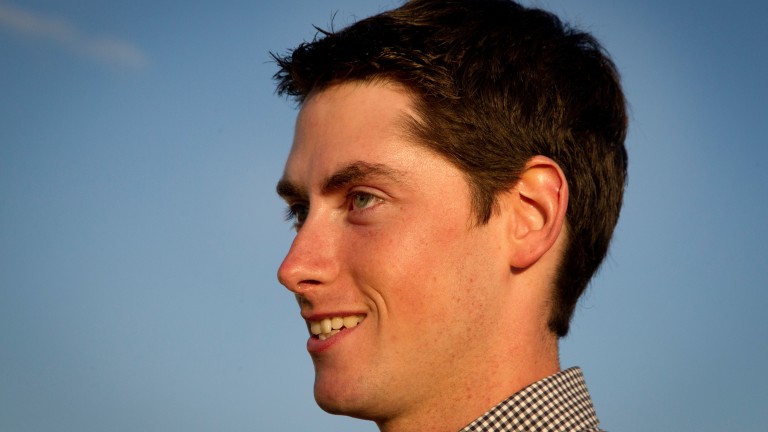 Emmet Mullins: is in the process of landing a major gamble at Tramore
Patrick McCann (racingpost.com/photos)
1 of 1
By Stuart Riley UPDATED 8:03PM, APR 16 2018

A sizeable blow on bookmakers is now a distinct possibility after Tornado Watch justified hefty support to land the first leg of a potentially stunning double on a wet Monday evening at Tramore.

Tornado Watch, trained and owned by Emmet Mullins, ran out a convincing winner of the 2m handicap hurdle under David Mullins with Paddy Power reporting doubles on the winner and stablemate Sunday At Augusta, who runs in the bumper later on the card, running up six-figure liabilities.

The son of Selkirk seized the lead on the second circuit and never looked in too much danger, running out a four-and-a-half-length scorer.

Tornado Watch, who Mullins owns as well as trains, was as big as 16-1 for the Becks Lager Handicap Hurdle this morning and returned a winner at 11-4, while the Stephen Murphy-owned Sunday At Augusta was as big as 50-1 for the Bulmers Cider (C & G) INH Flat Race (7.50).

Sunday At Augusta is now a general best-priced 3-1.

After Tornado Watch's win, Mullins said: “That was great. It took us a few runs to figure him out. We were disappointed with him at Naas the last day as we thought he’d go a bit better.

“It was only coming home and looking back at all of his form, every time he’s won, it was going right-handed.

“The two runs he had for us were both left-handed so I think that’s been something we thought might be something of an advantage so thankfully it worked out.”

Asked if he had got involved in the gamble, Mullins added: “Thank God he won.”

'It will take our pants down'

Paddy Power, who were by no means best-priced about either, have been stung on the 532-1 double with spokesman Paul Binfield reporting: "They've come for the double. We were 40-1 about Sunday In Augusta and he's now 15-8 [after the first winner].

"We've seen a few singles for Sunday At Augusta, but it's mainly the double and it will take our pants down. It's over six figures."

David Stevens, spokesman for Coral, felt the firm was not on the end of a potential widespread coup.

He said: “These are races that we would typically trade carefully when the market was first up, and while we laid a couple of bets on the double early doors, it was nothing of any great note, and clearly at the bigger prices available earlier, it only takes a small amount to build up liabilities.

“While there is always a snowball effect to these things, it doesn’t appear we’re on the end of a widespread coup, obviously if both legs win there’ll be some winning punters but nothing we can’t cope with.”

Mullins, who is part of the famous family dynasty headed by Ireland's champion trainer Willie, is in just his third season with a licence as a trainer and claimed to know nothing about the plunge.

Mullins has saddled 11 winners from 90 runners across Flat and jumps for €187,366 in prize-money since he began training in June 2015.

Paddy Power will certainly not be the only firm hit as both Mullins' horses were cut across the board.

Bookmakers hit for six by Charles Byrnes treble at Roscommon