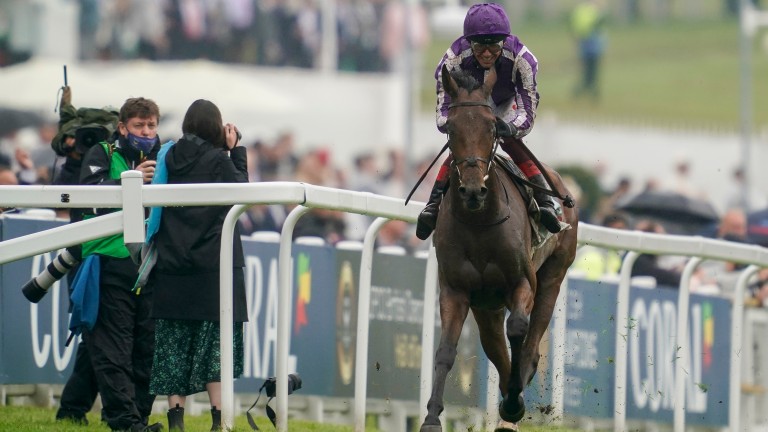 Snowfall's majestic Cazoo Oaks performance should have come as little surprise to pedigree enthusiasts, given that her flawless international breeding lent her a decent head start.

Had more of the late Deep Impact's progeny made their way from Japan, he might very well have managed a first Epsom Classic victory many years before his daughter achieved it by a record 16-length margin.

The undisputed champion of his homeland's racing and bloodstock industry won at trips up to two miles and has already sired a winner of the French Derby in Study Of Man and Oaks (Fancy Blue), but his offspring were in huge demand for the domestic market. Just last weekend he collected the Japanese Derby for a record seventh time.

Deep Impact was used by Coolmore and its close partners, such as Snowfall's breeders Roncon, Chelston and Wynatt, for a handful of elite broodmares and the cross with a Galileo mare has been notably successful - the same brand was behind the 2018 Guineas hero Saxon Warrior.

Now 20 years on from Galileo's Derby victory he has a 34th top-level scorer as a broodmare sire, having also been in the same capacity through the French Guineas winner St Mark's Basilica.

Snowfall's dam, Best In The World, hails from an outstanding family introduced to the Coolmore and Ballydoyle ecosystem through the acquisition of her mother Red Evie, the top-class miler for Michael Bell.

Red Evie has produced the Arc and Breeders' Cup winner Found among four black-type performers to date - including Oaks third Divinely - with Best In The World earning her key piece in the Group 3 Give Thanks Stakes at Cork.

She visited Deep Impact on one further occasion prior to his death in 2019 and has a two-year-old full-brother to Snowfall named Newfoundland. Latterly she has been sent to be covered twice by Dubawi, and has bred a yearling colt by the Darley kingpin.

Somewhat newer to the Group 1 roll of honour is Harbour Watch, whose popular son Pyledriver showed his courage in the Coronation Cup.

Not a stallion who made a giant impact in his five years at Tweenhills prior to retirement in 2017, the unbeaten juvenile has had his finest hours through Waikuku, a dual Group 1 winner in Hong Kong.

Famously bought back for just 10,000gns at the sales by breeders Roger Devlin and brothers Guy and Hugh Leach, the colt from the smart French family of Normandel and Mont Ormel has recouped almost 40 times that sum with his exploits so far.

Medaglia D'Oro colt the main event at £675,000 as records fall at Arqana

Aidan O'Brien and Mick Kinane reflect on the career of Galileo

FIRST PUBLISHED 6:09PM, JUN 4 2021
Now 20 years on from Galileo's Derby victory he has a 34th top-level scorer as a broodmare sire