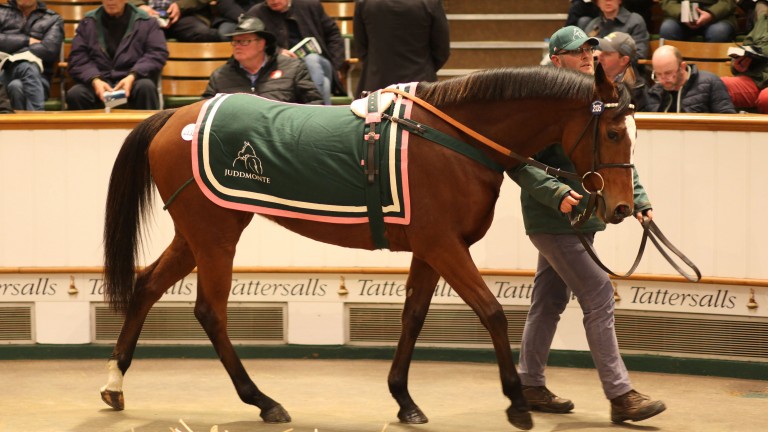 Juddmonte will offer a draft alongside Godolphin and Shadwell at the Tattersalls December Mares Sale
Laura Green
1 of 1
By Kitty Trice UPDATED 1:24PM, OCT 22 2021

High-class drafts from the likes of Godolphin, Juddmonte and Shadwell are among the attractions for the upcoming Tattersalls December Mares Sale, an event that also includes the dams of Newspaperofrecord and Dubai Honour as well as top-level-winning fillies such as Blond Me and Flotilla.

Godolphin's draft features mares in foal to leading sires such as Dubawi, Night Of Thunder and Siyouni, while the operation will also present Listed and Group winners in Sarinda and Under The Stars, who are both carrying to champion sire-elect Frankel.

Black-type winners Dancing Sands, Lady Liberty and Yellow Rosebud are also offered, in foal to Cracksman, Earthlight and Too Darn Hot, alongside Zam Zoom, a stakes producer who is in foal to Ghaiyyath.

Shadwell's 93-strong consignment - up from 57 last year, 29 in 2019, 30 in 2018, 27 in 2017 and 12 in 2016 as the operation continues to downsize following the death of Hamdan Al Maktoum earlier this year - will sell mares in foal to young sires Blue Point, Masar, Mohaather, Persian King and Pinatubo, as well as established stallions Dark Angel, Invincible Spirit, Kingman and Oasis Dream.

The Juddmonte draft is also highly anticipated and mares in foal to Frankel and Kingman are joined by full- or half-sisters to Group 1 winners Epicuris, Quadrilateral and Winsili as well as the winning Sea The Stars filly Not In Doubt, a daughter of multiple top-level heroine Intercontinental, a daughter of Juddmonte's blue hen Hasili.

Get a sneak preview of the broodmares, fillies in training and stallion prospects that Shadwell will be offering at the Goffs and Tattersalls Breeding-Stock Sales

Check out our digital catalogues https://t.co/KbGn8JSJF8

Dams of Group winners include Sunday Times, who produced top-class performer Newspaperofrecord and is in foal again to Lope De Vega, Mondelice, the dam of Group 2 scorer and Champion Stakes runner-up Dubai Honour who is carrying to New Bay.

Group 1-winning mares in foal include Amazing Maria, the highlight of Sir Robert Ogden's dispersal and carrying to Oasis Dream, plus Flotilla, Penelopa and Temida.

A star of Newsells Park Stud's outstanding draft is Group 2 winner Waldlied, a New Approach three-parts sister to Arc hero Waldgeist who is carrying to Kingman, and Cayenne Pepper, a daughter of Australia who struck in Group 2 company and finished second in last year's Irish Oaks for Jessica Harrington.

Tattersalls hairman Edmond Mahony said: “The Tattersalls December Mares Sale is an annual highlight of the global bloodstock sales calendar and this year’s catalogue, which features the dispersal of Sir Robert Ogden’s broodmares and fillies and major consignments from both Godolphin and Shadwell Estates, looks set to bring the Tattersalls year to an exciting conclusion.

"With buyers from the vast majority of countries now able to travel easily to Britain we look forward to welcoming the uniquely international cast of buyers for whom the Tattersalls December Mares Sale is an unmissable event every year."

French 1,000 Guineas runner-up Speak Of The Devil to be offered at Arqana

FIRST PUBLISHED 1:21PM, OCT 22 2021
We look forward to welcoming the uniquely international cast of buyers for whom the Tattersalls December Mares Sale is an unmissable event every year