Bloodstock Latest ACROSS THE DIVIDE

From trot to flat-out gallop: the story of Goshen's breeder Christophe Toulorge 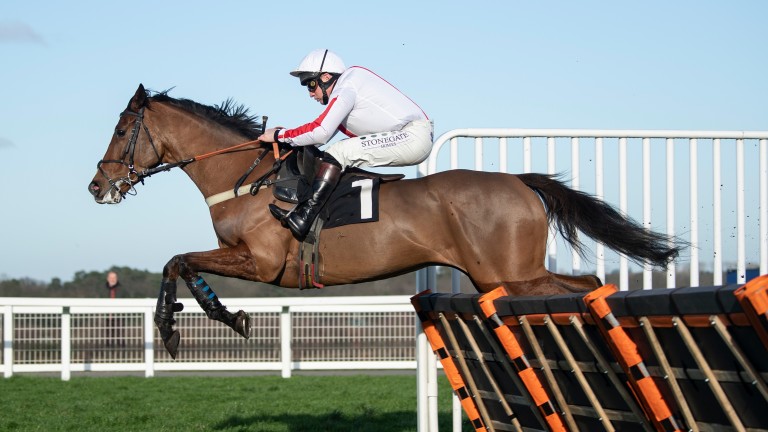 Goshen was bred by one of the major names in French trotting, Haras de Bouttemont's Christophe Toulorge
Edward Whitaker
1 of 1
By Scott Burton UPDATED 12:07PM, MAR 25 2020

The name Ready Cash may not ring too many bells in the thoroughbred racing world but to any aficionado of trotting or harness racing, he is Galileo and Dubawi rolled into one.

The man who manages Ready Cash's lucrative stud career at the Haras de Bouttemont in Normandy is Christophe Toulorge, a man steeped in the lore of trotting but who has never entirely let go of his love of the thoroughbred.

Like Galileo, Ready Cash's fee is a matter of private negotiation, though unlike the Coolmore stalwart, the admission of artificial insemination in the trotting world means he doesn't even need to be on the same continent as his potential mates. 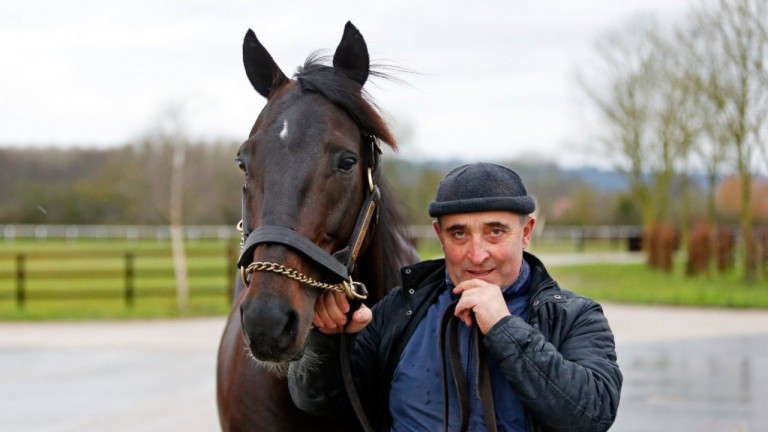 Christophe Toulorge and Bird Parker, the winner of more than €2m during his trotting career
Matilda Ohrman

But for Toulorge, the money he has available for his passion project has been governed by the progress of his biggest success as a breeder in the trotting world, Bird Parker, a millionaire twice over and the winner of four Group 1s.

Toulorge has reinvested the money in sending his mare Hyde not to sons of Galileo but to those of his former studmate Montjeu.

The fascination began with the choice of Montmartre for the mating which produced Elimay - a Grade 2 winner over fences against her own sex at Thurles in January for JP McManus and Willie Mullins - and progressed from there.

"I bred a trotter called Bird Parker, whose equivalent in racing would be the winner of an Epsom Derby or a King George," says Toulorge. "He was trained by my friend Philippe Allaire and his success allowed me to aim a little higher in terms of the stallions I could send my thoroughbred mare to. I have been able to use Camelot, Authorized and Nathaniel thanks to Bird Parker."

The question arises as to why Montjeu, though perhaps more importantly, why thoroughbreds at all for such a major figure in an  altogether different racing code.

"My mother's farm was right next to the Haras d'Etreham and when I was very small I went to see Lyphard cover his very first mare," says Toulorge. "I was always interested in thoroughbreds, even though I was first and foremost brought up in the trotting world. 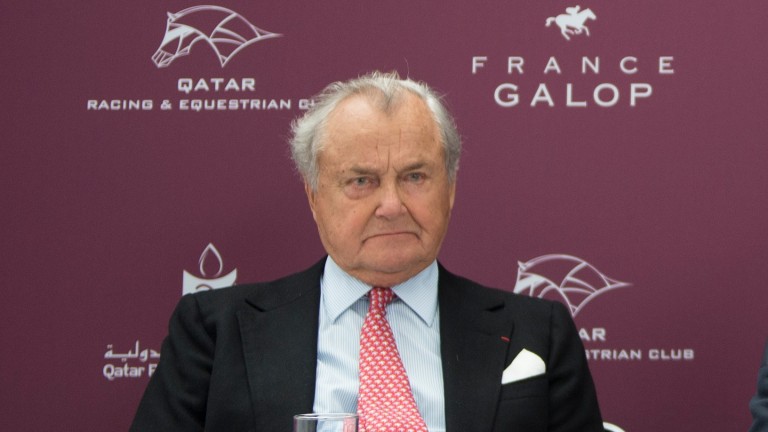 "I was fortunate to become friends with Alec Head, who is renowned the world over. If he raised cows he would be crowned champion at the Salon d'Agriculture, if he bred snails he would win the snail grand prix!

"He is someone who just understands the best taste in everything. He told me about Northern Dancer and he could see past faults to recognise that he had been an exceptional racehorse. He bought the first son of Northern Dancer over [to France] and that was Lyphard."

The friendship with Head lasts to this day and, having somewhat against orthodoxy commenced his thoroughbred breeding career with a 21-year-old daughter of Camarthen called Camarange, it was to Head he turned to share the risk.

Camarange produced one final foal for the partnership in Ryde.

And when Head passed the family breeding operation on to his son and daughters, he gave his old friend his share in Ryde's Poliglote daughter Hyde, who would become the dam of his two star pupils in Goshen and Elimay, who would become the second highest-rated mare of her generation in France before being sold to Ireland.

"Her trainer Carlos Lerner looked after her and he never really revved her up to try to beat Whetstone," says Toulorge. "He always had Elimay ridden to be placed - to win if possible of course, but never at all costs. I think if she had managed to beat Whetstone back then at Auteuil, it might have left a mark on her.

"I work with a pre-trainer called Philip Prevost-Baratte and he told me when she was two that she was something out of the ordinary. I needed to buy some extra land to extend my own small farm and so Charlie Swan came to see her before she went to the sales. I was honest with him about the price I would sell at. He shook my hand and said, 'I’ll see you later'." 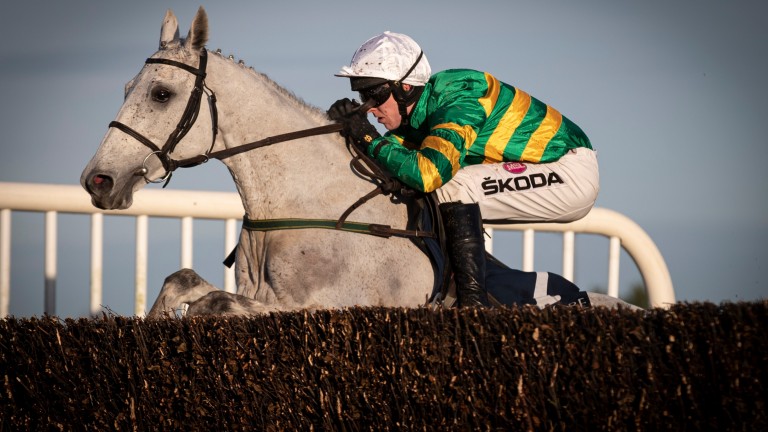 Swan's associate Hubert Barbe secured Elimay for €310,000 at Arqana's Autumn sale in 2017, a record for any horse sired by Montmartre.

Toulorge says: "Montmartre had something about him. He was maybe a little fragile but he was a very talented horse and was a very good winner of the Grand Prix de Paris and on top of that is a son of Montjeu, who I think would have outstripped Galileo had he lived longer.

"Montmartre had that Linamix element and was from a marvellous Lagardere family. Christophe Soumillon told me one day over lunch that if Montmartre had made it to the Arc in good form in 2008, he couldn't have been absolutely sure he would have ridden Zarkava."

Elimay had promising genetic material and a fine education but Toulorge reserves his highest praise for Mullins.

"It’s like in trotting, where there are four or five Classic trainers that are really capable of improving a horse," he says. "Anyone can work to compensate for a horse's weaknesses but when you have a very good horse, to make them even better, to build on their strengths, that is much harder and very few people can do it."

With the increasing success of Bird Parker, Toulorge selected Authorized for Hyde's next cover, and professes nothing but awe for Goshen, who was bought privately to go to Gary Moore by Nicolas Bertran de Balanda as an unraced two-year-old.

'Ooh la la! Goshen must be some horse'

Mention of his mesmerising performance in the Triumph - as well as his desperately unlucky unseat with the race as his mercy - elicits a lengthy "ooh la la!" 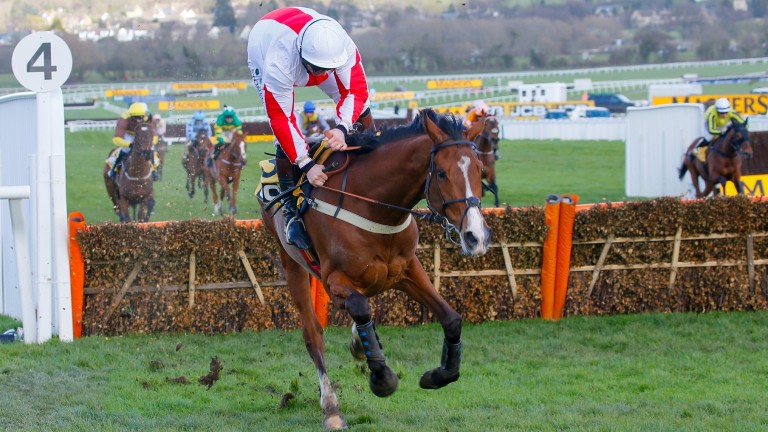 The beginning of the end: Jamie Moore loses contact with Goshen after the final flight in the Triumph
Mark Cranham

Toulorge says: "Obviously it's a shame. It's like a careless brushstroke spoiling a painting or a fresco. I was disappointed but at the same time I thought it was wonderful.

"Not the unseat of course, but I knew watching that this was some horse. The way he dominated his rivals and mastered the ups and downs of Cheltenham, he must be.

"Luckily, I have two more daughters from Hyde. I have a three-year-old with Francois Nicolle who is the full-sister to Goshen and who the trainer tells me is very good. She is called Harrisburg and Francois says she has real spirit, real soul and he is very pleased with her.

"Somoli, the two-year-old filly by Camelot, went to Philip Prevost-Baratte last July and is now back with me before being sent to Philippe Allaire's daughter, Elisabeth, who is in the process of setting up as a trainer.

"Last Wednesday night Hyde gave birth to a colt by Nathaniel and this year she is promised to Goliath Du Berlais." 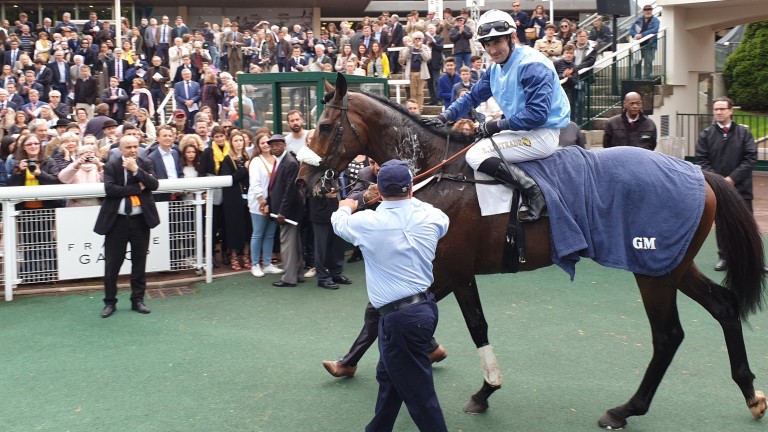 The choice of Etreham's second-year inmate marks a return to the start of the story geographically, though as a son of Saint Des Saints he will break the monopoly of Montjeu blood in the family.

Despite now having the means, thanks to Bird Parker, Elimay and Goshen, Toulorge has is not tempted to grow, while until and unless Harrisburg and Somoli are retired to the farm, Hyde is the only thoroughbred in his current broodmare band of five.

"I never wanted to build a big operation," he says. "You have to love horses first and foremost. They can disappoint you sometimes but if you don't love and appreciate them, you'll get nothing in return.

"But if you are passionate about horses, and you have a little bit of money you can afford to sacrifice, then with luck you can have some success."

Both Goshen and Harrisburg are named after historic sites in North American trotting. Situated in upstate New York, Goshen is home to the Harness Racing Museum & Hall of Fame as well as a track dating to 1838, while Harrisburg is the home of one of the major Standardbred sales in the US.

The theme is continued with Somoli, named in homage to US trotting's greatest blue hen broodmare Somolli, the producer of 11 Grade 1 winners from 14 horses to race.