Best of Bloodstock A TRUE GREAT 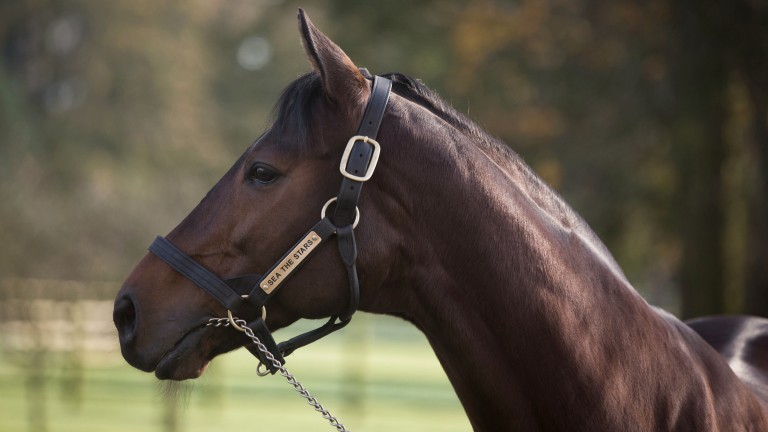 This article was originally published on August 25, 2018

Sea The Stars' smooth transition from world champion racehorse to stallion sensation has been a pleasure to follow for even a casual follower of pedigrees; so imagine the sheer delight experienced by those closest to the horse in a week such as this, when he has supplied the breathtaking Yorkshire Oaks heroine Sea Of Class and the decisive Lonsdale Cup winner Stradivarius, whose victory triggered a seven-figure payout for the Weatherbys Hamilton Stayers' Million bonus.

For Pat Downes, who manages the Aga Khan's Irish studs and has therefore overseen Sea The Stars' second career since he retired to Gilltown in 2010, there is a palpable sense of relief as well as relish.

“I think back to when he came here first. He was such an outstanding racehorse with an impeccable pedigree so he ticked all the boxes, but that still doesn't guarantee you'll have a successful stallion,” he says. “Thankfully, in this case, it has certainly all worked out.”

Sea Of Class and Stradivarius, who took the York Ebor meeting by storm, are among nine Group 1 winners by Sea The Stars from six crops of racing age. His other greatest hits are the dual Derby victor Harzand, Oaks and King George winner Taghrooda, runaway German Derby scorer Sea The Moon and Prix Ganay winner Cloth Of Stars, an honourable runner-up in the Arc last year. 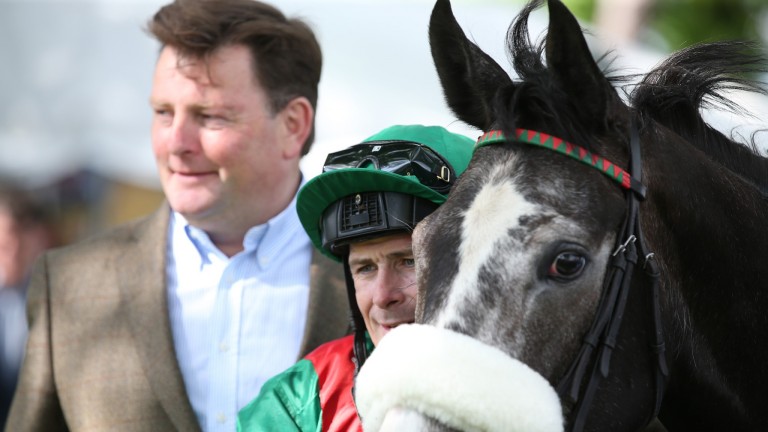 Sea The Stars – a Cape Cross half-brother to fellow Derby winner and Classic sire Galileo, of course – has enjoyed a particularly fruitful season in 2018, with Crystal Ocean taking the Hardwicke Stakes and running second in the King George, and Knight To Behold and Night Music also striking at Group 2 level.

“He's working well with an array of sire-lines, which is a positive thing,” Downes points out, and that view is supported by the fact only two of those nine Group 1 winners are out of the same damsire. For the record, they are Cloth Of Stars and Zelzal, both out of Kingmambo mares; although it might also be noted that Harzand is out of a mare by Xaar and Prix Saint-Alary winner Vazira is out of a mare by Xaar's sire Zafonic.

Sea The Stars has also nicked with Sadler's Wells mares to produce the likes of Taghrooda and Knight To Behold, although Sadler's Wells' ubiquity means he features as the damsire of winners by just about every name in the Stallion Book he is not directly related to.

What reinforces a standout year for Sea The Stars is that, having not thus far been noted as a source of precocity, he has fared better in that department this summer.

He has five two-year-old winners to his name from his 2016 crop, including Layaleena, who triumphed on debut at Newmarket for Sir Michael Stoute on Friday; Fox Tal, a close fourth in the Listed Stonehenge Stakes at Salisbury later that day; and Star Terms, who has won her last two starts for Richard Hannon.

“Sea The Stars always gets those nice juvenile winners towards the end of the season, but this year we appear to be seeing some earlier types than in other years,” says Downes. “We're in August and we've already seen several smart performances.

“It's good to see, because I think as far as his own profile goes, that's the final piece of the jigsaw.” 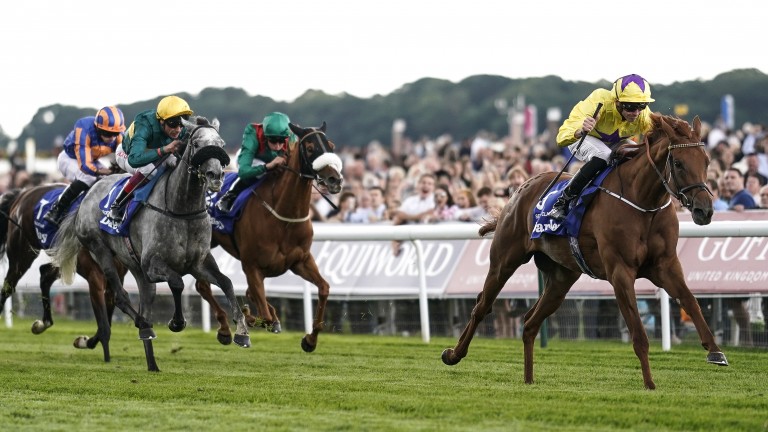 Overall though, middle-distance horses and stayers seem to be Sea The Stars' forte, which makes him the perfect fit for the Aga Khan Studs, where Classic breeding is cherished above producing here today, gone tomorrow types.

Downes acknowledges the paradoxical nature of so many breeders striving to produce sharp and speedy sorts despite it being those who excel over further than a mile who most excite owners and the wider racing public. For evidence, see the adulation lavished on Sea Of Class and Stradivarius this week, and on Sea The Stars himself nine years ago.

“It's evident that there isn't a balance between breeding for speed and for stamina, and in some ways I fear we're breeding ourselves into a fairly narrow tunnel,” Downes says.

“It's purely my personal feeling, but I absolutely love watching middle distance horses and stayers racing, and when you speak to people about what races they'd most like to breed the winners of, you don't often hear sprints.

“The most coveted races around the world tend to be over ten or twelve furlongs, but unfortunately there aren't enough people who want to breed those horses.”

However, there is light at the end of the narrow tunnel, Downes adds.

“I suppose it's gone hand in hand with the demise of the traditional owner breeder, and I can understand that commercial breeders are producing what they believe the market is asking for,” he says. “But I think Stradivarius winning the million bonus, and the fact it was won in its first year of operation and has been shown to be doable, raises the profile for that category of horse.

“It will be like a liner turning, it won't happen overnight, but if we have people coming up with these initiatives it will get people to appreciate these staying races are wonderful to participate in, and we need breeders who'll produce the horses who can win them.”

Sea Of Class and Stradivarius were most unlike a liner turning as they stormed to success in the space of 24 hours of each other on the Knavesmire this week, although the paternal siblings displayed very different qualities in doing so.

There were shades of her old man as Sea Of Class sauntered past her Yorkshire Oaks rivals a furlong out and was pushed out to score with plenty in hand, while Stradivarius had to dig deep to repel Count Octave in the Lonsdale Cup in a manner that we perhaps only saw once during Sea The Stars' golden three-year-old season: when he had to knuckle down to fend off Rip Van Winkle in the Eclipse.

Looking back on Sea The Stars' renowned tendency to do just enough in his races, Downes says: “To be fair I think [jockey] Michael Kinane had a lot to do with that because he had absolute confidence in the horse, and what allowed the horse to win a Group 1 every month between May and October that season was that he always kept a bit up his sleeve.” 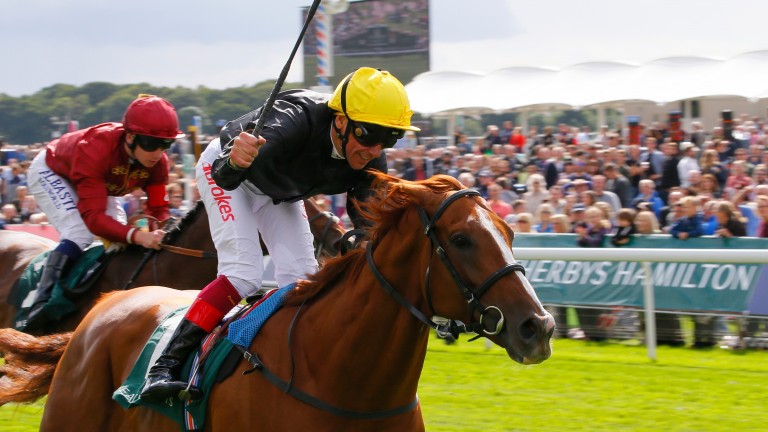 Stradivarius: becomes a stayer in a million with Lonsdale Cup victory
Mark Cranham

More to the point, it is Sea The Stars' turn of foot and sheer class that Sea The Stars is passing on “in spades”, he adds.

The class and turn of foot that Sea Of Class has shown has put her firmly in the frame for the Arc, which would complete an extraordinary three-generation sequence of victories for her owners the Tsui family in the Longchamp spectacular. Sea The Stars carried their yellow silks to victory on his swansong, 16 years after his legendary dam Urban Sea had beaten the colts to win the race.

“That would be fairytale stuff, but not impossible. She was very impressive this week,” says Downes. “We had her here until last Christmas, she spent a year with us. I'd love to say I knew what we had, but that wouldn't be the truth, although it can safely be said she was always a nice filly.”

The stakes were high when Sea The Stars retired to stud as the best and most adored Flat performer since Dancing Brave, but the superstar progeny mentioned within this article – not least Sea Of Class and Stradivarius – illustrate he has lived up to even the loftiest expectations.

“When we're showing the horse during open days and I'm there listing his achievements, it still surprises me each time what he managed to do in his three-year-old season,” Downes reflects.

“He had such strong credentials you just wanted him to succeed as a stallion so much. And he's done it.”

Mare returns recorded with Weatherbys and available to view on the administrators' Bloodstock Reports facility show that Sea The Stars covered 162 mares at his new high fee of €135,000 at Gilltown Stud this year.

He also covered the dam of Group 1-winning siblings Forever Together, Lord Shanakill and Together Forever, as well as those mares who produced Desert Skyline, Dominant, Quorto, Masked Marvel, Sea The Moon, Silasol, Study Of Man, Taghrooda and Zelzal.

Sea The Stars youngsters for sale

There is no shortage of choice of Sea The Stars yearlings at the coming sales, for those buyers who want a Sea Of Class or Stradivarius of their own.

The first chance to buy one is at the Goffs UK Premier Yearling Sale on Wednesday, when Grove Stud offers a filly whose third dam is Prix de la Foret winner Field Of Hope.

Three by the sire are set to come under the hammer at Baden-Baden next week, including a daughter of German champion two-year-old Monami, and then a pair of fillies are on offer at the Tattersalls Ireland September fixture.

Later in the autumn there are large drafts of Sea The Stars yearlings at Goffs and Tattersalls.

Tony Morris: 'Sea The Stars is one of the best horses I've ever seen'

FIRST PUBLISHED 2:30PM, NOV 23 2018
He's working well with an array of sire-lines, which is a positive thing