Red letter days for Galileo Gold and Adaay at Deauville 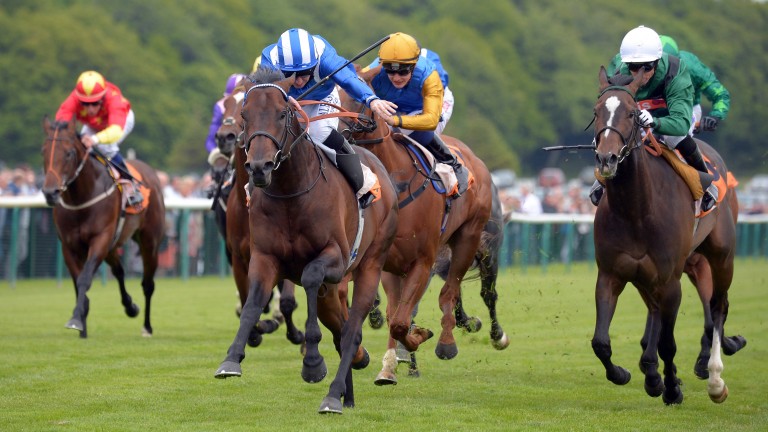 A terrific card at Deauville on Tuesday enabled two sires to embellish their records with a first Group victory as both Adaay and the freshman Galileo Gold got on the scoresheet.

The former, a smart sprinting son of Kodiac, is into his second season with runners from Whitsbury Manor Stud and landed his maiden stakes scorer as Have A Good Day made it just that with a battling performance in the Group 3 Darley Prix de Cabourg.

Withdrawn from one online sale last year, the juvenile filly and half-sister to three-time winner Lady In Question is now owned by Con and Theresa Marnane and trained in France by Florian Guyader.

Adaay, who was standing at £5,000 this year, is already the sire of 43 different winners around the world.

Qipco 2,000 Guineas winner and Tally-Ho resident Galileo Gold, who is standing at €5,000, has already made a swift start as a stallion with two Listed winners.

Oscula, who was George Boughey's breakthrough Group winner as she took the Prix Six Perfections, was his latest milestone.

The filly, who also won the Woodcote at Epsom and placed in the Albany Stakes at Royal Ascot, was bought for just 4,000gns by Michael Aguiar at last year's Tattersalls Book 4.

Bred by Padraig Williams, she is the first foal to race out of the Big Bad Bob mare Bisous Y Besos.

FIRST PUBLISHED 5:14PM, AUG 3 2021
Guineas winner and Tally-Ho resident Galileo Gold, who is standing at €5,000, has already made a swift start as a stallion