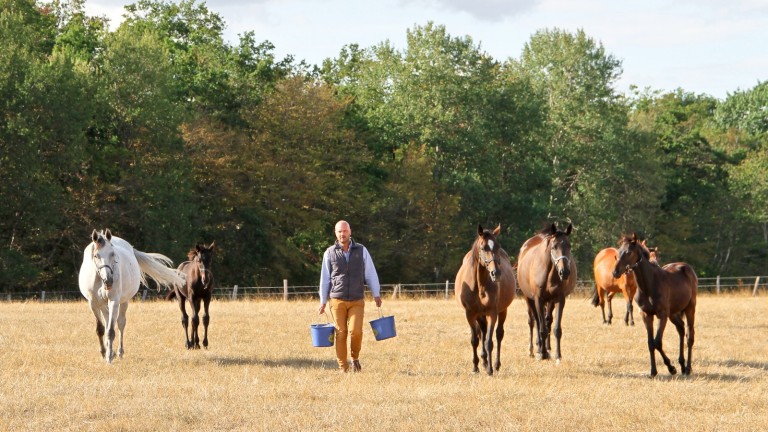 It takes a fair bit of ambition to leave your home in rural Burgundy at the age of 17 to discover the United States, with little more than a saddle and a talent for riding

Bertrand de Soultrait left the Nievre - the cradle of AQPS breeding in France - though throughout a successful career in commercial real estate based in New York, neither the Nievre nor the horses ever really left him.

In 2016, when he sold his brokerage, the magnetic pull of a second career as a breeder of either racehorses or showjumpers proved irresistible.

Less than four years later Soultrait and his fiancee Hermine Delourme can look out over 100 hectares of an entirely new structure at the Haras de Toury, a former run-down cattle farm brought to life with some serious investment, as well as two new stallions.

Sageburg arrives at an opportune moment, with the fruits of his big Irish books covered at Garryrichard Stud beginning to make an impact on the track and confirming his conversion from dual-purpose sire to a producer of high-class jumping stock.

Less obvious in terms of profile but hugely exciting in terms of bloodlines is Morpheus, an Oasis Dream half-brother to Frankel and Noble Mission.

Both are owned by Jean-Pierre Dubois, a breeder of global renown who holds the rare distinction of having raised Group 1 winners in trotting, on the Flat and over jumps.

The link-up is a demonstration of just how eager Soultrait is to provide serious competition for the nearby Haras de Cercy, the current engine room of jumps breeding.

“Jean-Pierre Dubois told us we were in the best part of the country for breeding steeplechasers, surrounded by the best French jumps mares, and with only the Haras de Cercy nearby," says Soultrait.

“They do a great job but they are the only ones and so they have 100 per cent of the market." 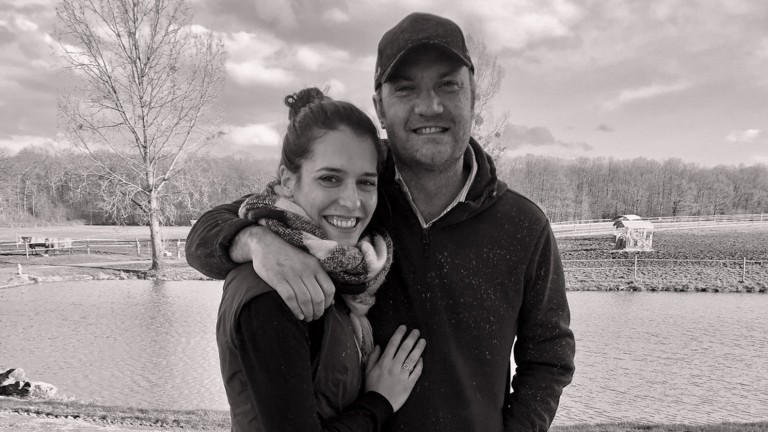 Toury is home to a fluctuating population of 14-20 mares, and in 2019 every foal born on the farm had been sold by the time they reached six months.

Soultrait continues: "The one thing I brought back from America was a belief in customer service.

“The quality of the stallion is one thing, and the customer service is another that’s very important to me. We are very open to the breeders.

“Some of our clients don’t need to sell their foals to make a living. Either they have big cattle farms or they own some real estate, or they work in Paris and they come down at the weekends. It’s a pleasure for them to come and see their mares and the stallions.

“As for the quality of the stallion, I thought, ‘Let’s work with the best. Let’s go and see a man like Jean-Pierre Dubois, see what they have, and then make a deal.'”

Sageburg, now 16, began his career in France and among his early crops he produced decent Flat performers, such as the Group 2-winning fillies Spain Burg and Peace Burg. 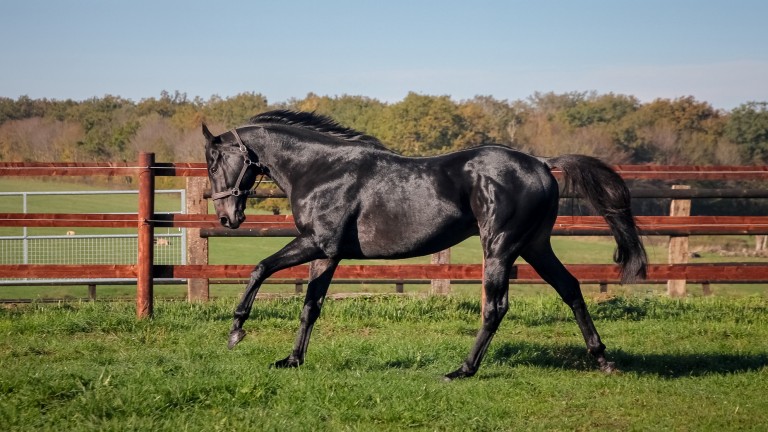 Sageburg: Rouge Vif just one of the horses putting his name in lights
Kevin Simonet

But his Irish-bred jumps progeny have hit an even richer vein of form, headed by the Harry Whittington-trained Rouge Vif, while Broomfield Burg won by four lengths on his pointing debut at Castletown last month, and was snapped up by JP McManus for £90,000 at the recent Goffs UK Yorton Farm point-to-point sale.

“When we made the decision [to buy Sageburg] we were a bit in between because he covered so many mares in Ireland but with not many results to look at," says Soultrait.

"However, in the last month they’re starting to look very strong. We knew what he’d done in France with the mares he covered here and the results were really high-quality foals.

“Our idea with Sageburg is to mate him to those big AQPS mares, that are deep-bodied and with good bone. That looks a good cross, whereas I don’t believe he would suit smaller mares.

"That’s the reason to bring him down to Burgundy, where those sorts of big, strong AQPS mares are.

“I have Rouge Vif’s dam and his three sisters at home. The dam looks like a sports mare, a big showjumping type. That’s what we’re looking for.”

Soultrait’s grandfather Roger was one of the five people responsible for developing AQPS (non-thoroughbred) horses and was the breeder of Grade 1 winner Monoalco.

The family business was allowed to slide after his death in 2001, meaning Soultrait had to start from the ground up on his return in 2016.

But for all the innovation those early AQPS pioneers brought to French jumps breeding, it is doubtful any would have tried Morpheus as a stallion prospect. 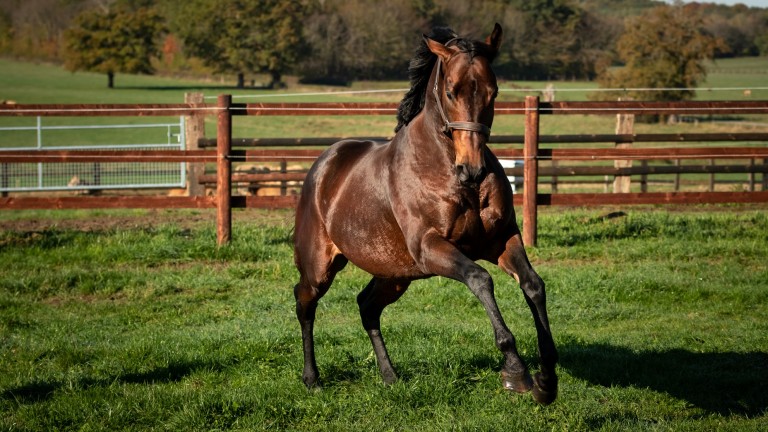 “He complements the other stallion because he is a bigger, scopier horse than Sageburg," explains Soultrait. "I’ve seen some of his foals and they're very impressive. He had a section winner at the big AQPS show at Le Lion-d’Angers this year.

"He can be paired with mares that maybe are a bit light and need some scope. And [his dam] Kind has produced three stallions, which is unheard of.

"You look at Frankel, Noble Mission and him, and then you’ve got the sister, Joyeuse, who was a Group winner as well. The family is quite unbelievable.

"He will bring some speed in there, and also some spirit. I’ve seen a few run in Britain and they are real fighters with good minds. Also, when you're looking to sell foals to Ireland and Britain, they need to have some size about them." 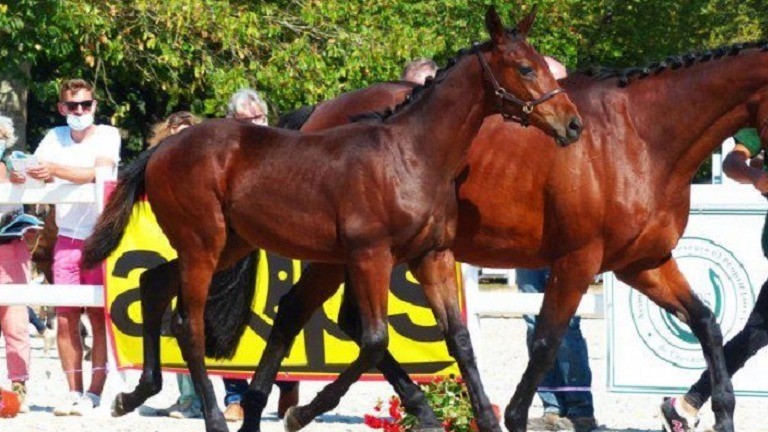 The ten-year-old won three of his eight races, though unlike his illustrious siblings, handicaps were his celling.

"He was not a champion on the racetrack but we’re not worried about that, neither was Cokoriko," affirms Soultrait.

"Morpheus didn’t work out producing two-year-olds [for the Flat], which is I guess why Tally-Ho didn’t want to keep him.

"I think we have a good chance to make older, stronger chasers.”

No News leads trade at Arqana

FIRST PUBLISHED 6:14PM, NOV 21 2020
The one thing I brought back from America was a belief in customer service