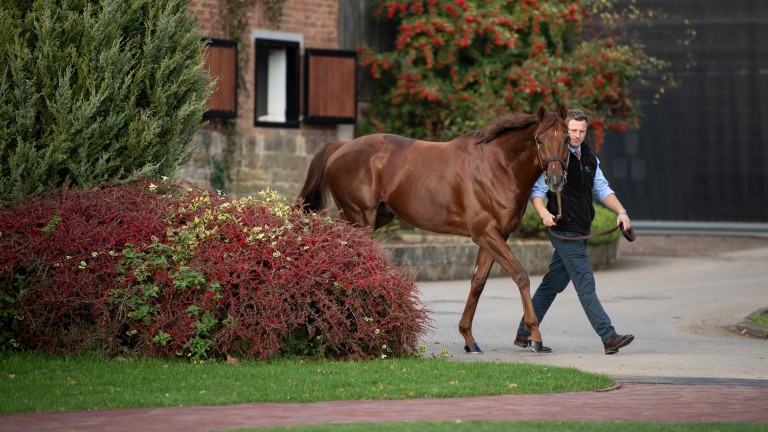 Lightning Spear at the picturesque Tweenhills Stud
Edward Whitaker
1 of 1
By Martin Stevens UPDATED 5:27PM, MAY 10 2020

Tweenhills is next in our popular series of virtual tours of Britain's most prestigious studs, produced in association with Great British Racing International to liven up lockdown.

David Redvers' operation in Gloucestershire is home to stallions Charm Spirit, Havana Gold, Hot Streak, Lightning Spear and Zoustar, and is the base of Sheikh Fahad and his family's Qatar Racing operation.

In the video, stud manager Pieter Van Zyl shows us the Group 1-winning sprinter Mabs Cross, a new addition to the farm this year.

Yearling manager Scott Marshall presents a Frankel colt out of Qatar Racing's Classic-winning mare Simple Verse, and Redvers himself showcases a Zoustar filly foal out of Stella Blue, making her a half-sister to the classy sprinter Sirius Prospect.

Thanks to all the team at Tweenhills for filming the videos while adhering to government rules on social isolation on the stud.

From Gloucestershire we head east to Newsells Park Stud in Hertfordshire for next week's videos, starting with a glimpse of the operation's golden goose Shastye.

'Thrilled' - Palin leaves Arqana with big dreams after securing Almanzor colt 'Night Of Thunder is very much a horse to target to buy yearlings by' Party host and winning breeder, it was a big weekend for Gerhard Schoeningh 'It's more what you can get your hands on' - Star Bloodstock on the Arqana mark 'They've got fast pedigrees and they're both by very good sires' 'That price was over my expectations' - €1.6m Shamardal colt leads way at Arqana