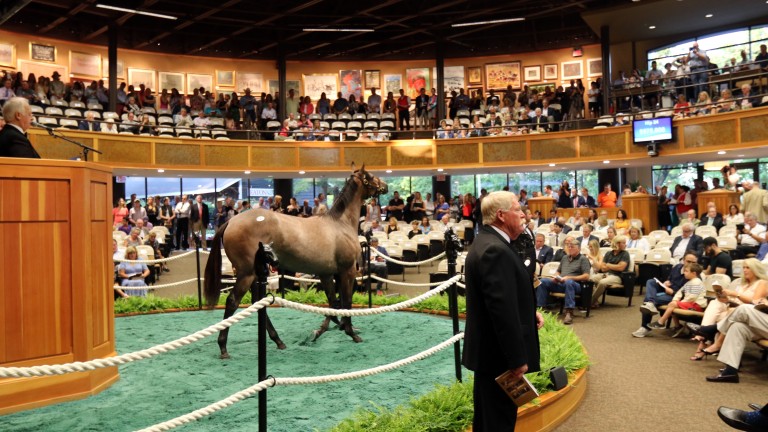 Carrying the mantle of a century of remarkable history while operating in the topsy-turvy times of Covid might make some auction houses more than a little nervous.

Not so for Fasig-Tipton Co, which will host the 100th edition of the Saratoga selected yearling sale on Monday and Tuesday in a milestone centennial unequalled by any other North American thoroughbred yearling auction.

Rather, as executive vice-president Bayne Welker put it, "we are probably as giddy as a bunch of schoolkids at recess".

The 210 catalogued yearlings chosen with emphasis on conformation are so strong, along with what Welker described as “pent-up demand” for good quality stock and the fizzy Saratoga lifestyle put on hold last year – as was this auction – due to Covid, that company officials are flush with upbeat expectations.

Adding extra zest are some of the first yearlings to come to market by Triple Crown winner Justify, who had 14 initial entries in the catalogue, including a half-brother to Belmont Stakes winner Tapwrit and a half-sister to Kentucky Oaks victress Princess Of Sylmar.

The catalogue also features 19 yearlings by America’s top sire, Into Mischief, and a further 15 by the outstanding Uncle Mo, as well as the offspring of six additional exciting first-crop stallions including champion Good Magic and Breeders’ Cup Juvenile Turf winner Mendelssohn.

"We’re very, very proud of this group,” Welker said while also reflecting on the grand traditions of the Saratoga Springs, New York, sale whose graduates include the likes of legendary Man o’ War and Triple Crown winner American Pharoah within a veritable pantheon of champions.

"This is the only time we’re ever going to have the 100th edition of this sale, and we’re excited because we feel like we’ve put together a great catalogue and the market seems poised to want to participate, so we are just sitting here with anticipation, waiting to see the activity and final results," said Welker.

Even if a surge in the Delta variant of the Covid virus accelerates, Welker is optimistic the sale will be conducted without problems.

"Even during the peak and worst times of Covid, we’ve managed to be able to adapt to whatever the situation was and put on sales successfully and effectively and carefully and not have any ill effects," he said.

"We have certainly learned enough through this era to know how to operate, and we can be very adaptable at the drop of a hat. I have 100 per cent confidence that we can manoeuvre and will be able to work our way through whatever twists and turns there may be." 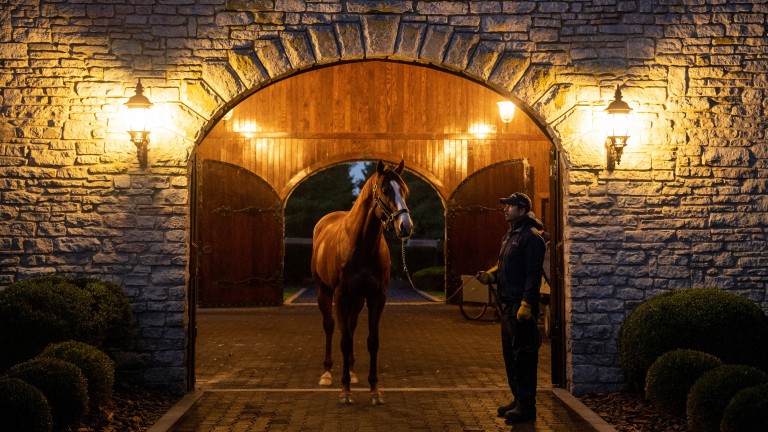 Justify’s first yearlings will undoubtedly provide the sale – which reigns as America’s leading venue by percentage of Grade 1 and Graded stakes winners from yearlings sold – with pizzazz, as did the first crop by American Pharoah when they appeared in this market in 2018.

From 15 by American Pharoah catalogued for that sale (with ten ultimately offered), there were two sold for $1 million or more, another three for over $500,000 and one colt that went on to be a Breeders’ Cup winner, Four Wheel Drive. The average sale price was $554,500.

"Hopefully we at least get to that or do better with this crop by Justify,” Welker said of the sire who managed to lead all North American sires of sale weanlings in last year’s Covid-hampered market.

"They are big, strong, durable-looking horses, and I think they are going to have great appeal. He’s an extremely handsome horse in his own right, and I think what you will see by the end of the year, from that whole crop, is that a lot of the sire is going to come through in those offspring. I think those people who bred to Justify will be rewarded."

Bloodstock agent Mike Ryan, who is spending an extended time in Saratoga and has already observed a palpable "buzz" in the area along with a "great desire" among owners to buy top young prospects, said: "Justify is one of those horses who could be capable of siring anything."

Following his Coolmore Ashford Stud stablemate, American Pharoah, who has gained quick success globally with his progeny, Justify also has the credentials to appeal to buyers around the world.

As what Coolmore validly bills as "the best son" of the late Scat Daddy, he has a genetic right to sire successful runners on dirt and turf.

"His offspring have got a lot of size and scope and substance to them," said Ryan. "He’s a top, top dirt horse and that’s what everybody wants in this country. And I’d say he would have been a machine on the turf – on firm turf anyway. 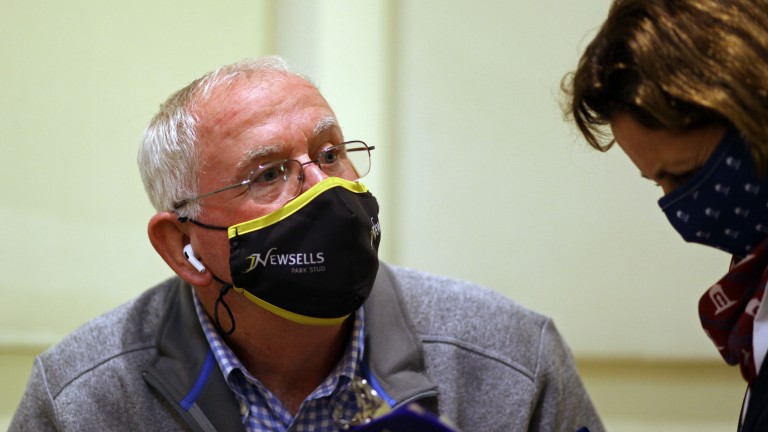 Mike Ryan: 'Justify could be capable of siring anything'
Laura Green

Both the colt who is a half-brother to Tapwrit (hip 41, a bay out of Grade 1 winner Appealing Zophie) and the filly who is a half-sister to Princess Of Sylmar (hip 204, a chestnut who was a $370,000 weanling RNA) were bred in Kentucky by David and Diane Nagle’s Irish-based Barronstown Stud.

Buyers who like the multi-surface success of the Scat Daddy line will also find seven yearlings from the first crop by Mendelssohn in the Saratoga catalogue.

"Being a half-brother to Into Mischief doesn’t hurt Mendelssohn at all," said Ryan with a laugh of the stallion’s potential and market appeal; Mendelssohn himself was a $3m yearling purchase by Coolmore, which bills him as "the best-bred son of Scat Daddy".

Ryan is also enthusiastic about Good Magic, the 2017 Breeders’ Cup Juvenile winner by Curlin that he selected for e5 Racing as a $1m yearling. There are nine yearlings in the catalogue by Good Magic, who was raced in partnership with breeder Stonestreet Stables.

Ryan said of the Good Magic yearlings he has seen to date: "They’ve got good quality to them; they have nice shapes, and they’ve got very good minds. They’re a lot like him."

Other first-crop sires represented by Saratoga-catalogued offspring include City Of Light and Bolt D’Oro. The latter, a son of Medaglia D’Oro who was twice a Grade 1 winner at two, has 13 in the sale including hip 132, a colt who is a three-quarter brother to Horse of the Year Rachel Alexandra.

While the young stallions will draw attention, the yearlings by Into Mischief come with the cachet of being by the leading sire, one who can get sprinters, Classic winners and superior runners on dirt and turf. While 19 is a large number for this catalogue, Welker said Fasig-Tipton would have happily taken more.

He said: "He is in such demand with a broad range of the market. You show me someone who would not want an Into Mischief in their barn and I would probably have to stop and scratch my head and ponder that for a while."

Among the intriguing Into Mischief yearlings is hip 38, a bay colt whose third dam is Urban Sea and whose immediate female family features Cox Plate winner Sir Dragonet and stakes winners and European Classic-placed females Wonder Of Wonders and So Wonderful.

Curlin, Medaglia D’Oro and Tapit, all of whom have had offspring that topped this sale in recent years, are respectively represented by five, four and six yearlings.

American Pharoah has three yearlings in the catalogue, including hip 102, the full-sister to the aforementioned Four Wheel Drive.

FIRST PUBLISHED 6:15PM, AUG 6 2021
This is the only time we’re ever going to have the 100th edition of this sale, and we’re excited because we feel we’ve put together a great catalogue