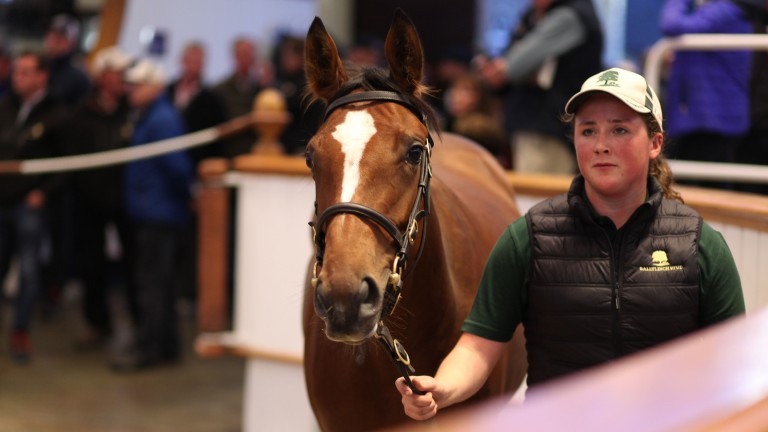 Anthony Stroud got the better of a six-figure tussle with Tom Goff as the Lope De Vega sister to Oviedo topped the concluding session of Book 2 of the Tattersalls October Yearling Sale at 650,000gns.

A bustling Park Paddocks ring looked on as the rival camps traded increasingly expensive blows as each of Goff's 25,000gns increases, delivered from the middle of the packed gangway, came after discussion with Coolmore’s Paul Shanahan.

However, the outcome never really looked in doubt as Stroud repeatedly reappeared from behind the partition to respond in kind with an assertive nod of the head. 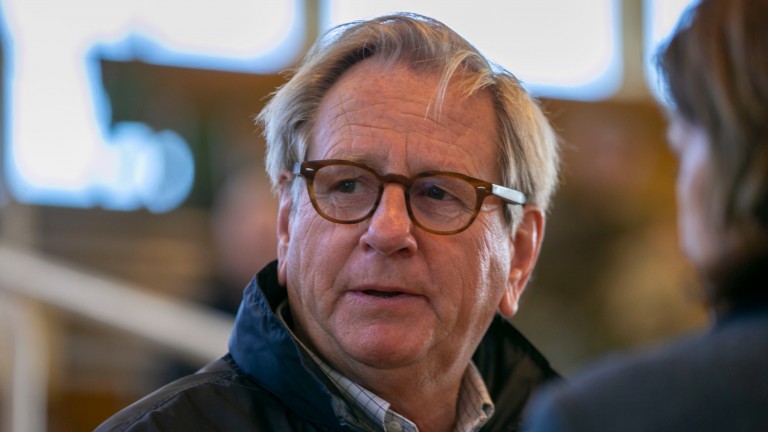 Anthony Stroud: "That would have been my last bid"
Laura Green

The filly is out of Gallitea, whose first foal, Oviedo, was catalogued as a winner but collected black type when running third to Dewhurst hero Chaldean in the Group 3 Acomb Stakes. She becomes the second-most expensive filly sold in Book 2 history, behind only the auction record setter Tarhib, who sold to Shadwell for 1,050,000gns in 2019.

“It’s exciting as she’s a very nice, athletic filly,” said Stroud after receiving some good-natured ribbing from his rival bidders. “There was a good update in the pedigree and she’s for Godolphin. That would have been my last bid.”

In turn, Gallitea is out of Danielli, making her a sibling to three black-type performers, most notably the ill-fated Fillies Mile and Breeders' Cup Juvenile Fillies Turf heroine Chriselliam and the three-time Group 2 winner Very Special, who is closely related to the six-figure filly as another daughter of Lope De Vega. 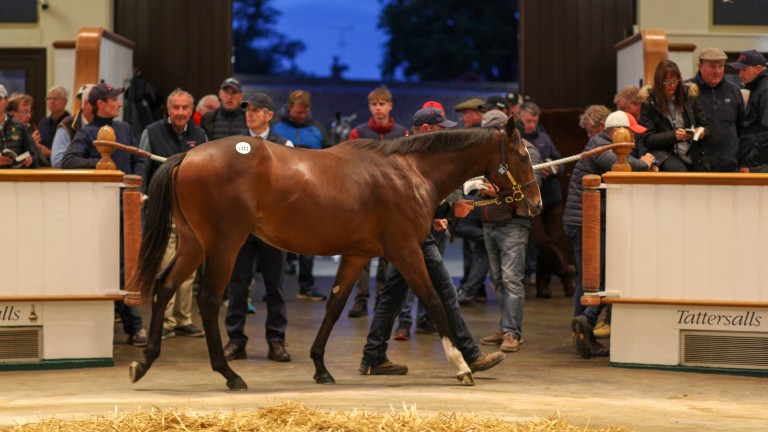 The filly was bred and offered by Ballylinch Stud, who also presented the New Bay colt out of Fact Or Folklore who went Stroud’s way at 425,000gns earlier in the session.

The youngster is a sibling to two winners, including Statement, who has won a Listed contest and the Group 3 Concorde Stakes since the catalogue was released. Further updates could be in the offing as the colt’s other sibling, the twice-raced Self Belief, is due to run in the Listed Trigo Stakes at Leopardstown on Saturday.

“This particular horse has a beautiful temperament and he’s a lovely, free-moving, well-balanced individual,” said Ballylinch’s managing director John O’Connor. “A few things kicked off out here in the parade ring and he handled it very well. I think he’s got a racehorse mind and that’s the thing with these New Bays, the trainers like working with them.” 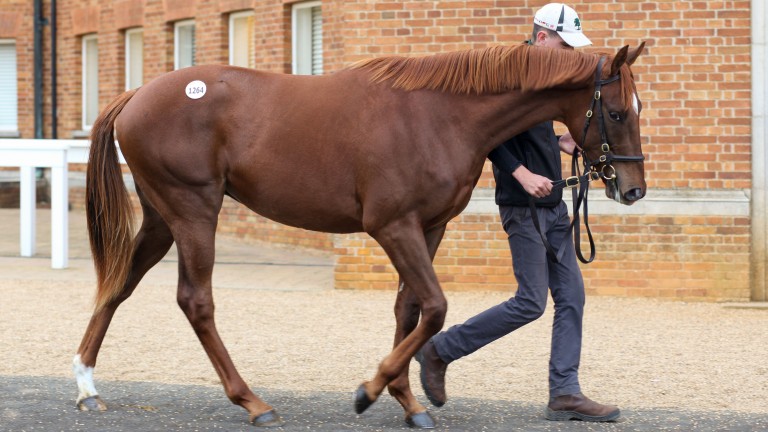 The New Bay colt out of Fact Or Folklore who was hammered down for 425,000gns
Laura Green

Ballylinch resident New Bay is regarded as one of the most upwardly mobile young stallions around and duly covered his 2022 book of mares at a career-high fee of €37,500.

O’Connor added: “With the calibre of mares New Bay is covering now, he has the opportunity at least to step to a higher level again. Obviously every horse still has to take that opportunity, but we believe he can.”

New Bay’s record of 17 stakes performers is headed by Jane Chapple-Hyam’s dual Group 1 winner Saffron Beach, and Stroud’s purchase is set to head into training with the same trainer.

“He was bought for Peter Harris,” said Stroud. “Peter very much has his own system [for buying] and we work together. He’s actually my oldest client, I’ve worked with him for 40 years, which makes me very old and him a little bit older!”

Stroud Coleman Bloodstock ended the three-day sale as the leading purchaser, with 23 lots secured for an outlay of 5,625,000gns.

Just as had been the case at Book 1, the three-day Book 2 finished with unprecedented returns across the range of market indices.

There was a slight drop in the clearance rate, down two points compared to last year, albeit the final figure of 86 per cent as 633 lots found a buyer still represents a perfectly healthy outcome.

Knight back in business

Backed by his mystery client, Richard Knight was back in the thick of the action on Wednesday evening when outlasting Amanda Skiffington at 600,000gns to secure the Starspangledbanner colt out of Great Dame from Ballyvolane Stud.

Bred by The Great Dame Partnership, the youngster is the first foal out of the daughter of Dandy Man, whose two juvenile successes include victory in the Lily Agnes Stakes.

The mare, a sister to the Group 3-placed De Boss Man and a half-sister to the Group 2-winning Donnerschlag and Listed scorer Izzy Bizu, last changed hands at public auction for just 28,000gns when signed for by Barry Lynch in 2019.

“He was the only horse we really picked out in this sale,” said Knight. “We thought he was a lovely individual and I’m a big fan of Starspangledbanner having bought The Wow Signal. 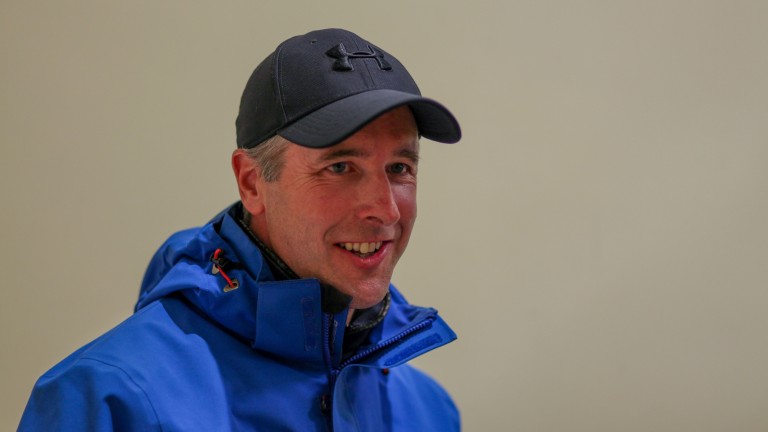 Richard Knight: "He was the only horse we really picked out in this sale"
Laura Green

"I like the fact that the mare was a useful two-year-old herself and he looks like he’ll be sharp and a great addition to the horses we’ve already bought. He shouldn’t take a huge amount of time. He’ll be trained in Britain and we’re looking forward to seeing him.”

Shadwell were also back in business and added the Siyouni filly out of Dancing Breeze to their Book 2 haul at a cost of 350,000gns. The filly was bred by Merry Fox Stud and offered by The Castlebridge Consignment.

The dam was Listed-placed during her own racing career and is a New Approach half-sister to the Group 3-winning Future Generation, who in turn bred the dual Group 2 winner Brundtland and Listed scorer Love Child.

Shadwell’s Book 2 spend reached 1,540,000gns and included eight new recruits, of which the Siyouni was the priciest.

Karl Burke knows better than most about the qualities leading first-season sire Havana Grey possesses, as the Middleham-based trainer prepared the strapping grey to win six races during his time on the track. Those victories include the Group 1 Flying Five Stakes at three and the Group 3 Molecomb Stakes at two.

And Burke renewed his association with Havana Grey when going to 325,000gns for the colt out of Dotted Swiss offered by Kilminfoyle House Stud. The dam is a winning daughter of Swiss Spirit who shares her page with Sweepstake and her high-achieving offspring Broome and Point Lonsdale.

“I’ve been underbidder a lot of times this week so it was nice to get one!” said Burke, who signed the docket alongside his daughter Kelly. “This fella is a strong colt with a good walk to him and he’s very like Havana [Grey], although he’s obviously a different colour. 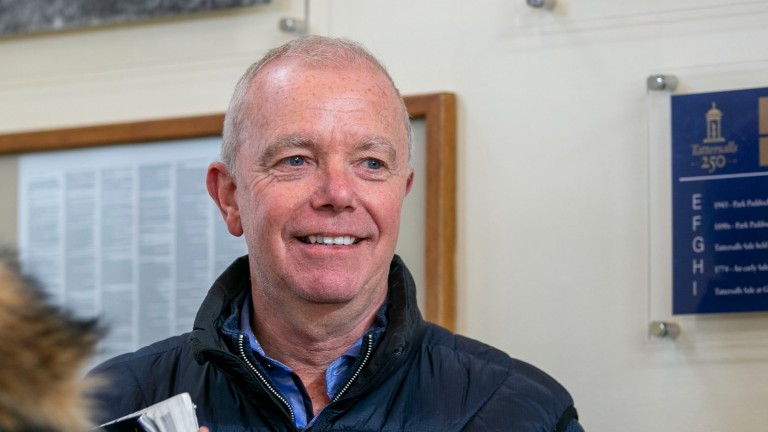 Karl Burke: "Havana Grey has had a great start to his career"
Laura Green

“Havana Grey has had a great start to his career. We’ve had only four or five cheapish fillies by him but a few of those have won. I knew early on they were just nursery horses but hopefully this colt will be a bit better than that. It’s been amazing to see what Havana Grey has done and not many first-season sires achieve what he has.”

The colt, the priciest of his sire’s offspring to change hands at public auction, was pinhooked by JC Bloodstock for just 56,000gns last November before Havana Grey had shown his hand at stud. The Whitsbury Manor resident has since sired 36 European winners and 13 black-type horses, headed by the Group 3 scorers Eddie’s Boy, Lady Hollywood and Rumstar. 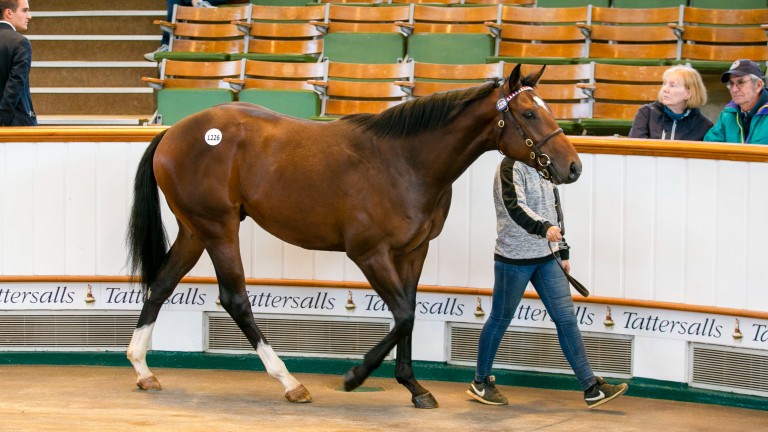 “I thought he was the best foal here on the Saturday of last year's Foal Sale," said Michael Fitzpatrick of Kilminfoyle House Stud. "It was just the physical that particularly drew me to him last year. It was a big price to give for him as a foal but it paid off.

“He looks sharp and looks like a real Royal Ascot two-year-old. Havana Grey has gone from strength to strength this season and I'd like to wish Karl Burke all the best with him – hopefully he can become the next Havana Grey!”

Fitzpatrick added: “I would also like to say a huge thanks to all my staff; the hours and work they put in, I couldn't do it without them. It’s only for them we’re able to do this." 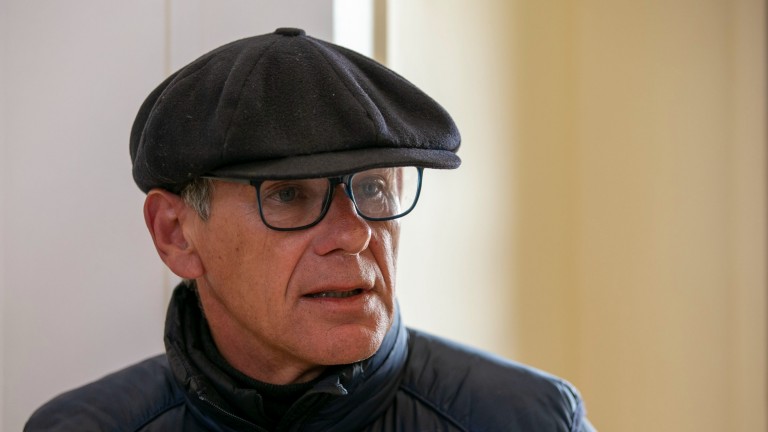 Charlie Gordon-Watson: a fan of No Nay Never
Laura Green

The 325,000gns mark had been hit earlier in the day when Charlie Gordon-Watson landed the No Nay Never colt out of Group 3 Park Express Stakes scorer Czabo offered by Baroda Stud.

“I’m a big fan of the sire and have also bought Lot 1155 [colt out of Conniption from Manister House Stud at 220,000gns] by him this morning,” said Gordon-Watson. “The first purchase is with Al Shaqab and they will make plans once we get through the autumn.”

Andrew Balding got among the buyers midway through the session when the Classic-winning trainer went to 300,000gns for the Sea The Stars colt out of Cava from Norelands Stud.

The March 1 foal is the first produce of the Group 3-placed daughter of Acclamation, whose pedigree traces back to champion siblings from the 1980s in Glint Of Gold and Diamond Shoal. 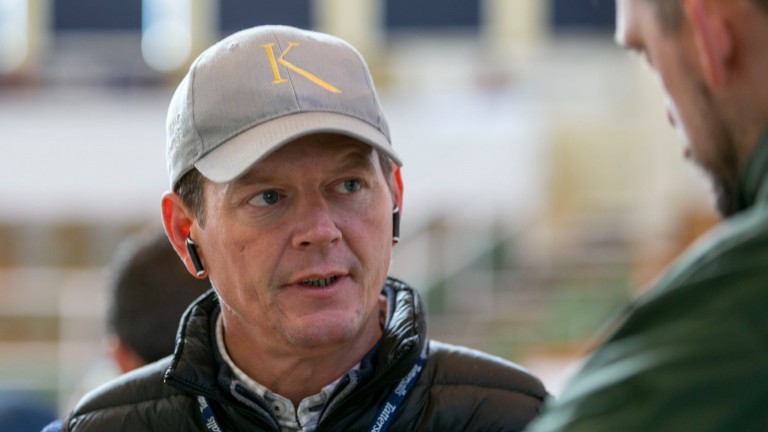 Andrew Balding: "It’s been tough to be able to afford the really good horses"
Laura Green

Cava is a Norelands homebred and a sibling to five winners, most notably her high-class brother Hitchens, winner of 11 races including three Group 3s.

“I bred the mare and we bought [granddam] Royal Fizz some years ago and she was a wonderful servant for us and bred lots of black-type horses,” said the stud’s Harry McCalmont.

“He’s going to Andrew Balding so I’m very happy with that. It’s so vital for an early foal to go to a good trainer. We had four Sea The Stars yearlings this year, we use him a lot, and I think he’s just about the best stallion around.”

“The word most commonly used to describe the trade we have experienced throughout this week has been ‘unrelenting’. There have been records established in pretty well every conceivable category. Turnover, average and median have all reached unprecedented levels, and yet again Book 2 of the Tattersalls October Yearling Sale has been the second-highest grossing yearling sale in Europe, second only to Book 1.

He added: “Following on from Book 1, buyers from America, Australia, Hong Kong, Japan and throughout the Gulf region have all continued to make significant contributions over the past three days.

"European buyers have also been conspicuous at all levels of the market while the domestic British and Irish demand continues to be the bedrock of Europe’s largest yearling sale, which annually showcases so many of the best commercial yearlings to be found and consistently produces top-class horses like this year’s outstanding unbeaten Derby winner Desert Crown.

“The support we receive from so many breeders and consignors from Britain, Ireland and further afield is the key to the enduring popularity of the October Yearling Sales at Tattersalls and is hugely appreciated.

"There is quality to be found at every level and next up is Book 3 of the October Yearling Sale, which has produced two of this year's top European two-year-olds; Lezoo, recent winner of the Group 1 Cheveley Park Stakes, and Crypto Force, the impressive winner of the Group 2 Beresford Stakes."

Sea The Stars colt steals the show at 700,000gns as intensity ramps up at Book 2

'More successful than we could have ever imagined!' - all-female pinhooking syndicate off to a flyer with 150,000gns Havana Grey colt

FIRST PUBLISHED 9:04PM, OCT 12 2022
With the calibre of mares New Bay is covering now, he has the opportunity at least to step to a higher level again