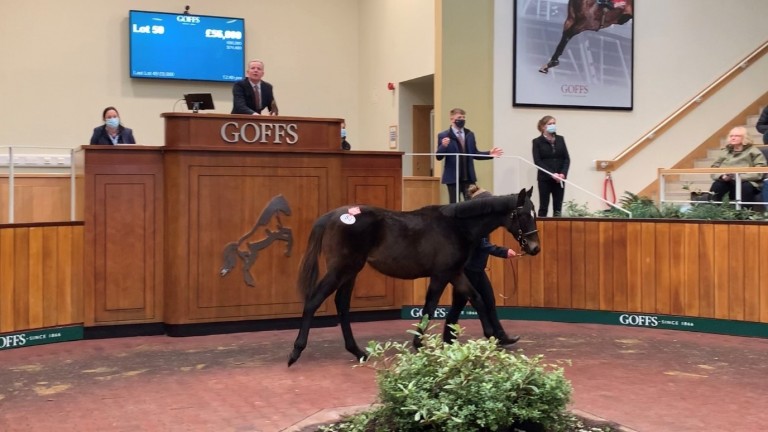 The opening day of the Goffs UK January Sale saw the sole filly foal in the catalogue by Haras de Montaigu's No Risk At All make a resounding and sale-topping £56,000 to Cathal Mariga of Coolmara Stables.

Consigned by Molland Ridge Stud on behalf of Yeo Barton Bloodstock, the filly is out of the winning Kalanisi mare Only For Love, who has an unraced four-year-old Blue Bresil filly called Trudie Glen and a three-year-old filly by Coastal Path.

Mariga said: "She's a very nice filly. She walks, has size and a nice pedigree, while the sire is one of the hottest around, so she ticked all the boxes really.

"We haven't decided whether to race and breed from her or sell her as a store."

A pleasure to consign TOP LOT @GoffsUK for @barton_yeo. We wish @CoolmaraS the best of luck with their new purchase: Lot 50 a super filly by No Risk At All. #MollandRidgeStud #GreatBritishBonus pic.twitter.com/JahcofJHyo

Lexi the choice of Lennon

Lexi's Choice topped the broodmare section when selling to Kieran Lennon of Springhill Stud for £52,000. The well-bred daughter of Presenting placed twice over hurdles for Tom Symonds, including when third to the high-class The Glancing Queen in a novice event at Bangor last January.

The six-year-old was offered by Cobhall Court Stud and is a half-sister to Grade 3-winning chaser The Game Changer and Paddy Power Gold Cup scorer Johns Spirit; that pair both placed in Grade 1s over fences. The trio are out of a full-sister to Newbury Grade 2 bumper winner Crocodiles Rock in the unraced Heron Island mare Gilt Ridden.

Lexi's Choice is set to retire and visit a leading Irish stallion for her first covering, Lennon revealed.

He said: "I bought her for a friend of mine in County Wexford and she'll come to my place. She liked the pedigree and I then okayed the mare and took her instructions. She's a Presenting mare with great action and a good outlook."

The Jack Hobbs filly out of Queen Of The Stage had received a most welcome and timely catalogue update, with her Blue Bresil half-brother Constitution Hill building on his impressive hurdles debut victory with an equally barnstorming success in the Grade 1 Tolworth Novices' Hurdle this month.

Competition for this valuable filly was therefore at a premium, and it was Dan Skelton who ultimately came out on top for Alne Park Stud, the trainer warmed from showing Dink off at the TBA National Hunt Stallion Parade on a bitterly cold January morning.

The June-born filly was consigned by Throckmorton Court Stud and is the second foal out of Queen Of The Stage, a Listed-placed hurdler for Nick Williams. The daughter of King's Theatre also has a four-year-old gelding by Flemensfirth and a three-year-old Jack Hobbs filly to continue the page updates in future.

With the Nicky Henderson-trained Constitution Hill ante-post favourite for the Supreme Novices' Hurdle at the Cheltenham Festival, there could well be more to come for his well-related half-sister's page.

On what led him to part with £50,000 for the filly, Skelton said: "Constitution Hill looks very good and in a couple of months' time she could be a sister to a Supreme Novices' winner. He's got as good a chance as any and going forward he's a big, scopey horse.

"If she matures into a real nice racehorse then we'll race her and ultimately breed from her.

"We're trying to do the best we can to strengthen the stud. I'll run the racehorses and Grace [Skelton] will run the stud. It works out quite well."

On whether the team would add to their stallion population at Alne Park Stud, Skelton replied: "The horse who was second favourite for the Triumph [In This World] picked up a small injury, but hopefully one day he could be good enough to stand.

"If something came along then we would, although we're trying to be quite picky. The most expensive ones to collect are the stallions, so we've got to make sure what we end up with is desirable."

Relation to Jezki an early highlight

Swanbridge Bloodstock's Liz Lucas swooped to pick up Overbury Stud's Getaway filly out of a full-sister to 2014 Champion Hurdle winner Jezki, going to £43,000 to see off challengers.

The March-born chestnut caught the eye early on in the opening session with her athletic walk and calm demeanour, while her top-class pedigree speaks for itself. 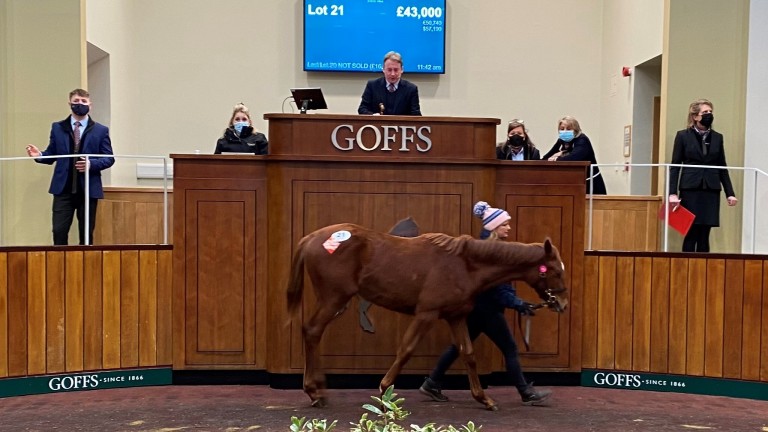 She is the third foal out of the winning Jelan, a Milan sister to eight-time Grade 1 winner Jezki, as well as a half-sibling to the likes of Champion Novice Hurdle victor Jered, World Series Hurdle hero Jetson and Devenish Chase winner Jett.

Lucas said: "I thought it was a lovely pedigree and they don't come on the market very often. She will be kept to run and hopefully join the broodmare band if she's halfway decent. She's a good walker and we thought she'd make more money than that."

The first foal out of Atlanta Ablaze, a multiple Listed-winning chaser for Henry Daly, sold to Matt Coleman for £32,000. By the in-demand Jack Hobbs, Mill House Stud's April-born colt has a page full of black type as his second dam was a Listed winner over hurdles in France while under the third dam is Sun Storm, winner of the Grade 2 Prix Congress and Grade 3 Prix Orcada.

The sale concludes on Wednesday from 10am, with horses in training and point-to-pointers on offer.

FIRST PUBLISHED 7:06PM, JAN 25 2022
We're trying to do the best we can to strengthen the stud. I'll run the racehorses and Grace [Skelton] will run the stud so it works out quite well