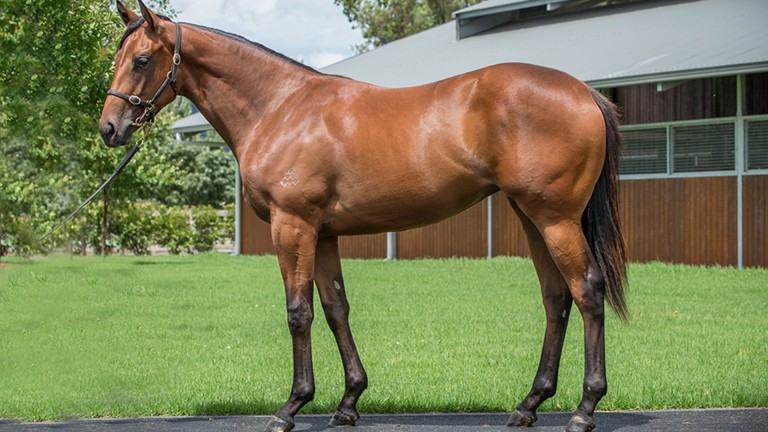 The filly, whose sibling True Moonlight won at Doomben in October for Gold Coast trainer Gillian Heinrich, was bought by All Winners Thoroughbreds. Agent Denys Chan, who had purchased the half-sister to Hong Kong champion Golden Sixty by Capitalist in Book 1, signed for the filly.

The yearling is the sixth live foal out of the stakes-placed Moonlight Hussey who is a sister to the Group 2 winner Colorado Claire, herself the dam of Todman Stakes winner Gunnison.

Arrowfield Stud’s Paul Messara said: “She was a lovely filly by Scissor Kick. She's well related and is from a great family, the family of Gunnison, and Colorado Claire, who we sold one of her progeny by Snitzel earlier in the sale [for $425,000].

“She was a fantastic type and those good sorts are well found.”

“I think the good ones really stand out in Book 2, which can cause a lot of buyers to come together and there is plenty of competitive tension when they are all on the one horse, that's for sure,” Messara said.

All Too Hard colts find favour with buyers

Later, Brisbane trainer Chris Anderson landed his fifth purchase of the sale with the addition of a colt by All Too Hard for $170,000 after receiving a strong recommendation from agent Duncan Ramage.

Another son of Vinery Stud’s All Too Hard, who is out of the dual European stakes-placed mare Poppet’s Treasure, was also sold for $200,000 inside the last hour to Queensland trainer Kacy Fogden.

Anderson, meanwhile, said Ramage was adamant the Cressfield-consigned colt, catalogued as Lot 1018, was a horse that had to end up at his Eagle Farm stables.

“Duncan identified this horse on the farm some time ago and it was one he actually said to me, ‘we can’t afford to go home without him’ and we had a little bit more up our sleeve had we had to go harder,” Anderson said.

“He loved the type of horse that he was and the stallion can throw a very, very good horse as well. I am very happy to take him home.”

The colt is the sixth living foal out of multiple winner Nikkirina who has produced four winners from as many foals to race.

“Looking at his pedigree so far in terms of who the mare has been to, this is probably her best chance [of success] now, I would have to say, so hopefully that proves to be correct,” he said.

Reflecting on what had taken place so far at this week’s record sale, Anderson said:

“It has been unbelievably tough. I have taken five home now but I reckon I have been under bidder on seven, so we have had a real go. I am certainly pleased with what we’ve got, but it has been very, very strong.”

FIRST PUBLISHED 12:59PM, JAN 17 2021
She was a fantastic type and those good sorts are well found