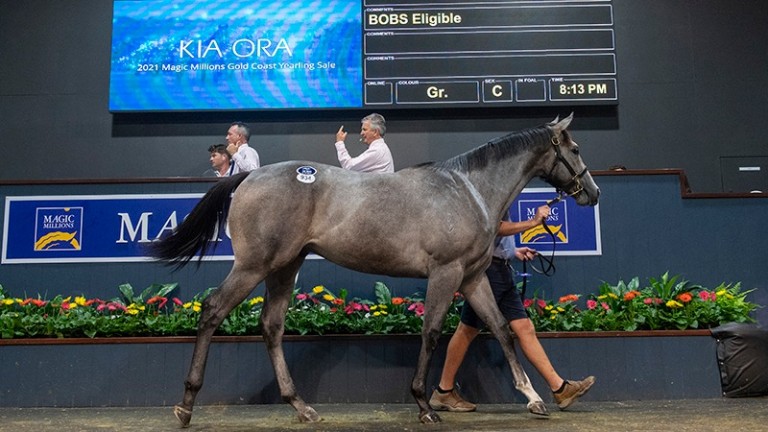 The I Am Invincible session-topping colt at Magic Millions
Magic Millions
1 of 1
By Tim Rowe of ANZ Bloodstock News 3:25PM, JAN 16 2021

Magic Millions officials were toasting the setting of a new benchmark set of figures for its major auction of the year, the Gold Coast Yearling Sale, after a A$1 million (£567,000/€638,000) I Am Invincible colt brought to an end a massive five-session Book 1 offering.

The company had gambled in November by compiling a bigger catalogue this year and while conventional wisdom suggests that the average and median should go down as a result of the increased numbers, that was not the case.

As the Book 1 aggregate closes in on the A$200m mark - it was at $197,240,000 late on Saturday night - at an average of $253,000 with 761 horses sold, Magic Millions’ managing director Barry Bowditch was emotional when he reflected on the events which had unfolded over the previous five days.

He said: "It’s overwhelming. It's special what we’ve achieved. To work as we’ve done in the last six months to put this catalogue together, and then to have the restrictions and the roadblocks put in place over the last month, has put this team under immense pressure.

“To pull this off to the level we have is something we didn't expect. It was very special. This has been crazy, so to do it and to almost gross A$200 million, we aimed to do that for Book 1 and Book 2, and to get there in Book 1 is amazing.”

Bowditch praised the vendors who had backed Magic Millions to deliver a competitive January sale when many were questioning whether the demand would be there this year, given the coronavirus pandemic has been causing havoc for nearly 12 months.

He said: “The vendors have sent their very best yearlings that are ready for this sale. The buyers have recognised how we've selected the catalogue.

“We’ve had quality horses from Lot 1 to Lot 962. These buyers have got a lot to race for, prize-money is great, the race series is a fantastic fillip. They really got behind these horses and it really boosted the prices.

“This was the injection to the industry to give the confidence that the market is in a great place. I'm proud that we have been able to provide a benchmark for the rest of the yearling sales series.”

Neasham jumps over hoops to ensure she lands her Vinnie colt

Warwick Farm-based Neasham did not expect to be able to attend the Magic Millions sale in person, so performed a significant amount of legwork in on-farm inspections, but she and a few other Sydney-based buyers were granted government exemptions to be on the Gold Coast with strict protocols in place.

“I saw him twice on the farm at Kia Ora and I loved him the first time and when I went back for my second look, I loved him even more,” said Neasham.

“Look, I didn’t think I was going to get up here [to the Gold Coast], so I had worked pretty hard on trying to get a couple of people together to try and secure him, so it is a bonus to get up here and when I saw him again I loved him even more.

“It has been a long week waiting for him to come through on the final night, so I am delighted to get him, especially being from a great farm in Kia Ora.

“[Kia Ora’s] Ananda Krishnan has a couple of horses with me and has really supported me, so it is great to get a really exciting colt and hopefully we can come back here next year with him.”

Catalogued as Lot 934 and the second seven-figure lot sold by Kia Ora Stud this week, the colt is the fourth foal for Villa Verde, a three-quarter sister to this season's Group 2-winning three-year-old Doubtland and Listed winner Pretty Fast. 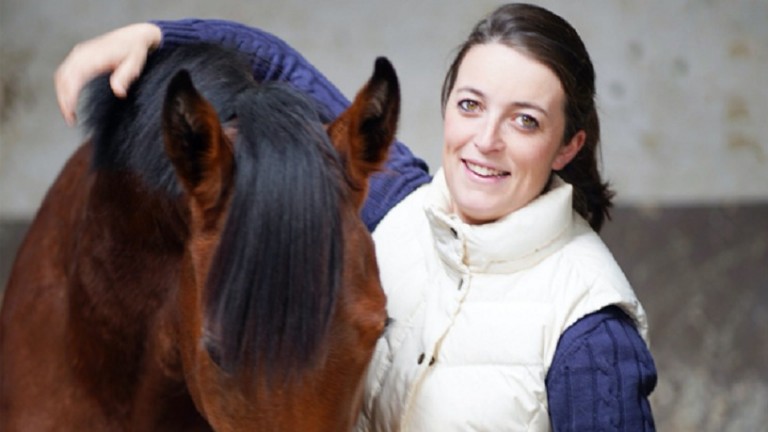 Annabel Neasham: 'It is great to get a really exciting colt'

Kia Ora Stud’s Shane Wright said: “This colt was top-class, we loved him from the day he came in and he has just been perfect ever since. He's really gone down well at the sales. He's behaved himself immaculately, and the very best to Annabel and the team going forward.

“Annabel has started off amazingly, and it’s only going to continue if she buys quality like that.”

Neasham has become the primary trainer for Tony Fung and Phoenix Thoroughbreds, the leading buyer at the sale by aggregate with 19 lots for a total spend of $11,645,000.

Among the Fung-Phoenix haul was the last yearling by Redoute’s Choice to be offered through a Magic Millions’ January auction.

The Baramul Stud-consigned colt, who was catalogued as Lot 880 and made $370,000, was perhaps fittingly sold by Gerry Harvey, who has bred 12 of the late champion stallion’s 177 stakes winners, headed by Group 1 winners Lotteria and Royal Descent.

Neasham said the support she had received since leaving Ciaron Maher and David Eustace to go out on her own was “pretty surreal”.

“This is the first sale that I have been at as a trainer in my own right and to be given that support, I am just so grateful to the Fung family and to Phoenix as well, and I can’t wait to get some of those nice big colts into the stable,” said Neasham who has bought ten horses under her own name in Book 1.

Reflecting on any added pressure she may now be under having completed a host of big purchases, Neasham said: “There’s a little bit, but we can try and cope with that. We’ve got a good team, we’ve started off well, so we will try to continue that.”

Maher and Eustace, meanwhile, were also a significant part of the buying bench in Book 1, spending A$11.27m on 37 yearlings.

The leading first-season sire by aggregate was Yarraman Park Stud’s Group 1-winning sprinter Hellbent, and by average was Cambridge Stud shuttler Almanzor, who had three yearlings sell for an average price of $506,667.

Magic Millions will conduct a two-day Book 2 sale starting at 2pm on Sunday before the final day begins at 10am on Monday.

FIRST PUBLISHED 3:25PM, JAN 16 2021
To pull this off to the level we have is something we didn't expect. It was very special