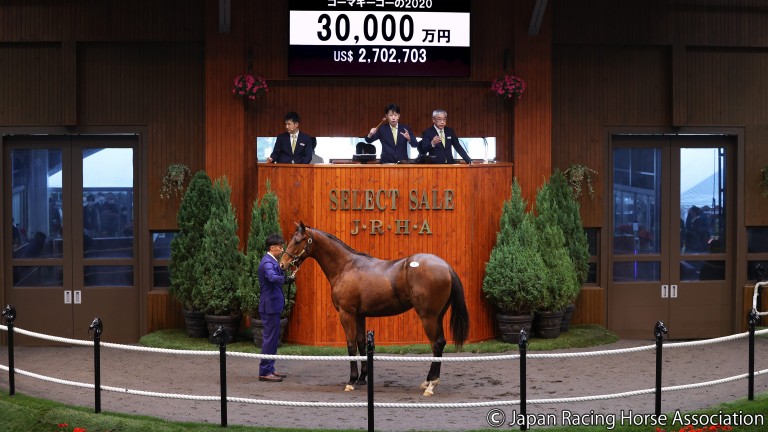 It was the end of an era at a record-busting JRHA Select Sale on Monday when four of Deep Impact's last-crop yearlings went under the hammer.

The January-born colt, who actually sold for less than some observers were predicting, is the second foal out of the Gulfstream Park Oaks winner, a daughter of Ghostzapper who also won the Black-Eyed Susan Stakes and finished fourth behind Cathryn Sophia in the 2016 Kentucky Oaks.

Hiroyasu Takeuchi, bloodstock adviser to Yuji Hasegawa, said: “We inspected all four yearlings by Deep Impact and we were convinced this was the best one.

“He's a gorgeous individual and good walker and I like his pedigree, because he has Deputy Minister and Storm Cat, both of which work very well with Deep Impact.

“Market watchers were saying beforehand he would cost at least 500 million yen and we thought he is worth it. I'm very happy to acquire him for 300 million yen.”

Go Maggie Go was bought by Katsumi Yoshida for $750,000 at the Fasig-Tipton November Sale in 2016 and has produced the two-year-old Heart's Cry filly Logi Maggie Go, who was placed on her only start to date in Japan.

Two of the other three yearlings by the late supersire sold, including a colt out of multiple Grade 1 winner Sweep Tosho. The Northern Farm-consigned lot sold to Ikeda Toyoharu for ¥200m, while Oiwake Farm's filly out of Beverly D Stakes victress Watsdachances made ¥120m to Hirosaki Toshihiro.

The colt is the second foal out of Finest City, a three-time Graded winning daughter of City Zip who was purchased by Yoshida for $1.5 million at the 2017 Fasig-Tipton November Sale.

The turnover, average, median and clearance rate were all new records at the yearling session of the JRHA Select Sale.

Yoshida, the leading consignor at Monday's session, said: “From the beginning of the sale at 10am to the conclusion at 7:30pm the market was very strong all way through.

"I would like to thank all consignors for offering yearlings with the highest quality. I'm very impressed to see 16 different stallions being represented by a yearling selling for more than 100 million yen.

"While we lost two big names, Deep Impact and King Kamehameha, two years ago, we have the depth of excellent stallions now and I'm glad to see so many new players active at today’s market."

The sale concludes with the foal section at Northern Horse Park on Tuesday.

Who possesses the sire power to succeed the great Galileo? (£)

FIRST PUBLISHED 2:19PM, JUL 12 2021
We inspected all four yearlings by Deep Impact and we were convinced this was the best one