Lack of Shadwell support no barrier to strong trade at Tattersalls 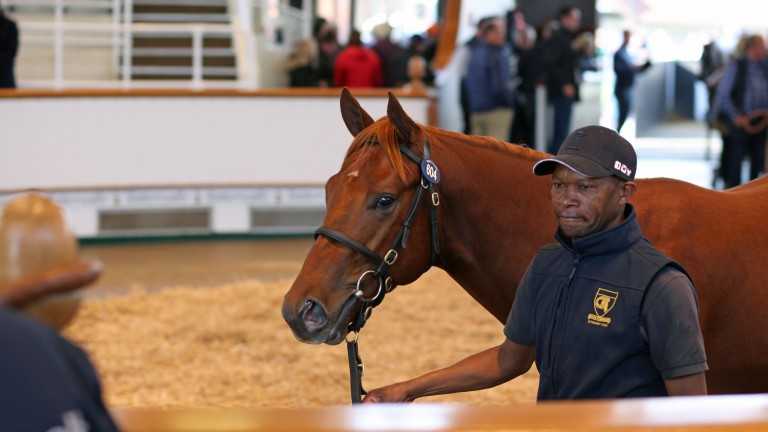 Twelve months ago Shadwell contributed 11 per cent of aggregate receipts at Book 2 of the Tattersalls October Yearling Sale, with a spend of 5,327,000gns accounting for 36 lots. With the operation widely anticipated to be notable by their absence only in Newmarket this week, anxiety was, understandably, in plentiful supply among vendors.

There was indeed no sign of activity from Shadwell during the opening session of this year's Book 2 on Monday, but there was a bold show of market resilience that produced some quite remarkable year-on-year increases in all the key indices.

The increases were even more pronounced among the average and median figures, with the former up 27 per cent to 89,318gns and the latter up fully 35 per cent to 70,000gns as the top ten lots went the way of nine different individual buyers.

The sales ground was busy throughout the day and a drove of prospective purchasers duly followed Rathbarry Stud's Night Of Thunder colt into the Park Paddocks ring. After a helter-skelter three-way struggle the gavel came down in favour of Dwayne Woods at 375,000gns.

"He's stunning and, for me, he's the best colt in the sale," said Woods after he had seen off the challenges of Anthony Stroud and the Ross Doyle - Richard Hannon axis, who stood with Amo Racing's Kia Joorabchian. 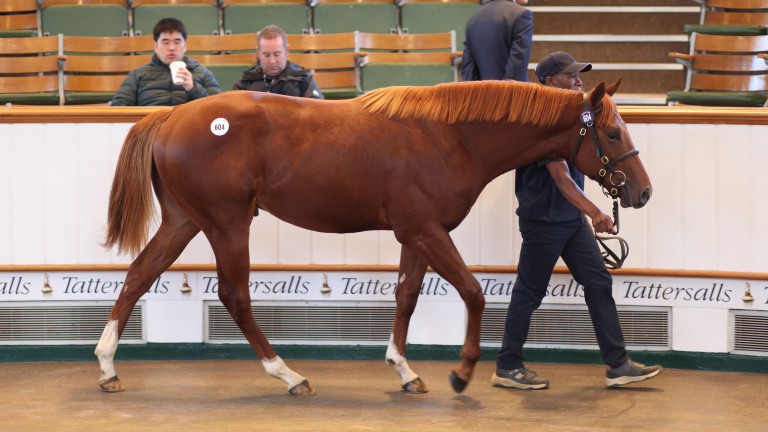 "He's very strong and probably the cleanest Night Of Thunder I've ever seen; he's got the conformation, the strength, he's very mature, he has it all. He's from a wonderful farm, although it wouldn't put me off if he'd come from Alaska when he looks like he does!"

Woods was joined by his brother, the Newmarket trainer Sean Woods, who added: "He'll have a bit of time off now, then be broken in, and we'll have a look at him in January before he comes to us at Shalfleet Stables. He's been bought for an existing owner." 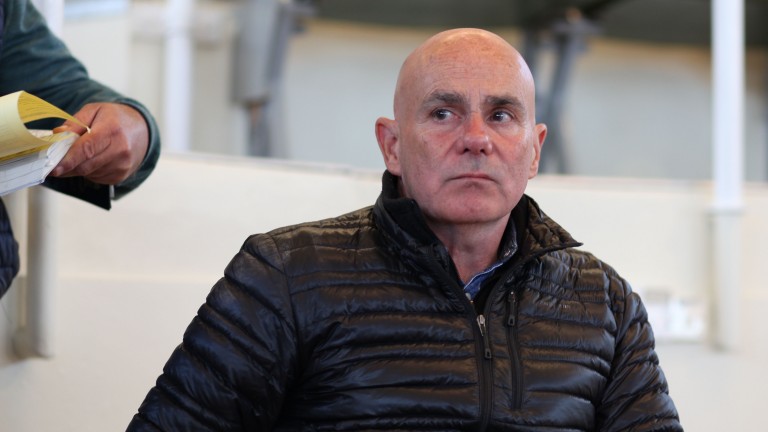 Dwayne Woods: "He's stunning and, for me, he's the best colt in the sale"
Laura Green

The colt is out of a Pivotal half-sister to high-class sprinters Blaine and Bogart, while another sibling, Rocana, is the dam of this year's Chester Vase winner Youth Spirit. The page improved further when the colt's sister, the Shadwell-owned Hanaady, made her second outing a successful one late last month.

The imposing youngster had been due to appear at last year's December Foal Sale but, when he was withdrawn, Rathbarry's Frannie Woods was able to track him down at Genesis Green Stud.

Although the private deal that was struck means there are no previous sales records for the colt, Monday's six-figure transaction undoubtedly generated a handsome profit for connections.

"He's a lovely colt and a horse with a great mind," said the consignor. "He's been a pleasure to do anything with, although I wasn't necessarily expecting him to make that price. The sister won for Ed Dunlop just a few days ago and that helped bring everything together, so I've had a bit of luck too."

The session's second-top lot came late in the piece when BBA Ireland and Yulong Investments struck an online bid of 320,000gns to land the Galileo filly out of Cornwallis Stakes winner Mrs Danvers.

Bred by the Mrs Danvers syndicate and offered through Manister House Stud, the filly was the only lot by Galileo on offer in Book 2.

The dam, a daughter of Hellvelyn, proved a genuine rags-to-riches star on the track having been bought back by her vendor at just £1,000 as a yearling before she went on to land five races and £196,235 in prize-money.

Mrs Danvers has visited Galileo each year since she retired from racing, and produced her third foal, a colt by the 12-times champion sire, on May 3 this year.

Lively trade continued deep into the evening, most notably when Richard Brown and John Gosden went to 300,000gns for the Kingman half-sister to Tomorrow's Dream offered by Apple Tree Stud.

"She's an extremely attractive filly and she's come from a very good young farm in Gloucestershire," said Brown. "I've seen her quite a lot and she put up a fantastic show.

"We were absolutely lights out to get her but John thought she was the outstanding Kingman filly in the catalogue, and he probably knows more about Kingman than me! She's a lovely elegant filly by a proper stallion with a proper page." 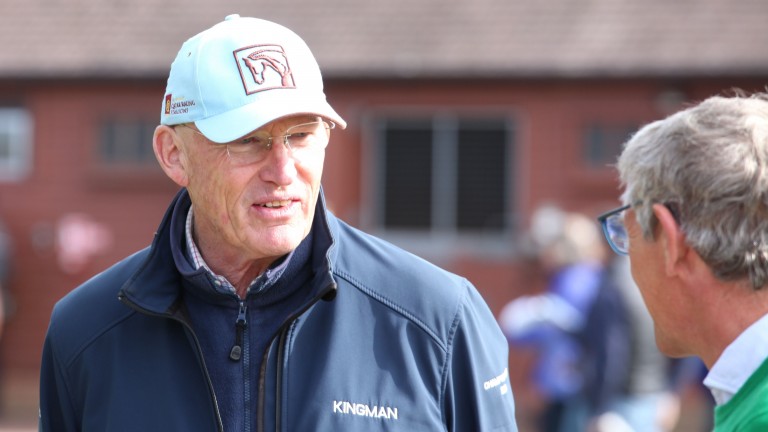 The filly is out of Midnight Thoughts, an unraced daughter of Henrythenavigator and Moyglare Stud's Ribblesdale Stakes heroine Irresistible Jewel, who in turn bred Irish St Leger winner Royal Diamond, Ribblesdale Stakes scorer Princess Highway and the Group 3-winning Mad About You.

Brown reflected on a strong opening session by saying: "I think the market has been very good today and it certainly feels very strong. It was a frustrating morning as I bid on a lot of horses before lunchtime and it wasn't going very well. But this filly was top of the list so I'm delighted to have turned it around."

The Hong Kong Jockey Club recruited five yearlings at a cost of 1,570,000gns during Book 1 last week, and the organisation's chief talent scout Mick Kinane was back in action on Monday when going to 300,000gns for the Kingman colt out of Hunaina offered by Ballyhimikin Stud.

The colt, who was bred in partnership between James Hanly, Anthony Stroud and Trevor Stewart, is the first foal out of the Group 3-winning daughter of Tamayuz, whose page also features the triple Group 1 hero Hurricane Lane and dual Derby scorer Harzand. 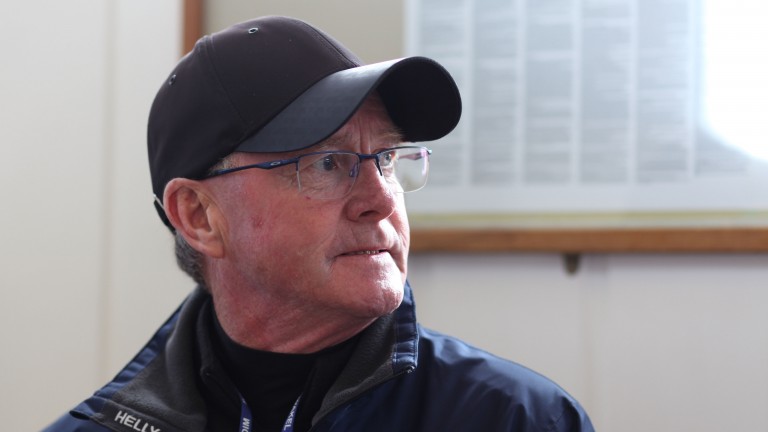 "He's by a great stallion and he's a lovely, correct model," said Kinane. "That's the first one I've tried on today but good horses are always hard to buy. I bought five last week but there were less million-dollar babies than last year so perhaps there's been a bit of a reality check [at the top of the market]."

No Nay for Balding

Andrew Balding knows a good No Nay Never when he sees one, having trained the sire's best daughter Alcohol Free to win a hat-trick of Group 1 prizes, namely the Cheveley Park, Coronation and Sussex Stakes, and the Group 2 Criterium de Maisons-Laffitte scorer Shadn.

The master of Kingsclere now has an exciting son of the upwardly mobile Coolmore stallion to look forward to after securing the colt out of Fleeting Fancy from Newsells Park Stud at 260,000gns. The dam, a daughter of Galileo, is a sister to the stakes-placed pair Persia and Visage, while the page traces back to dual champion sire Caerleon. 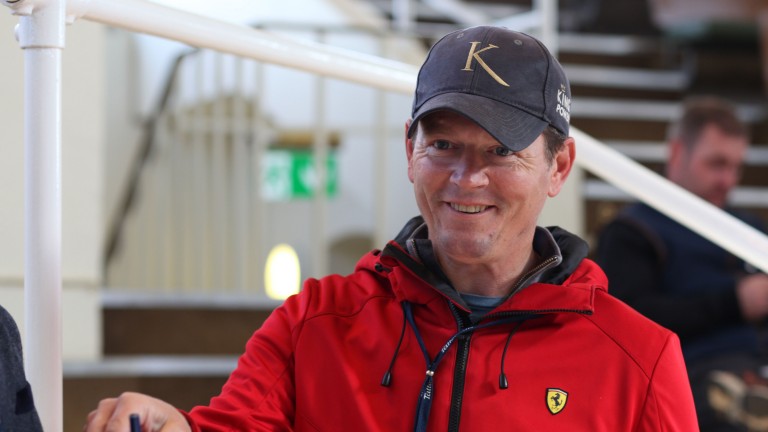 Andrew Balding: "We've had some success with No Nay Never"
Laura Green

"He's a lovely colt and obviously we've had some success with the stallion so I'm thrilled to get him," said Balding, who has been aided on his hunt for future talent by his mother, Emma, and racing manager Tessa Hetherington.

"He passed all of our various lookers and he was one of our top picks of the ones we've seen selling at this sale. He's for an existing client in the yard."

Balding also had a positive report on Alcohol Free, who is due to contest the Queen Elizabeth II Stakes on British Champions Day, saying: "She's in good form and it's all systems go for Saturday."

Ballyhimikin Stud enjoyed another fine result when Noel Wilson went to 250,000gns for the Lope De Vega colt out of the Listed-winning Kambura, and the Kent-based owner revealed he has some ambitious international plans in place for his new acquisition.

"He's going to Australia to be trained by Annabel Neasham, if she'll have him!" said Wilson. "He's very classy and vetted superbly, and for me he was the standout of the sale."

Wilson's purchase joins a diverse portfolio of horses spread across France and Australia, and he explained that the paucity of prize-money on offer in Britain meant that investing in the domestic racing product was not a financially viable proposition. 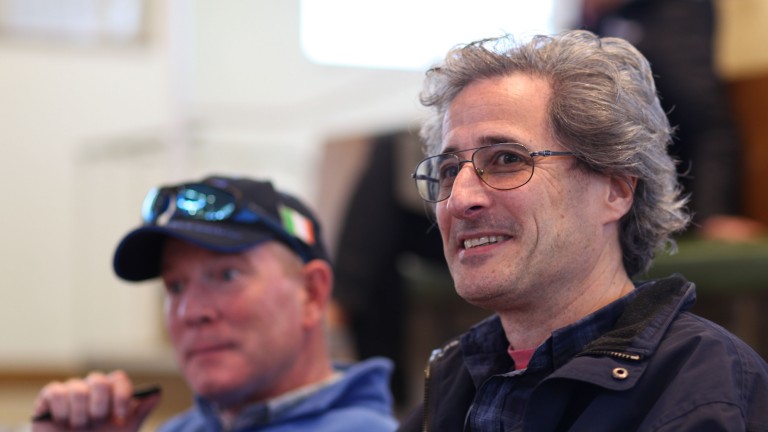 "I've got horses in France, they’re generally under Justwow Limited, which is my company, they're with Eoghan O'Neill and Francis-Henri Graffard, and I've got bits and bobs with Christophe Ferland," he said.

"I've got some 20 per cent shares in horses in Australia to help me get my head around racing there. I live in Kent but I'd never have horses in Britain for the obvious reason; it's just a joke here, whereas I've had horses in Australia come tenth and pick up £1,500. I'm not really rich enough to support British racing."

Wilson's main business interests are in property, although he explained he had also worked on the racing desk of a tabloid newspaper in his younger days. He quipped: "It was a great day when I exited journalism!"

Merry on the mark

With four white socks, a broad white blaze and a flaxen mane, the Starspangledbanner filly out of Greenisland was hard to miss, and the youngster clearly caught Hugo Merry's attention as the agent signed the ticket for the Watership Down Stud-consigned youngster at 220,000gns.

The dam, a Listed-placed daughter of Fasliyev, has already produced four winners, including the Listed scorers Boerhan and Shamshon, while the dam's half-sister, Cheveley Park Stakes winner Missile, has advertised how well Starspangledbanner clicks with this family. 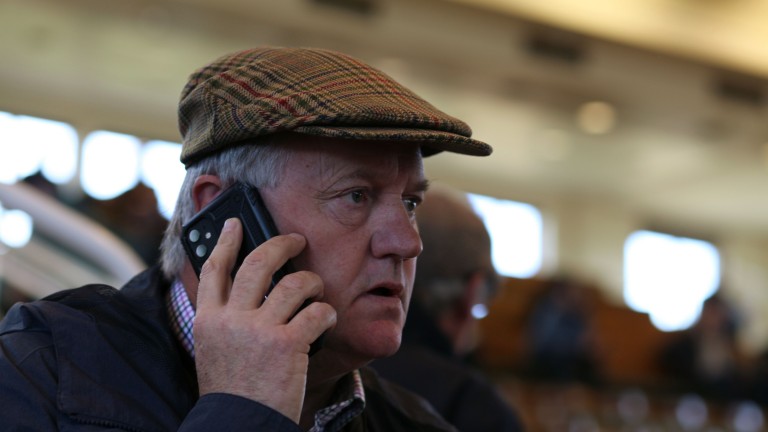 "I bought her for Andrew Rosen to partner up with the Lloyd Webbers," said Merry. "He's a long-standing client and friend of Watership Down so we'd seen this filly around, and she was bred by the Jennings, who have bred a lot of good horses.

"We were trying to find a filly who could work out on the track and whose pedigree means she has proper residual value to go back to the form to be bred from. She's a lovely shape, she looks like a real runner, and the sire has another great year. We'd have liked to have got her for a little less but sadly it wasn't to be."

Book 2 of the Tattersalls October Yearling Sale continues on Tuesday at 10am.