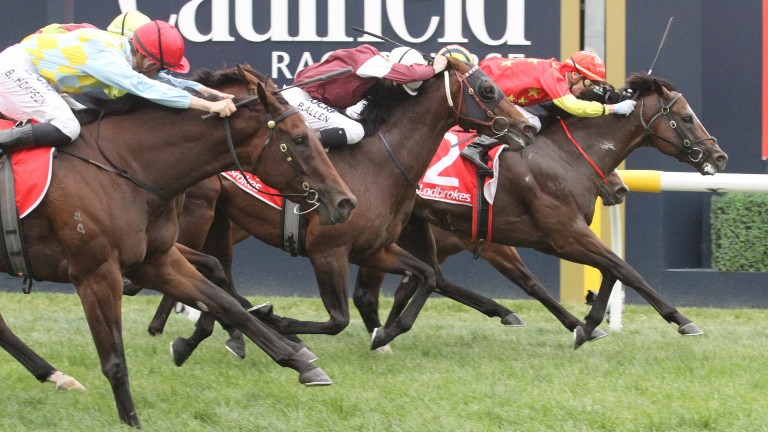 Russian Revolution in winning action on the track; the first-season sire was responsible for the session-topper on Thursday
Sportpix
1 of 1
By Tim Rowe of ANZ Bloodstock News 1:39PM, FEB 18 2021

Western Australian owners and trainers have taken advantage of a decimated interstate buying bench to dominate their local Magic Millions Perth Yearling Sale, in which a son of first-season sire Russian Revolution was the scene stealer after selling for A$325,000 (£181,000/€209,000 early in the session.

The highest-priced yearling to sell at the Perth sale since 2017, it was Ascot trainer Simon Miller who was forced to pull out all the stops, warding off Sydney-based agent Andrew Williams and Upper Bloodstock, to ensure he bought the powerful colt, one of five yearlings sold on Thursday for A$200,000 or more.

While the Book 1 sale did not follow the trend of the Magic Millions Gold Coast auction or the Inglis Classic sale, which saw significant year-on-year growth, the competition for quality lots was evident throughout the day, which lasted right to the end of the 163-lot afternoon session.

The top-priced colt, by Newgate Farm’s dual Group 1-winning freshman sire Russian Revolution, was bred by the Western Breeders Alliance and foaled at Darling View Thoroughbreds, making him eligible for the lucrative Westspeed bonus scheme, a major factor in the state’s owners seeking their local product so strongly.

“The Deep Field half-brother [Winner Method] in Hong Kong is clearly above average. The mare’s doing a good job, he is a good type and even though he is a late foal (November 8), he still looks imposing, so I was happy to have a crack at him.

“But I didn’t have any bullets left - that was about me. Now, I’ll be trying to jam black type on him, in any direction, and keep him as a colt.”

The colt is the seventh living foal out of four-time winner Magical Belle, making him a half-brother to four winners including WA stakes winner Enchanted Dream, the stakes-placed Mystic Maid and recent impressive Hong Kong scorer Winner Method. He was catalogued as Lot 21.

Darling View Thoroughbreds’ Brent Atwell, meanwhile, has held the session-topping Russian Revolution colt in high regard from the time he was born, but he admitted the price tag surpassed his lofty expectations.

“I thought he was the star of the show and I always thought he’d make good money as he’s always been a lovely colt,” Atwell said.

“The fact that he can go to a really good trainer in Simon and stay in Perth is great. He’s got the Westspeed bonuses, which is great for Simon and his clients, and we look forward to watching him race here.”

Atwell also praised Brian Nutt of Attunga Stud at Scone for his assistance with the Western Breeders’ Alliance mares and foals when they are sent to the Hunter Valley to be covered.

He said: “Our mares over the east reside at Attunga, but she came home to foal. They are always a big part of what we do over there. We love breeding to Newgate stallions. They are quality horses, so we are very happy.”

Western Breeders Alliance sold 17 yearlings on Thursday at an average of A$89,765. The draft also included a A$220,000 Choisir colt and a A$170,000 Zoustar colt, both bought by trainer Neville Parnham, who also prepares stakes-winning sprinter Indian Pacific by the Widden Stud-based Zoustar.

The average of A$71,374 and the median of A$55,000 was on par with the 2020 sale but the clearance rate of 79 per cent was up on the same day last year, a figure that pleased Magic Millions managing director Barry Bowditch.

“I think it’s been a really healthy day’s trade for Western Australia in a market where we have obviously had fewer interstate buyers this year given the border restrictions,” said Bowditch.

“The locals on a whole have got in and participated, and rightly so given the huge bonuses these horses race for, whether it be the Magic Millions race series at Pinjarra or Westspeed.”

One factor that was clear, Bowditch said, was that vendors who had invested in quality mares had been rewarded in the sales ring by the buyers.

“For Brent Atwell and the Western Breeders Alliance to get a result topping the sale today, it is well deserved as they have been investing heavily for the past few years, be it in sires here in the west or mares in the east,” he said. “It was a fantastic result for them.”

Day two starts at 11am local time on Friday.