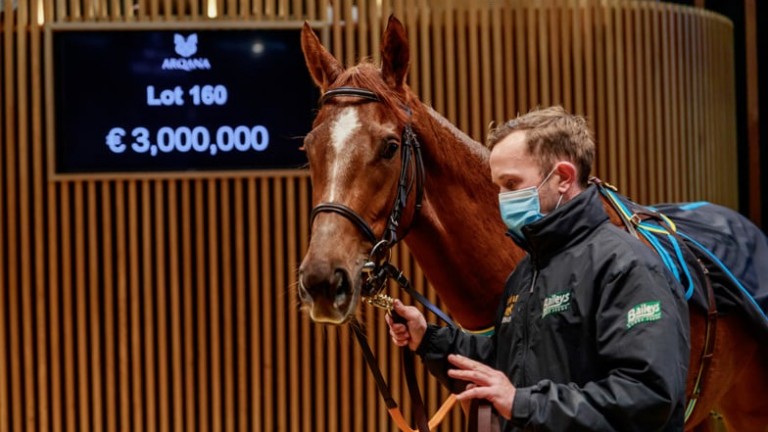 After a cacophony of seven-figure bids brought the curtain up on the Arqana Breeding Stock Sale on Saturday, trade mellowed throughout the following three sessions until ending on a rather more low-key note on Tuesday.

The concluding day was topped by the La Riviere-consigned Hurrym, a winning Hurricane Run half-sister to smart jumper Early Doors and the Listed-winning Flat performer Landym. The four-year-old, who was offered in foal to Rio De La Plata, drew a winning bid of €28,000 from George Mullins.

The four-day sale generated an unprecedented level of turnover, with aggregate sales reaching a record €41,556,000. This figure is not only a 65 per cent year-on-year gain, but is also up 21 per cent when compared against the pre-Covid renewal in 2019.

The lion's share of turnover came from the remarkable session on Saturday night, when five seven-figure lots changed hands and spending reached €32.203 million, 77 per cent of whole-sale turnover.

Topping the list of prices was Prix de l'Opera heroine Rougir, who became the most expensive breeding prospect sold in Europe this year when knocked down to Oceanic Bloodstock, acting on behalf of Peter Brant and MV Magnier, at €3m. The Group 1 winner also holds the distinction of being the most expensive lot ever sold at Arqana.

She was closely followed by Prix Jean Romanet winner Grand Glory, bought by Yohea Bloodstock for €2.5m, and Waldgeist's sister Wildfeder, who was signed for by Crispin de Moubray as Gestut Ammerland bought out partners Newsells Park Stud at €2.05m.

First-time vendor Sumbe, the umbrella under which Nurlan Bizakov's Hesmonds Stud, Montfort & Preaux and Haras du Mezeray operate, topped the consignors' charts with six sold for €5.352m, 13 per cent of turnover. The sextet included the aforementioned Rougir and the €1.95m Speak Of The Devil. 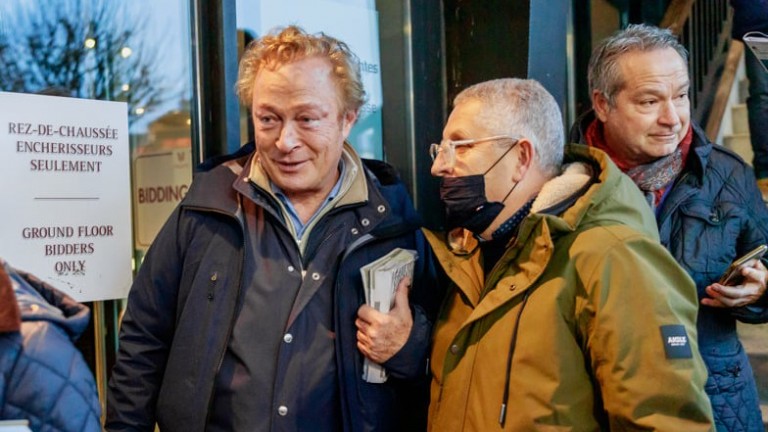 Michel Zerolo topped the buyers' table, with his Oceanic Bloodstock signing for six lots at a total of €5.315m, also 13 per cent of turnover. As well as for Rougir and Speak Of The Devil, Zerolo also signed the ticket for the €180,000 Sisila, who jointly topped day two and was bought to join the agent's own broodmare band.

At close of trade on Tuesday, Arqana's chairman Eric Hoyeau and executive director Freddy Powell said in a joint statement: "After a turbulent 2020, 2021 has been marked by tremendous resilience at all levels and concluded with an outstanding Vente d’Elevage that exceeded all our expectations.

"With five millionaire fillies in the first session and a turnover in excess of €40 million for the first time, the sale continued its upward trajectory and has now taken on a whole new dimension.

"All the ingredients were present and this resulted in very good prices in the ring. Four of the five fillies sold for a seven-figure price were acquired as yearlings at Deauville in August or October, and some owners did not hesitate to reinvest during the sale, such as with Tickle Me Green and Sun Bear.

"The quality of the catalogue attracted many buyers from the United States, Japan, England, Ireland, Australia, New Zealand, Scandinavia, Spain, Italy, Turkey and all over France. We would like to thank our vendors who entrusted us with the best of their breeding and racing stock, as well as all our teams who worked tirelessly to make this sale a success.

"We wish everyone a very happy holiday season and look forward to seeing you in February."

'Best foal of the day' bound for County Limerick after topping Arqana at €60,000

FIRST PUBLISHED 6:26PM, DEC 7 2021
All the ingredients were present and this resulted in very good prices in the ring