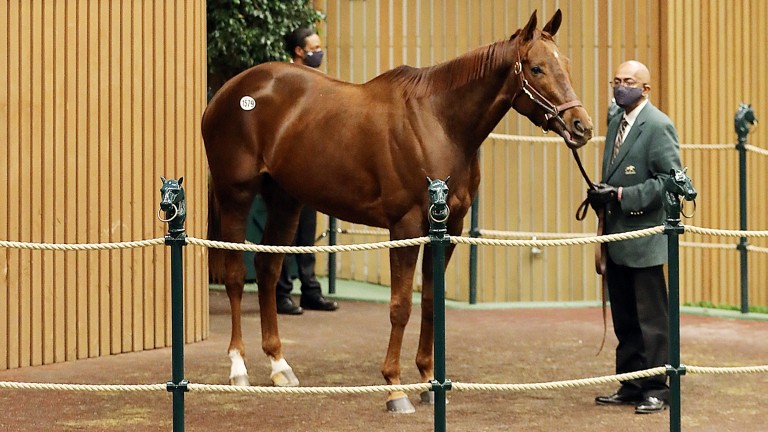 Go Big Blue Nation is heading to the Graham Motion stable
Keeneland photo
1 of 1
By Lauren Gash of BloodHorse 9:45AM, JAN 15 2022

The 2022 Keeneland January Horses of All Ages Sale concluded on Friday with results that offer a promising sign of the auction season yet to come.

"Overall, we are very pleased," said Tony Lacy, Keeneland's vice president of sales. "It was a continuation of the momentum we saw in September and November. Encouragingly, we aren't seeing spikes and valleys which make the market narrow; it has been quite broad in all respects."

Last year, the cumulative gross was $45,522,100, with the dispersals of Sam-Son Farm and the late Paul Pompa Jr. generating $13.5 million combined. The RNA rate was 21 per cent for the 260 horses that failed to meet their reserve.

"The clearance rate at 88 per cent is a good indicator of the market," Lacy said. "People can trade horses out. With the slightly higher RNA rate seen in book 1, I think people were being a bit more protective of their stock; they don't have to sell, which is not a bad thing." 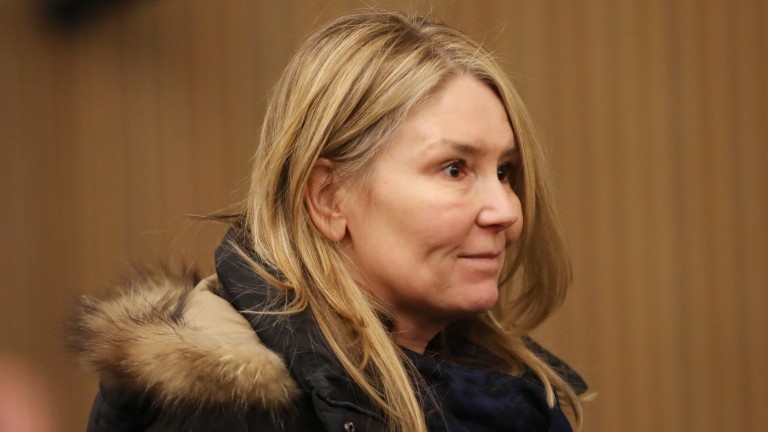 Jane Buchanan had been a notable buyer at the sale
Keeneland photo
On the final day in the supplemental catalogue, Go Big Blue Nation strode into the ring and commanded competitive bidding up to $225,000 from Jane Buchanan, racing manager for trainer Graham Motion, who purchased the five-year-old mare for client R. Larry Johnson.

A Kentucky-bred mare by Animal Kingdom, Go Big Blue Nation placed in the Kentucky Downs Ladies Marathon Stakes last year for Cannon Thoroughbreds and trainer Mike McCarthy and was fourth in the Possibly Perfect Stakes and Santa Barbara Stakes over the downhill course at Santa Anita. In 2020 she was fourth in the Grade 2 Las Virgenes Stakes on the dirt. Columbiana Farm consigned her as Hip 1579 with a record of 3-3-3 from 19 starts and earnings of $234,095.

"I purchased her for Larry Johnson. He is an owner/breeder in Virginia," Buchanan said. "She will go to Graham at Fair Hill, and the plan is to race her, then Larry will breed her. We will try to get a little more black type on her.

"They have done a terrific job with her; Michael McCarthy is an excellent conditioner, so she looks in great shape. They gave her a break over at WinStar, and she is now back under tack," Buchanan noted. "We will likely prep her for the spring races in New York or here at Keeneland; she still has allowance conditions left, which is key."

Buchanan made headlines on Wednesday with her $700,000 purchase of session-topper Belgrade, a three-year-old colt who will head to Motion for owners Carl and Yurie Pascarella.

After closing Friday morning on the late Gerry Dilger's Dromoland Farm, Chip Muth of Glendalough Farm beat out the competition to secure Querelle for $220,000, the session's second-highest price.

Paramount Sales consigned the Violence mare, a Grade 3-placed earner of $187,661 during her four-year career in Great Britain and the US, which she concluded with a 4-4-3 record in 25 starts on both surfaces. On the bottom side of the pedigree she hails from the family of Grade 1 winners Seattle Meteor and A Phenomenon and stakes winner Meteor Miracle.

"As of right now, she will probably go to Into Mischief or Constitution," Muth said. "This morning, I closed on the late Gerry Dilger's farm Dromoland on Spurr Road in Lexington and needed a horse to put on the farm. We will operate under Glendalough Farm at Dromoland." 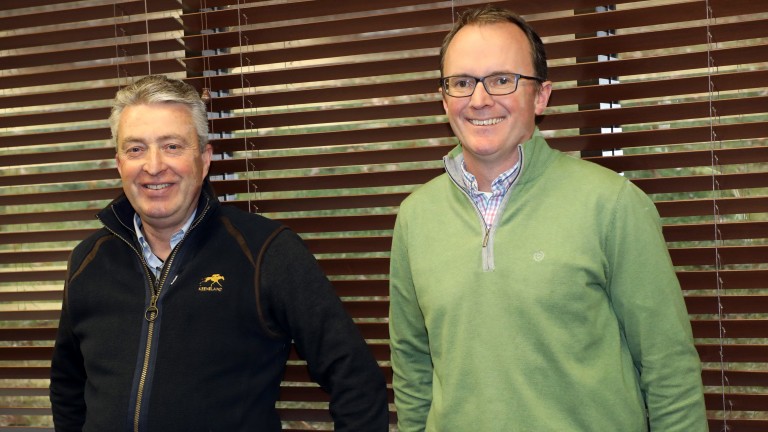 Keeneland's Tony Lacy and Cormac Breathnach were happy with overall trade
Keeneland photo
Querelle, consigned as hip 1468, led the session until the supplemental catalogue at the end of the night.

"I expected her to go this high," said Muth. "There is a lot of quality there. She's a nice mare that will work out well. I expected her right around that figure; we maybe reached out a hair farther, but I think she is worth it."

A colt by new sire Vino Rosso sold for $100,000 to Barry Lamb via the internet as the fourth session's highest-priced short yearling. Paramount Sales consigned the New York-bred colt out of Lauded as hip 1396.

Vino Rosso checked in second at this sale with yearlings sold for a gross of $937,000, with 12 changing hands. Gun Runner was the leader, grossing $1,005,000 for his five sold. A Gun Runner colt was the highest-priced youngster of the sale, bringing $375,000 from Narvick International for an undisclosed client during the opening session. Last year, a $475,000 Munnings colt topped the yearling section of the market, where 421 yearlings sold for $14,958,600 overall at a $35,531 average.

"If you do sell a short yearling at this time going into next year, there are pretty high replacement costs," said Cormac Breathnach, Keeneland's director of sales. "People are more willing to roll the dice on a little deeper in the year. There were a lot of short yearlings in book one that traded around the $200,000 mark, which is a sign that what was offered was popular."

A filly by Darby Dan's proven sire Dialed In was the final session's leading short yearling filly, selling for $49,000 to Michelle Redding. Indian Creek consigned the Kentucky-bred as hip 1406 out of the Smart Strike mare, Lotta Lolly, a full sister to Grade 1 winner Square Eddie.

FIRST PUBLISHED 9:45AM, JAN 15 2022
The clearance rate at 88 per cent is a good indicator of the market. People can trade horses out