‘Incredible’ $1.9 million I Am Invincible colt to feel right at home at Coolmore 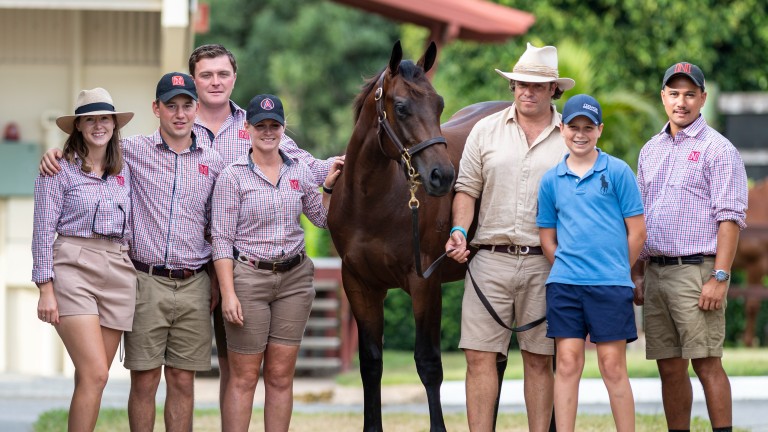 Tom Magnier (third from right) and the Newgate team with the session-topping I Am Invincible colt
Darren Tindale
1 of 1
By Tim Rowe of ANZ Bloodstock News 1:00PM, JAN 13 2022

Coolmore does not need to prove its strength in the marketplace, the global giant has done that many times, but its Australian principal Tom Magnier made his presence felt at the Magic Millions by signing for three colts, all worth more than A$1 million, led by the sales-topping I Am Invincible half-brother to Group 2 winner Dubious at a jaw-dropping A$1.9m (£1.01m/€1.21m).

With 2020 Inglis Easter sale purchase Home Affairs - a Group 2-winning juvenile who claimed the Coolmore Stud Stakes at Flemington last October to send his value soaring - assured of being the farm’s big-name first season sire later this year, Magnier was happy to leverage Coolmore’s clout in the hope of landing its next sire prospect.

And that he did, spending a combined A$4.1m on the three colts on day three of the Magic Millions Gold Coast Yearling Sale.

The son of I Am Invincible was the most expensive of the eight million-dollar lots sold, taking the auction’s tally to 12 seven-figure yearlings, and continued the surging demand for bloodstock underpinned by record numbers across all sale metrics.

The average and median were at A$298,668 - a sale record - and A$230,000 respectively, while the aggregate, fuelled by a sensational clearance rate that has maintained at 94 per cent, was A$154,112,500, up almost A$20m on the same stage last year, statistics which almost certainly ensure the 2022 Magic Millions sale will set another auction house benchmark when the last horse walks through the ring on Monday.

Magnier was as confident as one can be that the standout I Am Invincible colt has the credentials to replicate, or better, the deeds of Home Affairs.

He said: “I think he was one of the talking horses during the week. We have a great team here looking at the horses and they all landed on this horse, they liked him a lot.

A sale topper takes a great team effort.
Congratulations to all at @NewgateFarm.
It was joy all round when the Suspicieuse colt left the ring after being sold for $1.9 million today! #MMGC2022 pic.twitter.com/c4q7SO3v2B

“It’s a pedigree we all understand. With Dubious, it’s fast, and Chris Waller really liked the horse, and so that makes our job a lot easier.”

Born and raised at Newgate Farm, and marking the stud’s highest-priced yearling ever sold, he is the third living foal out of the French stakes-placed mare Suspicieuse, who was purchased privately by James Harron in 2020 carrying the resultant sale-topping colt. Harron negotiated the deal on behalf of clients including Belinda Bateman and Love Racing, and the colt’s price puts them well in front.

Harron, normally one of the main players jostling to buy a prized colt such as the I Am Invincible, described the result as “an amazing thrill”.

“He was very forward, very masculine and has great substance, but one thing that’s been quite incredible with this horse is his wonderful attitude all the way through,” he said.

“He’s got a real sense of confidence about him, he handles himself brilliantly, he doesn’t panic, just a very cool customer. He is quite unique in how he handled the sale.”

Newgate founder Henry Field said: “He’s one of those rare articles. I tell you what, when you’re in the horse breeding business, they’re very, very hard to breed. So, all the best to Coolmore, and I really hope he’s in their stallion barn in two years’ time.”

Suspicieuse, identified by agent Sheamus Mills at the 2013 Arqana December Breeding Stock Sale when purchased for €55,000, has a filly at foot by the Harron colts partnership-raced Arrowfield Stud stallion Pariah and she is currently not in foal.

The first of Coolmore’s purchases, after swinging and missing on Wednesday, was a A$1.1m Snitzel colt bred and sold by Emirates Park.

By the four-time champion Arrowfield Stud sire, which requires little explanation as to the yearling’s appeal, Magnier and his syndicate of partners, including trainer Waller, were also attracted by the fact he is out of Red Lodge, a US stakes winner who won twice as a juvenile for American trainer Wesley Ward.

Magnier said: “We like this horse a lot, but the thing that stood out for us was the Midshipman. Obviously, we have Golden Pal, probably the fastest horse in America, who is out of a Midshipman mare.

“Wesley Ward has been onto us all week because he trained the mother and it is a very, very fast family.”

Red Lodge, who was purchased by Emirates Park for US$500,000 out of the Keeneland November Breeding Stock Sale in 2018 when in foal to Kitten’s Joy, produced a filly by Emirates Park’s stallion and Newgate resident Tassort last year, before being covered by I Am Invincible.

The next generation!
You can always learn plenty from your Dad - particularly when it's Tom Magnier.
Charlie Magnier is a young star in and out of the saddle.#MMGC2022 pic.twitter.com/RG0VYuG0kd

From Not A Single Doubt’s final crop - as was Wednesday’s A$1.7m colt sold by Segenhoe - he had the endorsement of fellow Coolmore syndicate team members, Waller and agents Guy Mulcaster and James Bester.

“He was such a lovely horse with the strength, power and the width. He looks precocious and early,” Magnier suggested.

The continued upswing of the yearling market, which has gone into overdrive since the pandemic, is not a shock to Magnier.

“As healthy as the industry is in Australia, when you look at the prize-money and the way things are going in this country, we’ve known for a while it’s going from strength to strength,” he said.

Magic Millions managing director Barry Bowditch admitted he’d have got people’s “head read” if they had suggested the figures being achieved so far at the sale.

“A gross of A$154 million is a huge sale and the momentum we got over the first two days was evident today,” said Bowditch.

“There was bullish bidding; from the bottom to the top it was strong and I am speechless, to be honest, it’s an outstanding sale . . . and it’s exactly what we’re striving to do.

“When I say that, it is [our job] to find buyers at all numbers and add depth. It’s not just about finding buyers for the big horses.

“There’s work in them, but there’s just as much work in the lower end of the market and it’s just as vital for our vendors who support the sale at all levels.”

FIRST PUBLISHED 1:00PM, JAN 13 2022
He’s got a real sense of confidence about him, he handles himself brilliantly, he doesn’t panic, just a very cool customer