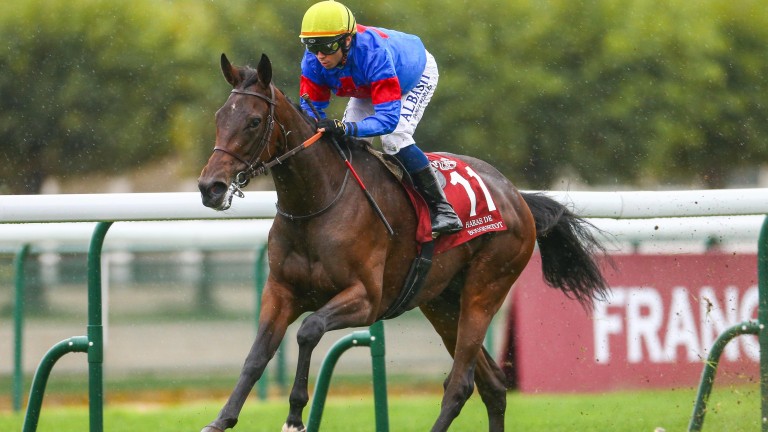 Purplepay: Group 1-placed daughter of the flourishing Zarak will be offered at the Auctav Flash Sale
© APRH / P-H FLAMENT
1 of 1
By Kitty Trice UPDATED 12:48PM, OCT 29 2021

Purplepay, a daughter of the Aga Khan's exciting first-season sire Zarak who was third in the Group 1 Criterium International behind Angel Bleu last weekend, will be sold at the Auctav Flash Sale on Thursday, November 4.

The Lisa Lemiere Dubois-bred two-year-old sold to Jean-Claude Rouget for €100,000 at Arqana's Select Yearling Sale last year and holds a fine pedigree, being a granddaughter of a half-sister to Johnny Barnes and to the dam of top-flight winners Most Improved and Ectot.

A consistent performer on the track for Cedric Rossi, Purplepay shelved her maiden tag on her fourth start before following up with a four-length win in the valuable Criterium Arqana at Longchamp on Arc weekend.

She then further strengthened her upwardly mobile profile when just a length and a quarter behind Angel Bleu and Ancient Rome in the Criterium International at Saint-Cloud.

Her trainer commented afterwards: “If she had been able to kick on at the same time as Angel Bleu, it is sure that the victory would have been hotly contested.

"She really proved that she was a Group 1 filly by finishing behind the first and third in the Prix Jean-Luc Lagardère. She recovered extremely well and is in great shape.”

Arnaud Angéliaume, the managing director of Auctav, said: “We thank Jean-Pierre Dubois and his associate Ecurie Hunter Valley for their trust.

"Our Auctav Flash Sale offers quality horses, such as Purplepay, a chance to be auctioned, in her case after her great performance in a Group 1 race where she showed that she has the potential to win one.”

Walzertakt, a Group-winning son of Montjeu, to stand at Chapel Stud for 2022