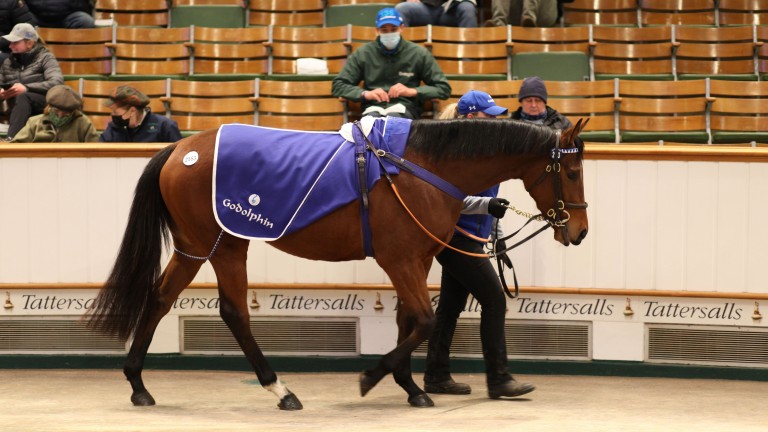 After a white-hot Tuesday session that was topped by the 2,200,000gns Waldlied, prices cooled a little during day three of the Tattersalls December Mares Sale on Wednesday, although a clearance rate of 87 per cent spoke of the ongoing strength of trade.

The market was headed by the unraced Bespangled, an unraced daughter of Dubawi offered by Godolphin who fetched 330,000gns from Billy Jackson-Stops. The Newmarket-based agent signed alongside the Turnbull family's Elwick Stud.

"The team at Elwick Stud were very keen on her and she was an obvious standout in this session," said Jackson-Stops. "They've had a lot of good horses along the way and they're revamping their stock. She's a very good individual, is by Dubawi and there are some nice horses coming along behind her. The pedigree really stands out and she will go to the straight to the breeding shed."

The three-year-old is a second-generation Godolphin homebred as she is out of Pure Diamond, a Listed-winning daughter of Street Cry and the German champion two-year-old White Rose, who joined the Darley fold through Blandford Bloodstock at 620,000gns in 2007. 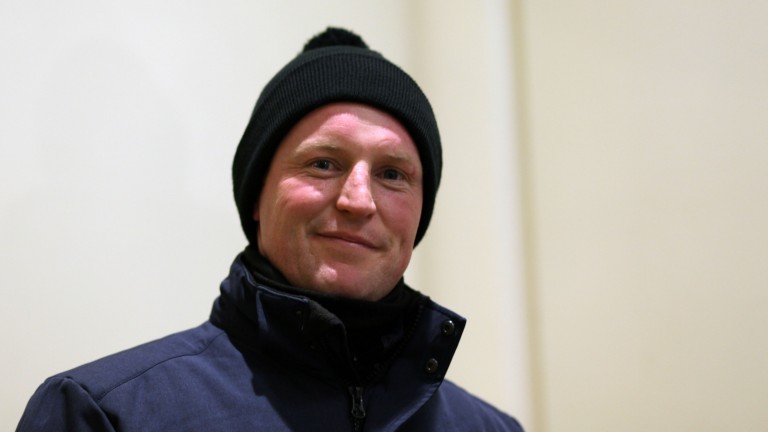 Pure Diamond has bred one winner from as many runners, namely Charlie Appleby's Symbol Of Light, who looked a smart prospect with two bloodless victories on the all-weather this autumn. The mare also has a yearling filly by Frankel and a Kingman colt foal in the pipeline.

Elwick Stud, whose founder Geoff Turnbull passed away aged 74 in July last year, saw their flag bearer Lord Glitters gain a lucrative and much-deserved success in the Group 3 Bahrain International Trophy earlier in the month. The Turnbull colours were also carried to success by the Julie Camacho-trained Burning Emotion, a daughter of the owner's Miondialiste, at Kempton yesterday.

Godolphin sold 84 lots across the first three sessions of the December Mares Sale, which in turn generated receipts totalling 4,629,500gns and an average price of 55,113gns.

The Godolphin-consigned Ragsah, who is out of Colorado Dancer, a Group 2-winning and Group 1-placed daughter of blue hen Fall Aspen, has bred two winners of her own, including the Grade 2-placed Richmond Avenue. 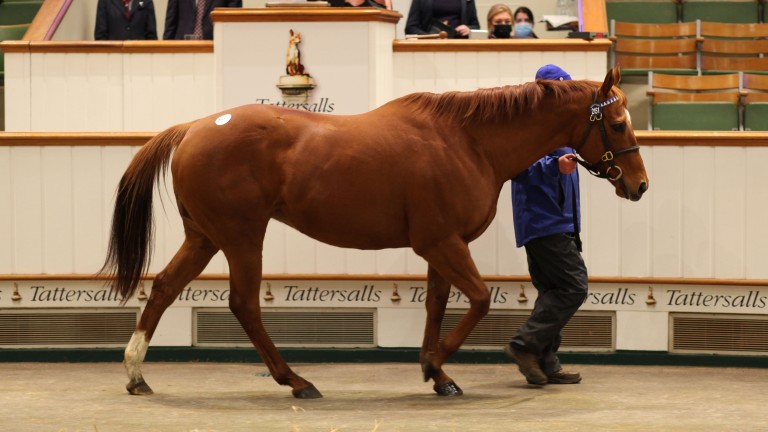 "She's been bought for an existing client, one of our greatest supporters," said O'Brien, who signed alongside the name of Essafinaat UK, the banner under which Sheikh Mohammed bin Khalifa Al Maktoum operates.

The 13-year-old, who was covered by Farhh but believed not to be in foal, was a talented performer herself, having finished second in the Firth of Clyde Stakes at two and fourth behind Hooray in the Cheveley Park Stakes.

"We're delighted to get a mare with that profile," continued O'Brien. "She has not got a blemish-free breeding record [slipped in 2013 and aborted early in 2019] but she's a sister to an iconic horse. It's brilliant and it bolsters the team at home fantastically well. We will take her home, regroup and make a plan as we have absolutely nothing in mind as yet."

Yeomanstown get behind Supremacy

The Shadwell-consigned Nawassi looks set for a date with Middle Park Stakes hero Supremacy after Yeomanstown Stud secured the winning daughter of Dubawi and Maqaasid on a bid of 120,000gns.

The six-year-old has already produced two foals, namely a 2020 filly by Exceed And Excel and a 2021 colt by Dark Angel who was sold to Philipp Stauffenberg for 100,000gns just last week. She was offered in foal to Nunnery Stud's Eqtidaar.

"She's a very good-looking Dubawi mare from a good family," said Yeomanstown's Robert O'Callaghan. "Being a daughter of a Queen Mary winner was a big draw. Her foal that sold here the other day for 100,000gns was a beauty, he was a great-looking foal and was bought by Philipp Stauffenberg. It makes it a lot easier to buy these mares when you can see what they're producing and she was the one we really wanted to get today." 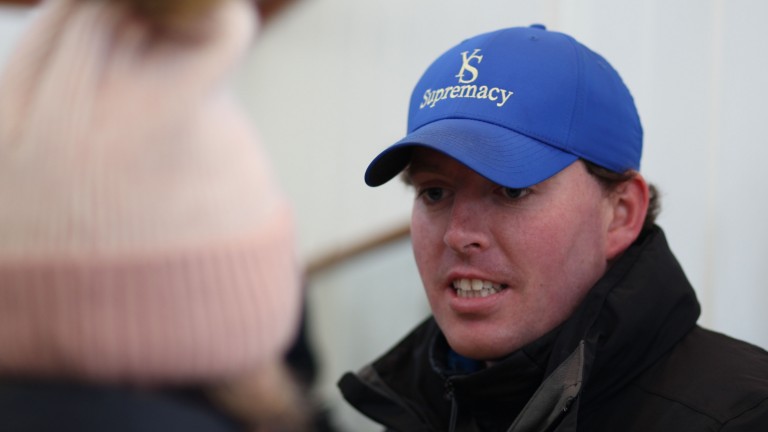 Robert O'Callaghan: "Being a daughter of a Queen Mary winner was a big draw"
Laura Green

Supremacy, a son of Mehmas, has been introduced at a fee of €12,500. O'Callaghan continued: "I think she'll go to Supremacy. Her Dark Angel foal was very good and obviously he's bred along the same lines. We're trying to buy some nice fast mares to go to him and we're extremely excited about him.

"He's going down very well, breeders are very interested in using him. He's the first Group 1 winner to retire to Yeomanstown since Dark Angel. If he could be half as good as him we'd be very happy!"

The Yeomanstown team were also in action during Tuesday's headline session, when their haul included the 220,000gns Torricella, a Dubawi half-sister to Territories, and Nunthorpe runner-up Que Amoro, who fetched the same price.

"We bought Que Amoro last night and she'll go to Dark Angel," added O'Callaghan. "She was very fast and obviously she was second to Battaash in the Nunthorpe, so we were keen to get her."

Grassick keeps it in the family

Cathy Grassick of Brian Grassick Bloodstock was another to dip into the Shadwell draft when going to 80,000gns for the Listed-placed Ghazawaat, a six-year-old daughter of Siyouni offered in foal to Tamayuz.

Ghazawaat has bred two foals, the first of which, a filly by Dark Angel, topped the Goffs Sportman's Sale at €140,000 when bought by none other than Cathy Grassick.

"She's been bought for an existing Irish client," said the agent. "I bought her daughter, who topped the Goffs Sportsman's Sale and I like her a lot - she's going to Jessica Harrington."

On Ghazawaat herself, Grassick added: "It's hard to tell at this stage but you can't really go wrong with a stakes mare by Siyouni as he looks like he'll be a broodmare sire for the future. 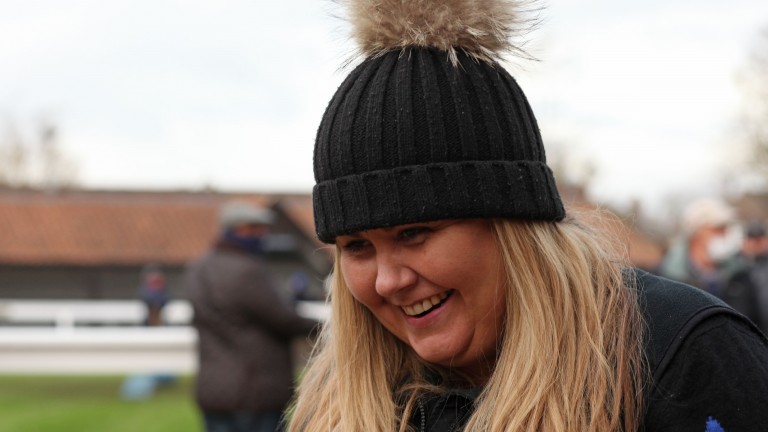 Cathy Grassick: "She has the quality of Siyouni and the strength and colour of Choisir"
Laura Green

"She's also got the benefit of being out of a Choisir mare, and he's been lucky for me as a broodmare sire. She's a real mix of Choisir and Siyouni actually; she has the quality of Siyouni and the strength and colour of Choisir and I really liked those qualities in her. The client will get her home before deciding on next year's mating."

The purchase of Ghazawaat was not the only December Sale exchange giving Grassick cause for cheer, as she also saw Flotus and Shades Of Blue, who were bred by her family's Newtown Stud, fetch a combined 1,850,000gns during Tuesday's session. The former went the way of Katsumi Yoshida at 1,000,000gns and the latter was bought by Michel Zerolo for Peter Brant at 850,000gns.

Goff and Coleman get involved

A brace of Shadwell mares fetched 65,000gns, with Tahneed bought by Matt Coleman of Stroud Coleman Bloodstock and Urjuwaan knocked down to Blandford Bloodstock's Tom Goff.

Tahneed was a 550,000gns Book 1 buy by Shadwell back in 2017 but failed to make the racecourse. However, her pedigree still makes plenty of appeal, being a daughter of War Front out of a stakes-placed half-sister to Golan and Tartan Bearer. Earlier this year she produced a colt by Masar, who sold to Tally-Ho Stud for €68,000 at Goffs, and she was offered in foal to Awtaad.

"She's for James Rowsell of Ashbrittle Stud to breed from," said Coleman. "I was the underbidder to Tally-Ho on her Masar foal, he's a really nice type. She's a nice mare from a good pedigree."

Goff's purchase has a more extensive breeding record, having bred the Listed-placed Alfareeq, while the mare's two-year-old, Tahasun, was placed at Chantilly since the catalogue's publication.

"I've bought her for a client in Ireland so she'll head back there," said Goff. "It's a proper Shadwell page and we've been looking to get into one of the families that Sheikh Hamdan made, rather than bought into.

"This goes back to Bahri and Bahhare and all those glory days with John Dunlop. She's got a good covering inside her, she's produced a good Dark Angel and the two-year-old has been placed in France."

The session saw 227 lots change hands at a clip of 87 per cent, while turnover reached 4,374,000gns, an 18 per cent dip on the corresponding session last year, when Juddmonte offered a significant draft that was presented on Tuesday this time around.

FIRST PUBLISHED 8:32PM, DEC 1 2021
The pedigree really stands out and she will go to the straight to the breeding shed