Another top lot for Time Test as 95,000gns colt leads the way at Book 3 finale 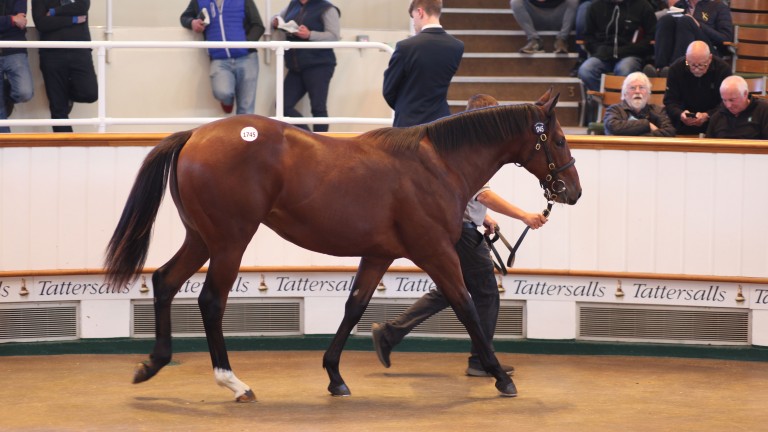 Sire on fire Time Test has rarely been far from the headlines during the Tattersalls October Yearling Sale, and the National Stud's promising young gun was responsible for the headline act at Friday's concluding session of Book 3.

The gangway filled up with interested onlookers as Whatton Manor Stud's colt, a sibling to two winners and from the Gredley family of User Friendly, took to the Park Paddocks ring. Matters ultimately boiled down to Amanda Skiffington and owner Montgomery Motto, with the latter party winning out at 95,000gns.

"He was one of the best athletes I saw and has a lovely temperament to match," said Motto. "It's hard to go wrong with a Shamardal mare and she has produced a useful runner abroad [in Lory Di Tony]. I went a bit higher than planned but the money nearly always finds the horse. He’ll go to Richard Brabazon for breaking and we’ll make a plan from there."

Motto has not been a regular fixture of the Tattersalls buying bench in recent times, explaining that his attentions had previously been focused on training in the US.

He said: "I raced in the States as an owner-trainer but now I'm back in Europe and will be based here for the foreseeable future.

"I stopped training about seven years ago. I was based at Calder for about 15 years but I closed the stable and disbanded the team as it's a bit too much work for me right now. 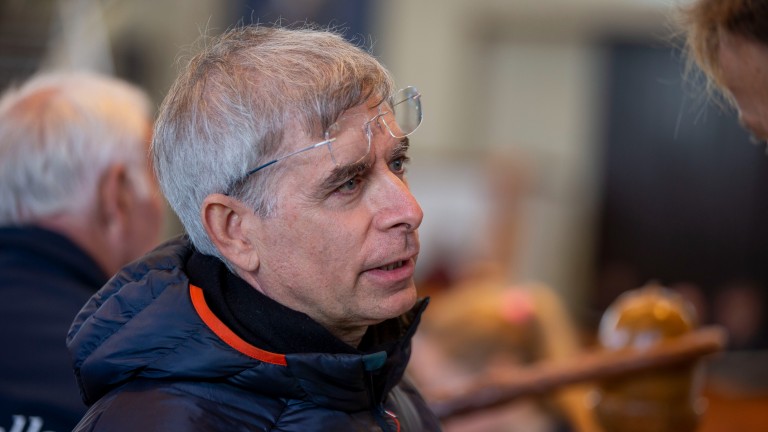 Montgomery Motto: "It's been very hard to adapt my eye from the American horse"
Laura Green

"It's been very hard to adapt my eye from the American horse. I tend to like a compact early sprinter type, but I bought four at Goffs, all fillies and all early two-year-old types. This is the only colt I have so my string is rather unbalanced at the moment.

"Richard will take his time with them and give them a bit of work in March and then we'll decide what to do at that point. I also spent quite a bit of time in Italy, so that's an option, as are France, Ireland and Britain."

Time Test's second-crop are headed by the 400,000gns colt who topped Wednesday's session of Book 2 when snapped up by Alastair Donald on behalf of King Power Racing, while the group have averaged £64,235. The son of Dubawi has fielded nine European winners, including four successful in stakes company.

Just as had been the case at the preceding Book 2, and to the surprise of few who witnessed the sheer strength of trade up close, Book 3 produced a record-breaking set of results.

The median, so often the most representative barometer of market health, showed the biggest gain, with a rise of 64 per cent generating a return of 18,000gns. That final number is full 7,000gns higher than the 11,000gns registered 12 months ago.

Yearlings from the second crop of Overbury Stud's sire sensation Ardad have also been in high demand throughout this sales season, thanks in no small part to the exploits of Prix Morny and Middle Park Stakes winner Perfect Power.

The dual Group 1-winning colt's trainer Richard Fahey has another son of Ardad to look forward to in 2022 after assistant Robin O'Ryan secured the colt out of Night Affair from Throckmorton Court Stud on a bid of 85,000gns.

Nancy Sexton, taking instructions on the phone from behind the partition, filled the role of underbidder. 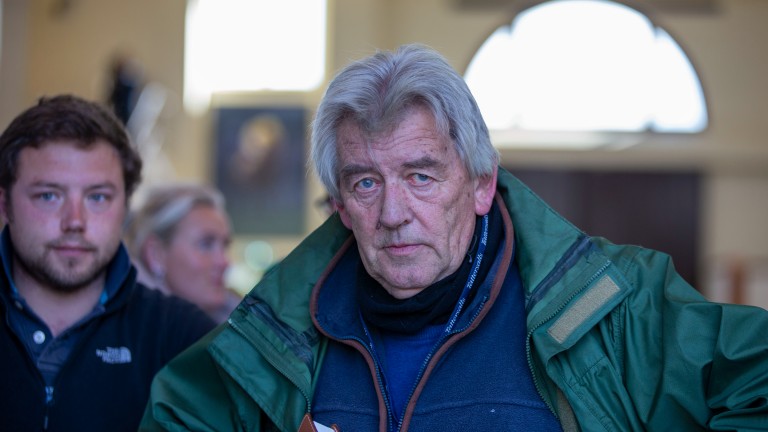 Robin O'Ryan: "Trade has been very strong, which doesn't make our job any easier"
Laura Green

"I don't know whether that's good or not!" joked O'Ryan after being informed his purchase was heading the market. "Obviously the stallion speaks for himself, Ardad has done really well and hopefully he can be another Perfect Power. Both this colt and Perfect Power are racy horses, we actually had three Ardad two-year-olds and they've all won."

The colt, out of a Bold Edge half-sister to Group 1-winning sprinter and Cheveley Park Stud stallion Twilight Son, was sourced on behalf of owner Steve Bradley, who stood besides O'Ryan and added: "He looks like a nice early type and these boys [Robin O'Ryan and Peter Fahey] recommended him. He's got Twilight Son on his page and hopefully he can be lucky for us."

Reflecting on a busy five days of action at Park Paddocks, O'Ryan said: "We've bought 15 here this week. Trade has been very strong, which doesn't make our job any easier but it's healthy for the game. It's good to know there's plenty of interest from people who want to invest in racehorses."

Tally-Ho Stud has enjoyed a fruitful time of it at the October Yearling Sale with 36 lots sold for receipts totalling 4,206,000gns. The O'Callaghan family have also been busy on the buying front too and got among the action on Friday when they landed a Zoustar filly through Hamish Macauley Bloodstock at 77,000gns.

"Tony O'Callaghan has bought her to breeze or race," said Macauley. "She was a stand-out today. We tried to buy two Zoustars at the end of Book 2 and we didn't get near them. He's obviously done very well in Australia so hopefully he can do the same here."

The filly, who was consigned by Chasemore Farm, is out of Roger Sez, a Group 3-winning daughter of former Tally-Ho stallion Red Clubs.

Barberini back for more

Federico Barberini was among those in action early on when a bid of 50,000gns landed the Sioux Nation filly out of Gregoria consigned by Redgate Bloodstock.

Barberini had stood besides Joe Foley when the pair secured a 100,000gns New Bay colt on behalf of Clipper Logistics during the closing stages of Thursday's session, and the agent confirmed the filly was for the same connections. 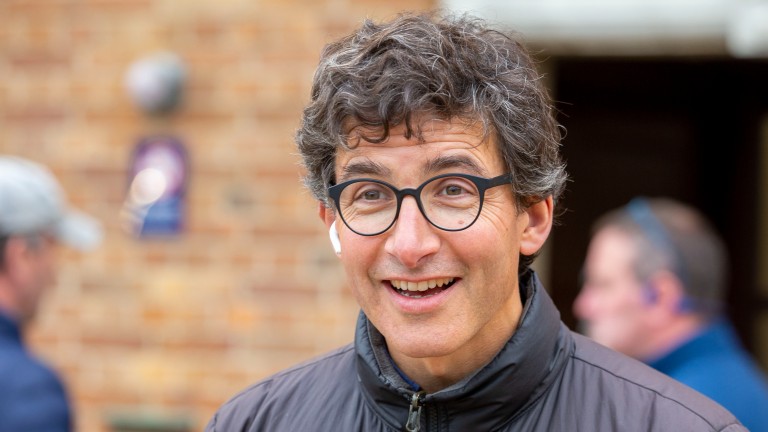 "We saw her a few times yesterday and she's just a lovely filly by a first-season sire and out of a mare who's already produced a winner," said Barberini. "She's the first Sioux Nation I've bought and she's a good advertisement for the sire.

"She looks like she's going to be a two-year-old but obviously she'll tell us how early she is. Not only is she very good looking but she comes from a very good farm too, Damian and Emma [Flynn] do a great job."

Another Nathaniel for Jarvis

William Jarvis has tasted Group 1 success this year thanks to the progeny of Nathaniel, with the Newsells Park Stud stallion responsible for the trainer's Nassau Stakes heroine Lady Bowthorpe.

And Jarvis got among the buyers at Book 3 when going to 45,000gns for the Nathaniel colt out of Lanita offered by Glidawn Stud.

The colt hails from a deep German pedigree as his dam is out of a sister to the champion Lando. Jarvis said: "He comes from a lovely German family and I thought he was an outstanding walking horse.

"He went for a bit more than I thought he might but I'm very happy to have him. He's been bought for a partnership."

FIRST PUBLISHED 8:21PM, OCT 15 2021
He was one of the best athletes I saw and has a lovely temperament to match