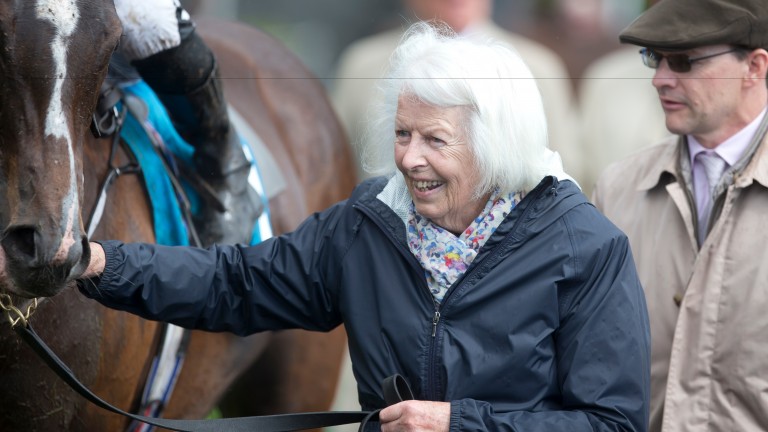 An elated Evie Stockwell leads in Brave Anna after her homebred won a maiden at the Curragh in May
Patrick McCann
1 of 1
UPDATED 12:13PM, APR 16 2020

This article was first published in November 2016

There was a moment at the Curragh earlier in the year when the simple joy of owning a racehorse was encapsulated by a single image.

Two-year-old Brave Anna was returning victorious under Seamie Heffernan after taking the opening maiden on Irish 2,000 Guineas day. As she made her way back through the paddock, her 91-year-old owner Evie Stockwell took the rein and accompanied her filly back to the winner's enclosure.

Photos show Stockwell wreathed in smiles and even now when recalling that afternoon, her face lights up and every moment is remembered in great detail. This is someone who has watched racing closely for many years, not just as a participant but as mother to Coolmore supremo John Magnier. It is remarkable to think of all the landmark moments that Stockwell has witnessed.

But, above it all, the actual joy of winning a race has not diminished.

You can imagine the excitement, then, when her Hit It A Bomb, Brave Anna’s older brother, won last year’s Breeders’ Cup Juvenile Turf at Keeneland.

“I didn’t go to Keeneland,” she says. “But it was tremendously exciting. He has what I call the ‘Delaney kick’. I was on the edge of my seat watching him and there it was, this great kick at the end of the race. The phone didn’t stop ringing at all afterwards.”

Described in Vincent O’Brien’s official biography as a ‘lady of great style’, Stockwell has a select group of horses running in her colours each year. She is in the midst of a purple patch given the exploits of Brave Anna, who heads into winter quarters as a live Classic candidate following her victory in the Cheveley Park Stakes, and Hit It A Bomb. Stockwell was also involved in this season’s Listed winner We Are Ninety with her twin sister Lady Mimi Manton.

There have been plenty other highlights down the years as well. For instance, Brave Anna and Hit It A Bomb are out of Liscanna, who won the 2007 Ballyogan Stakes for Stockwell and David Wachman, with whom she has enjoyed much success. In turn, Liscanna was bred by Western Bloodstock out of Lahinch, who won the Leopardstown 1,000 Guineas Trial for Stockwell in 2001. Stockwell has raced the majority of this family, including Liscanna’s half-brother The Bogberry, one of the better two-year-olds from Hawk Wing’s first crop who went on to win the Kilternan Stakes at three.

Then there was Luas Line, well named as a daughter of Streetcar, who was trained by Wachman to win the 2005 Garden City Breeders’ Cup Handicap at Belmont Park. Another filly, Toroca, ran third in the 2001 1,000 Guineas and later landed an Italian Group 3, while Kitza was placed in the Irish 1,000 Guineas and Oaks. Theann, named after Stockwell’s granddaughter Anthea, won the 2007 Summer Stakes at York and has since gained greater fame as the dam of Grade 1 winner Photo Call, the recent conqueror of Tepin.

In all, Stockwell has campaigned 13 black-type horses from fewer than 40 runners in Britain and Ireland since 1996, allowing great opportunity for her 'Madonna blue' and brown colours to be aired in elite company.

“It’s a tremendous thrill to see your colours pass the post, very exciting,” says Stockwell. “The colours belonged to my father-in-law, Michael Magnier, and then to my late husband Tom. Then I took them over and I’m going to give them to my grandson Tom in Australia. We all seem to love them - they’re the foundation colours.”

Cork-born Stockwell was familiar with racing in her youth but it wasn’t until 1947 when she married Tom Magnier, then at the forefront of jumps breeding in Ireland as the owner of Grange Stud in Fermoy, home of the great jumps stallion Cottage, that she became fully immersed in the racing world. Today, she is regarded as an excellent judge of horse flesh by those who know her.

“My family all hunted and my twin was a good rider but I hadn’t enough nerve,” she says. “I used to play golf and in the summer, my twin and I used to play tennis.”

Stockwell continues: “My father had a great friend, James V Rank [owner of Cheltenham Gold Cup and Irish Grand National winner Prince Regent], and we were always interested in how his horses were going with Tom Dreaper. We would go racing a bit but I never had a horse in training. Then I married Tom.

“We had had a lovely shrub garden at home and I was used to showing it to people. When I came to Grange, it was the mares - very similar really, something you take pride in.”

Grange Stud was by then well established as a leader in its field through the stud achievements of Cottage, sire of Vincent O’Brien’s triple Gold Cup winner Cottage Rake among a host of other great jumpers.

In due course, Grange also stood 1946 Cheltenham Gold Cup winner Fortina, the only entire to ever win the race.

“He was a tough horse,” she says. “I remember he was a wonderful copper chestnut with white spots, and a French-bred, so almost a forerunner to today.

“He was never a horse to cover a large number of mares - it was a different age - but he got a lot of quality horses.”

Quality horses indeed; the list of performers sired by Fortina included Cheltenham Gold Cup winners Fort Leney and Glencaraig Lady as well as Fortria, who pulled off the remarkable feat of winning the Champion Chase and Irish Grand National in the same season in 1961.

Tom Magnier died in 1962 and Stockwell was left with four children - John, Peter, David and Anne - to raise. John Magnier had been studying at Glenstal Abbey but left school at 16-and-a-half to ensure the smooth running of Grange, then also a working farm.

At the time, Grange stood horses such as the Vincent O'Brien-trained 1958 Queen’s Vase winner Even Money and later took on the 1967 Goodwood Cup winner Wrekin Rambler, who died young.

“Of course what really helped everybody was the stallion tax exemption in 1969. That was when the best of blood flowed into Ireland.”

By the mid 1970s, Coolmore, with John Magnier at the helm, was well on the way to becoming the juggernaut of today. Stockwell later remarried and in July 1996, the old Magnier colours of Madonna blue appeared in her name for the first time when Best Before Dawn won at Tipperary.

A year later, her first really good horse of recent years, Kitza, made a winning debut under Christy Roche at Naas.

“Kitza was the foundation,” she says of the Danehill filly who was bought at Goffs and named after relations in Denmark. “She came close to winning the Irish 1,000 Guineas but Jamie Spencer on Tarascon was behind in her slipstream and got her near the line.

“Later I had Toroca. She was named after a pony I rode in Kenya. I hadn’t been on a horse in a long time and I think I was up there for about two and a half hours!”

Naming horses is one of the great pleasures for Stockwell; over the years, they have represented relations, places or in the case of this year’s Down Royal winner The Yellow Bus, an old joke.

“Theann I named after my granddaughter Anthea and she actually used to ride her at Ballydoyle,” says Stockwell. “She was out of a good mare, Cassandra Go. Aidan loved this filly at Goffs and said he couldn’t go home without her.

“When he dropped her back in trip as a three-year-old, that was it. She was good.”

She adds: “It can be very difficult to get a name. With Hit It A Bomb I wanted to get the Lahinch connection [Lahinch golf club] in.

“One day I was playing golf with an American friend. We were playing on an elevated part of the course on the 17th tee and there were people watching. And I remember her announcing that she was going to ‘hit it a bomb!’ It became a joke. It’s a fun name.”

We Are Ninety, meanwhile, was named in recognition of her owners when they leased the filly in their 90th year.

“My sister wanted something to run in her colours and so we leased this filly from [son] Peter,” she says. “He has a wonderful farm, Brittas House Stud, and a great mare Brigid [dam of Group 1 winners Listen and Sequoyah and granddam of Henrythenavigator]. We Are Ninety is a granddaughter of Brigid.

“Hugo Palmer liked her from the beginning and she gave us tremendous fun.”

We Are Ninety, who took in the Ribblesdale Stakes and Irish Oaks following her Newbury Listed win, has been retired but plans are now in motion to find another horse to run for the twins, now in their 92nd year.

For now, however, the focus is on Brave Anna. The daughter of War Front struck up an excellent partnership with Heffernan during the past season, going from her Curragh maiden win to victory in the Albany Stakes at Royal Ascot. On her most recent start in the Cheveley Park Stakes, she lived up to her name by showing great tenacity to run down Lady Aurelia and nose out Roly Poly at the line. O’Brien was later on the record as crediting Stockwell with the suggestion of dropping the filly back down a furlong to six.

“We’ve had the Lahinch line a long time and it’s been good to us,” she says of the filly, whose name represents a combination of War Front and Liscanna. “It’s good that we know Brave Anna acts at Newmarket. She’s a very brave filly and has a lovely temperament, as does Hit It A Bomb.”

Today, Stockwell continues to be based in Ireland. She enjoys her visits to Ballydoyle - “Aidan is fantastic and has a great back-up team” - and overall keeps a firm eye on the racing world. She is particularly keen on the stud prospects of Camelot.

“A great joy of mine comes at 10am every day,” she says. “A cup of coffee and the Racing Post. Everyone knows not to ring me at that time!”

A few moments in Stockwell’s company and the enjoyment she receives out of her horses becomes very tangible. In Brave Anna, she certainly has something to enjoy with an eye towards next May.