Niece of Guineas winner Poetic Flare among the Goresbridge offering 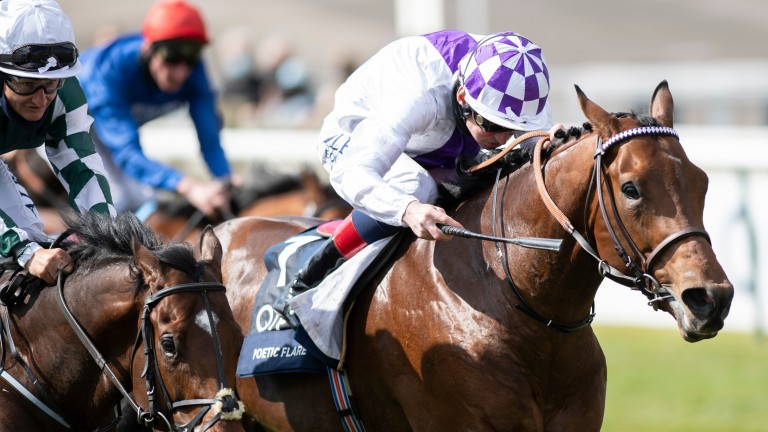 Poetic Flare provided a perfect update in the Newmarket Classic
Edward Whitaker
1 of 1
By Tom Peacock 5:17PM, MAY 7 2021

One entry in next month’s Tattersalls Ireland Goresbridge Breeze-Up Sale can boast the most impressive of catalogue updates as the first foal of a half-sister to 2,000 Guineas winner Poetic Flare.

The chestnut daughter of Cotai Glory, who has already hit the ground running with his first crop, is being offered by Seamus O’Donnell’s Windmill Stables on June 3.

She is out of broodmare Mariora, by Teofilo rather than Poetic Flare’s Dawn Approach, who was also bred by Jim Bolger but sold by the trainer for just €5,000 after making only one appearance.

"She goes well, she’s a lovely filly and hopefully everything will go okay with her," said O’Donnell. "The stallion’s going well, he’s going to get early two-year-olds and had a nice winner recently; hopefully it’ll all work out.

"It’s the way it is sometimes. Poetic Flare wasn’t a bad type of horse last year, Jim did a great job with him and sometimes the pedigree can click - he won very well in the Guineas. I don’t have the mare myself, but it’s a good update."

O’Donnell, who is based just outside Tipperary town, combines selling a handful of breeze-up horses with consigning yearlings. A colt by Holy Roman Emperor out of a half-sister to the very smart sprinter Monsieur Chevalier will bring another campaign to a close at the rescheduled Goresbridge event in Newmarket.

"We do a few every year - nice horses are selling well, and if you don’t breeze well you can struggle," he said. "The Holy Roman Emperor is sharp and should breeze well. He’s not a big scopey horse but he can gallop."

FIRST PUBLISHED 5:17PM, MAY 7 2021
Poetic Flare wasn’t a bad type of horse last year, Jim did a great job with him and sometimes the pedigree can click