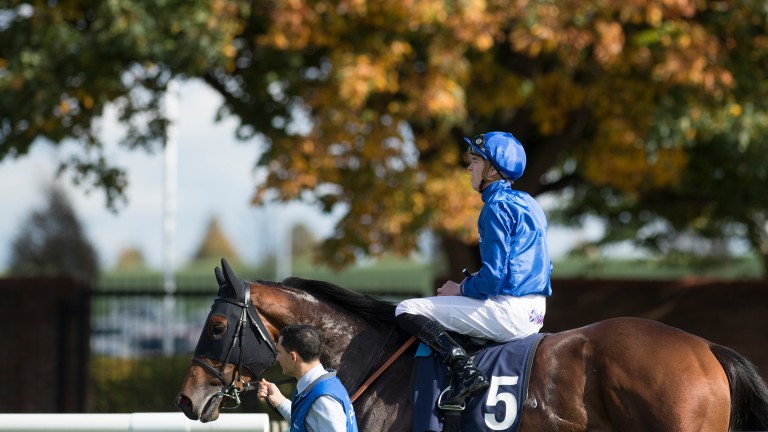 Ghaiyyath - pictured as a two-year-old - is out of Classic heroine Nightime
Edward Whitaker
1 of 1
By Martin Stevens UPDATED 6:01PM, SEP 1 2019

Dubawi ranks as one of the most dependable sources of high-class performers to have ever stood in Britain, while Galileo might just be the best stallion of the modern era.

Godolphin colour-bearer Ghaiyyath demonstrated on Sunday the magic that can happen when the influences of those two outstanding sires of our time are combined as he strolled to a 14-length victory in Germany's most prestigious all-aged race, the Grosser Preis von Baden.

The Charlie Appleby-trained four-year-old had shown considerable promise at two, when he won his maiden by five lengths and took the Autumn Stakes by daylight, but made only one start – albeit a winning one, in a Longchamp Group 3 – at three due to injury.

He looked a potential superstar when successful in the Prix d'Harcourt in April, but was a shade disappointing when a tame third in the Prix Ganay next time out.

Ghaiyyath certainly erased the memory of that effort on his first start since then at Baden-Baden. He made all the running under William Buick and had the rest of the field working hard to keep up with four furlongs still to go, before coasting home in splendid isolation with domestic challengers Donjah (by Teofilo) a distant second and this season's Deutsches Derby winner Laccario (by Scalo) in third.

Bookmakers cut him to around 16-1 for the Prix de l'Arc de Triomphe next month.

Ghaiyyath becomes the 41st Group/Grade 1 winner for Dubawi. Among the lengthy roll of honour that includes celebrities such as Al Kazeem, Postponed and Too Darn Hot are several others who have shone in Germany, including Deutsches Derby hero Waldpark and Grosser Dallmayr-Preis winner Benbatl.

Ghaiyyath is out of Nightime, who became the first of Galileo's 80 top-level winners when she was saddled by Dermot Weld to a six-length success in the Irish 1,000 Guineas of 2006 for his mother Marguerite, who owned and bred the filly.

Nightime, who is out of the Listed-winning Indian Ridge mare Caumshinaun, was retained as a broodmare by Mrs Weld and since her death in 2014 has been bred from by the family's Springbank Way Stud.

She has produced five winners in total, including another at the highest level in Zhukova, who took the Man O'War Stakes by six lengths in 2017 and was subsequently sold as a breeding prospect to Godolphin for 3,700,000gns.

Sheikh Mohammed's operation also had to dig deep to add Ghaiyyath to the fold, paying €1.1 million for him at the Goffs November Foal Sale in 2015.

Nightime has a yearling colt by Dubawi – sold to Stroud Coleman Bloodstock for 700,000gns as a foal at Tattersalls last year – and she delivered another colt foal by the sire in March. She was subsequently covered by Kingman.

Ghaiyyath is not the first example of Dubawi sparking with Galileo mares. 2,000 Guineas winner and exciting first-season sire Night Of Thunder was also bred on the cross, as were Group 2 scorer Dartmouth and the smart runners Red Galileo and UAE Jewel.

Dubawi covered more than 25 daughters of Galileo this year, as well as two half-sisters to Ghaiyyath in Midnight Fair and Zhukova and two sisters to Nightime in Phaenomena and Tajriba.

Named Halo but far from a saint: the shark-eyed stallion who shaped the breed

FIRST PUBLISHED 5:53PM, SEP 1 2019
Dubawi covered more than 25 daughters of Galileo this year, as well as two half-sisters to Ghaiyyath and two sisters to Nightime