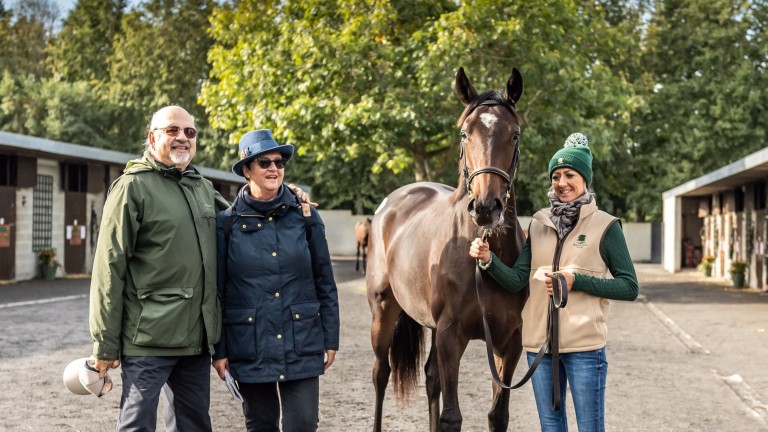 MV Magnier and the Godolphin buying team traded blows for the highly touted Galileo filly out of Green Room during the second and final session of the Goffs Orby Yearling Sale on Wednesday, with the former emerging on top at €3 million.

Bred by Vimal and Gillian Khosla, the filly was sent into the ring by Ballylinch Stud and is a full-sister to last year's Oaks heroine Forever Together and Fillies' Mile winner Together Forever. She is also a half-sister to the Prix Jean Prat scorer and sire Lord Shanakill, by Speightstown.

Magnier, who signed for the filly in partnership with Georg von Opel's Westerberg, said: "Firstly I would say that I’m delighted for Vimal and Gillian. It's a great result for them and they've been rewarded for putting a lot of faith in Galileo over the years.

"Obviously it's been a very lucky family for us already with Together Forever and Forever Together and this mare has produced another Group 1 winner in Lord Shanakill so she's an outstanding producer and we are lucky to be able to buy a filly like this as she really is a collector's item."

The April-foaled filly was introduced by auctioneer Henry Beeby as "bred in the purple and absolutely matching up to her pedigree", and bids quickly started to fly in from all sides as Sheikh Mohammed and his entourage took their place on the top balcony.

"You couldn't find a better physical specimen - she looks a Classic winner all over," called Beeby, as the bidding quickly rose in increments of €100,000 and €200,000.

Anthony Stroud and Amanda Skiffington were among the underbidders on the filly, but Magnier was not to be denied from his position by the far-side entrance.

Von Opel is in the process of building up a high-class broodmare band and also signed for the €2.2m session-topper on Tuesday, a Galileo full-sister to the three-time Group 1-winning miler Alice Springs.

Among the runners so far for his Westerberg operation are the John Gosden-trained Miss Yoda, a two-year-old Sea The Stars filly who is unbeaten in two starts, and Mythic, a twice-placed Australia filly in training with Aidan O'Brien.

The top lot is also a full-sister to the Karl Burke-trained Do You Love Me, who topped last year's Orby Sale when hammered down to Phoenix Thoroughbreds for €3.2m.

Green Room's Sea The Stars daughter Signe was the most expensive filly sold at the 2014 edition, when purchased by Skiffington for €1.1m. 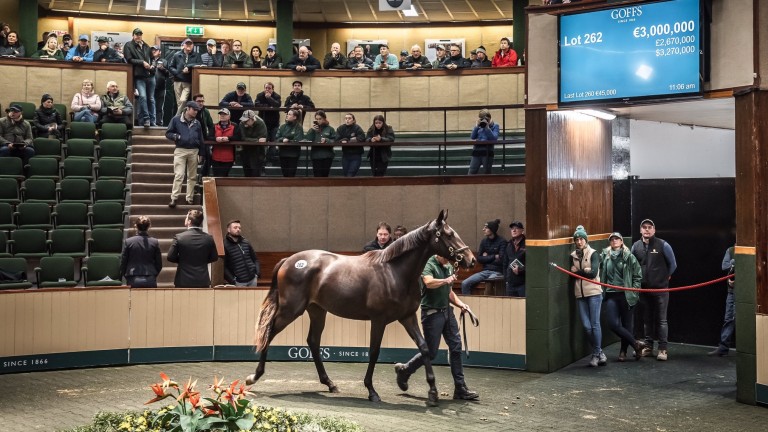 Rub of the Green

John O'Connor was quick to pay tribute to the outstanding producer Green Room - an unraced daughter of Theatrical who was bought by the Khoslas through Templeton Railton Farms for $240,000 at the 2006 Keeneland January Sale - and the Khoslas.

"It was an interesting if predictable battle for the filly," he said. "She's well up there as an individual with her sisters. They're all very good-looking, good-moving fillies, and I'd rate her at least as highly in that department as any of the others.

"Green Room has been with us since Together Forever was a foal. She's a nice mare but tends to breed them nicer than herself, and she has a very nice filly foal by Sea The Stars.

"What we can say is that Green Room is one of the most consistent mares ever. She's thrown top racehorses and sale horses with great consistency.

"It's fantastic for us to have her on the farm and we're delighted for the Khoslas - they're great owners, they have a great passion for it and they want everything done to the highest of standards which makes our job all the more easier." 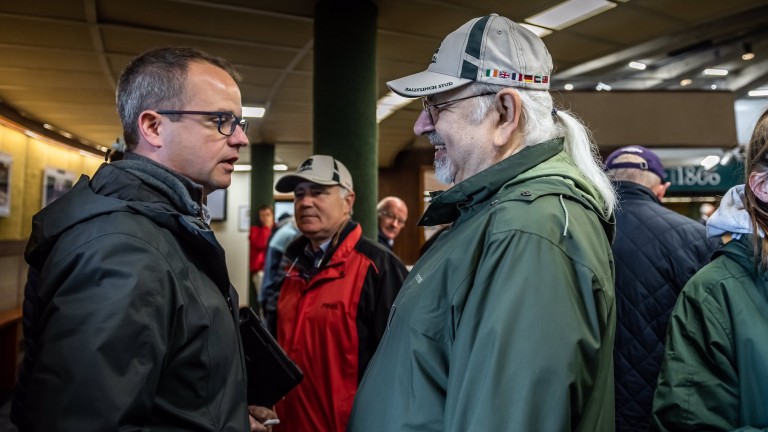 Among the more notable trades on the day was the €525,000 paid by Magnier for Glenvale Stud's Australia colt out of Gems, less than 12 months after he was pinhooked by Flash Conroy's operation for €56,000 at the Goffs November Sale.

The colt's pedigree received a significant boost when his No Nay Never half-brother Mystery Power landed the Group 2 Superlative Stakes at the Newmarket July festival on his second start.

The March-foaled youngster was bred by Siobhan O'Rahilly out of her Haafhd foundation mare Gems, who she acquired for just €5,500 at the Goffs February Sale in 2013.

Stroud returned to his usual position on the upper level when successfully bidding on a Sea The Stars colt for €500,000.

Offered by the Castlebridge Consignment on behalf of Kilcarn Stud, the March-born yearling is the second produce of the Listed-placed Invincible Spirit mare My Spirit, a half-sister to the Ribblesdale Stakes scorer Banimpire and the dam of Irish Derby hero Trading Leather.

"He's a very nice, athletic colt," said Stroud. "We like the sire and he comes from a very good hotel.

"Sheikh Mohammed saw him himself and really liked him, so we said we've have a go. We're very happy we were able to get him."

Stroud's purchase was the penultimate lot on offer by the sire in the Orby Sale, with the last into a ring an April-foaled colt from the family of High Chaparral and Dante Stakes scorer Black Bear Island.

Sent into the ring by Gormanstown Stud, the April-born colt found favour with Demi O'Byrne, who signed for the colt at €550,000 on behalf of Aquis Farm.

Aquis also teamed up with Phoenix Thoroughbreds on the €1m Galileo sister to the Irish Derby hero Sovereign during the opening session.

The Awtaad half-brother to this year's Irish 2,000 Guineas hero Phoenix Of Spain became the most expensive of his sire's offspring to be sold at public auction when catching the eye of Derrinstown Stud general manager Stephen Collins at €400,000.

"He's got an outstanding pedigree and is a half-brother to an Irish Classic winner," said Collins of Tally-Ho Stud's April-born colt, from his position opposite the rostrum.

"We stand Awtaad at Derrinstown and he's got some very nice offspring. We bought a few of his foals last year and have purchased a few more colts and fillies by him at the yearling sales."

The Goffs Sportman's Sale, which promises quality commercial yearlings and two-year-old types, takes place on Thursday and Friday, with selling commencing at 10am each day.

Goffs group chief executive Henry Beeby said in his end-of-sale statement: "A superb top price of €3 million heading a quartet of millionaires clearly shows that the Orby Sale sits at the top table of the international yearling market and is the measure of any sale anywhere for the best.

"Orby 18 was a record breaker and ultimately proved to be the best performing European yearling sale of the year from a statistical viewpoint. From a smaller catalogue demand grew and vendors were very happy.

"That success drove an increased application for places this year and the 2019 catalogue returned to previous year’s numbers which has probably resulted in a small drop in clearance rate although we would submit that 85 per cent is still a figure that reads well.

"Our average and median have not quite kept pace with last year but the average is still eight per cent ahead of the 2017 level (the median is the same) so we are quite satisfied our trade has proved in line with the year to date whether we are looking at results from Kentucky, France or the UK in that the market became stronger the higher the prices climbed.

"It will be interesting to see whether these trends continue and how the market finishes up later in the autumn.

"One of the real stories of Orby 19 has been the huge international interest and we have welcomed buyers from across the globe following our increased investment in buyer recruitment and the hard work of the Goffs team working in tandem with Irish Thoroughbred Marketing.

"It was wonderful to welcome Sheikh Mohammed back to Goffs along with his brother Sheikh Hamdan as well as several new faces of note whilst we remain indebted to MV Magnier and the Coolmore partners for their tremendous support year in, year out.

"Those big names naturally garner headlines but we are extremely grateful to every buyer at every level of the market and to each vendor for allowing us to handle their yearlings. As ever we are nothing without the horses and appreciate every one along with each bid they attract."

In pictures: the racing world descends on Goffs for the Orby Sale

FIRST PUBLISHED 8:31PM, OCT 2 2019
What we can say is that Green Room is one of the most consistent mares ever. She's thrown top racehorses and sale horses with great consistency