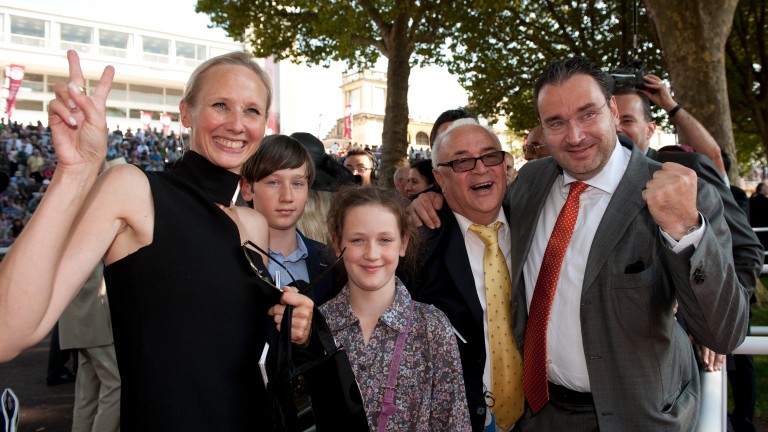 This article was first published in August 2019

Gestüt Brümmerhof wrote its name into turf history as the breeder of brilliant Prix de l'Arc de Triomphe and King George VI and Queen Elizabeth Stakes heroine Danedream, but it is far from a one-horse operation.

That much has been proved this summer, as the north German stud owned and managed by Gregor and Julia Baum is the owner and breeder of Waldpfad, who sprang a surprise by landing the Hackwood Stakes at Newbury by daylight, and also of Diamanta, the decisive winner of the Preis der Diana at Düsseldorf.

The run of success has come at just the right time to advertise the brilliant Brümmerhof bloodlines available to purchase at the BBAG Yearling Sale at Baden-Baden this month.

The stud's ten-strong draft includes a Golden Horn half-brother to Diamanta and a half-brother to stakes-placed Anna Mia and Anna Pivola by Diamanta's sire Maxios. It is completed by colts by Adlerflug, Lord Of England, Oasis Dream, Siyouni, Soldier Hollow and Zoffany, and fillies by Lope De Vega and Sea The Stars.

That list contains a blend of progeny of sires who are domestic big-hitters and those with more stark international appeal, but Julia Baum insists she and husband Gregor are not hostages to stallion fashion.

“For years we've stuck to the guideline of selling our colts and keeping the fillies,” she says. “As we don't have our own stallion at home, only shares in Adlerflug and Maxios, we have a wide variety of choice.

“We breed commercially, but the first thing we do when planning matings is to look at the pedigree, look at the horse – their physique and temperament – and then we choose the sires who suit best, not just those who are hot at the moment and might bring the most of money.

“We want to breed racehorses. That's our main ambition; it's not about making money.” 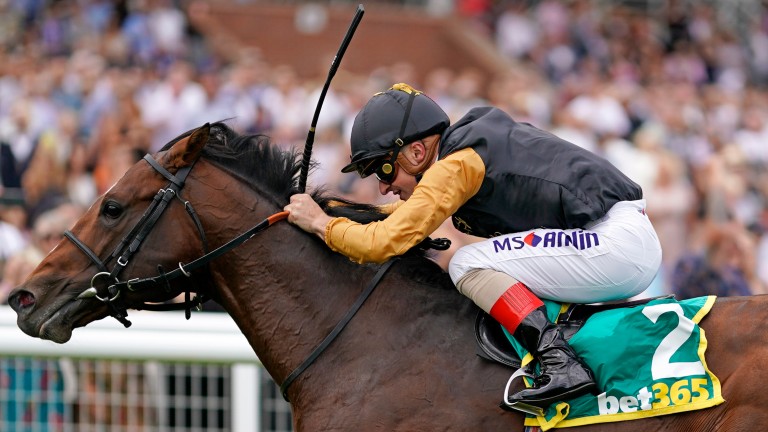 Waldpfad, a beautifully bred son of Shamardal who was originally a €390,000 vendor buyback as a yearling at BBAG, and Diamanta, one of those fillies retained to race by the stud, are certainly doing their best to suggest the Baums are achieving their goal.

Waldpfad has quite the interesting biography, as Baum explains: “We sent his dam Waldbeere to Shamardal as she suited a stallion with his conformation, and we knew that he would add a little speed to her family, which is known for stayers. We always like to add a little spice to those good German staying lines, to keep them relevant and up to date.”

Waldbeere's family is very good, and stamina-laden, indeed. She is an unraced daughter of Mark Of Esteem and German St Leger winner Wurftaube, making her a sister to Falmouth Stakes runner-up Waldmark, the dam of St Leger hero Masked Marvel and granddam of current middle-distance star Waldgeist. She is also a half-sister to German Derby winner Waldpark, and had produced the multiple Group 3 winner Wiesenpfad and Preis der Diana runner-up Waldtraut before Waldpfad arrived.

“Waldpfad was a very good-looking yearling but we wanted a certain price for him at the BBAG sale that couldn't be generated,” continues Baum. “So we took the horse home and syndicated him with two other parties of owners under the name Stall Chevalier d'Or and sent him to Andreas Wöhler to be trained.

“He ran very bravely as a three- and four-year-old over a mile, but he never coped with steps up to black-type level so, as the other parties wanted to get out due to financial problems and getting impatient, we decided to dissolve the partnership by selling the horse at the BBAG sales in October and we got the horse back.

“We took him to our private trainer Dominik Moser and changed some things about his health routine and way of training. He responded very quickly to the changes and soon showed us that he preferred much shorter distances. We've always been fans of Shamardal in our breeding, and weren't really surprised to discover his sprinting talent.

“He came back out this year after a break of several months in a Group race in Dresden over seven furlongs and he was beaten by a nose, and then he won over six furlongs at Hamburg very easily and scored in the Hackwood Stakes at Newbury.”

This article first appeared in our Summer Yearlings supplement, which contains essential news, features and statistics for auctions at Arqana, Goffs UK and BBAG in the coming weeks.

Waldpfad was sent off 33-1 at Newbury, a price that probably factored in punters' unfamiliarity with classy German sprinters. He's not the first, by any means, as the likes of Auenklang and Moser's Summer Stakes winner Gracia Directa preceded him; but the country is of course better known for its many middle-distance and staying celebrities.

The Baums are keen to keep sharpening those stout German families.

“When it comes to our own matings, we do like to add some speed to our German lines as we think that's what the modern racehorse needs nowadays,” says Julia. “We believe that German breeding is not only about stayers – we do have a lot of speed in our breeding too, thanks to the likes of Big Shuffle, Areion and Dashing Blade. We have these great German lines full of stamina, but we always like to add a little speed to be more competitive.”

Waldbeere produced a Postponed filly foal this year and her two-year-old Kingman filly is in training with Moser under the name Waldkonigin.

“We're big fans of this W family,” says Baum. “We're very lucky that we have a large share of it at Brümmerhof, breeding from four other mares including Wildfährte and her daughter Wild Approach, who was fourth in the Oak Tree Stakes at Goodwood three years ago.” 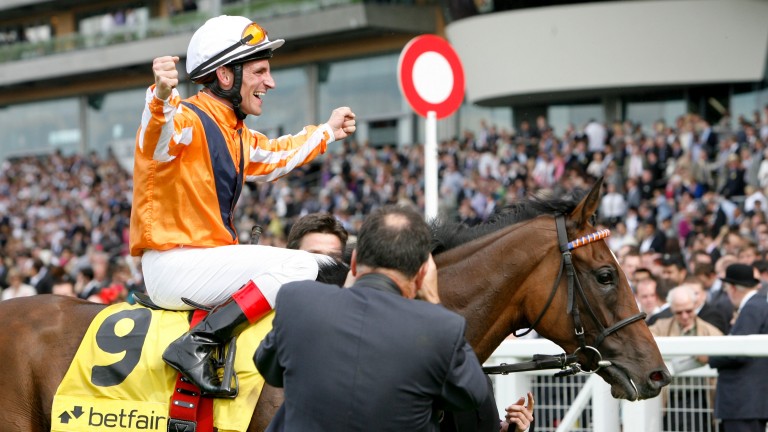 Danedream: the Baums wrote their name into turf history by breeding the Arc heroine
Mark Cranham

Brümmerhof is one of the few German outfits not afraid to compete in Britain, and are self-confessed Anglophiles.

“We've always been great fans of British racing and breeding,” says Baum. “We bought our best mares in Newmarket and we're always sending a lot of mares to be covered in Britain to keep our breeding on an international level.

“Racing our horses there is always very special for us; you need the right horse to be competitive, but we enjoy the horsemanship and the fair spirit at the races so much. We always say, even losing in England doesn't feel as bitter as it does at home!”

Brümmerhof recently experienced a big dose of bitterness that made the Preis der Diana triumph with Diamanta – a first Group 1 won by a horse carrying home silks – all the more poignant.

Baum says: “We bred and owned Anna Monda, who won the German 1,000 Guineas and Europa-Meile, but we sold her to Teruya Yoshida just before she won the Group 1 Premio Vittorio di Capua, so Diamanta made our dream come true by winning the German Oaks, a race every breeder wants to win. It has secured the future of the stud, to have such a mare in the broodmare band.

“But Oaks week started with mixed feelings as our favourite for the race, Anna Pivola, suffered from a career-ending injury on the Monday, so winning the Oaks with the second string was a rollercoaster ride of emotions. Tears of sorrow on Monday turned into tears of joy on Sunday.

“We didn't go to Düsseldorf, as we decided after the setback with Anna Pivola to stay in our house on Sylt in the North Sea, but the happiness about this win made the North Sea even more unruly that afternoon!”

What made Diamanta's victory all the sweeter was that she is a daughter of Maxios, a stallion in whom Brümmerhof holds a share. The dual Group 1-winning son of Monsun was retired to Gestüt Fährhof amid great expectations but has had a quiet start with his early runners. In fact, with his oldest crop aged four, Diamanta is his first Pattern winner of any kind.

“As shareholders in Maxios we always believed in the quality of the horse; we like him as an individual and his offspring,” Baum says. “They're very sensitive, they need a certain kind of management and I'm very happy that we were able to prove that he is able to sire Group 1 horses if you just leave them under the radar in training and don't push them too early.”

Now the Baums can look forward to presenting the Golden Horn half-brother to Diamanta at BBAG this month. “I think he's the best colt we'll show at the sales,” says Baum. “He just has something about him. He developed very well and I'm very pleased with him.”

And what would Baum say to agents, buyers and trainers contemplating whether to visit Baden-Baden? “You should never leave out BBAG sales, you can buy very sound horses from very sound German lines there,” is the answer.

“We do only have a small population of foals but recent history has shown that Germany is able to breed international champions like Danedream, Sea The Moon, Lando, Monsun, Tiger Hill, Shirocco, Lomitas and so on.”

The chance to emulate Brümmerhof's success by buying their stock should be incentive enough to book that ticket to Baden-Baden.

77 ch c Adlerflug-Mill Marin (Pivotal)
Colt out of a Listed-winning daughter of Pivotal, from family of Ronda and Istan

FIRST PUBLISHED 3:43AM, DEC 30 2019
We do like to add some speed to our German lines as we think that's what the modern racehorse needs nowadays