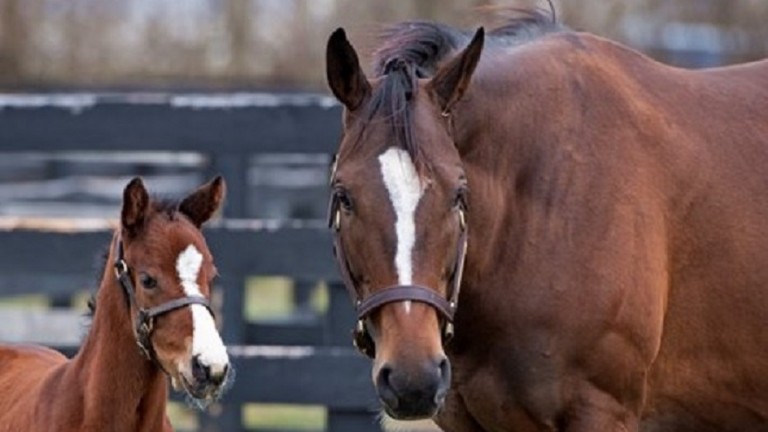 Back in January 2020, a 3,000-acre farm tucked away in Virginia's Shenandoah Valley sparked the attention of the racing world when the Exchange Rate mare Foreign Affair delivered the first foal for 2018 Triple Crown champion Justify.

Photos of the newborn soon appeared on social media, thrusting Audley Farm into the limelight as the thoroughbred industry buzzed with excitement. Two years later, that foal, now named How Lovely, lived up to the aura of expectations surrounding her birth with a decisive debut victory at Pimlico on Saturday.

"It's amazing. I can't tell you how happy the whole team at Audley is. You'd think we won the Grand Prix or something," Audley Farm manager Jamie McDiarmid said the day after How Lovely's glowing debut.

How Lovely was born in Kentucky at Amaroo Farm in Lexington. The bay filly with a large white blaze, just like her famous papa, failed to meet her reserve twice, first as a weanling at the 2020 Fasig-Tipton Fall Kentucky Mixed Sale and again as a yearling at the 2021 Keeneland September Sale. She raced in the silks of her breeder on Saturday.

"When she walked into the paddock I was just amazed by her," said McDiarmid. "I haven't seen her in maybe three months, and in the last three months she has just done so well and she looked incredible.

"She behaved immaculately, I couldn't believe it, she's got a very good mind on her. She got slammed at the start and got a little lost, but when jockey Victor Carrasco asked her, she found another gear, which was nice to see. We were thrilled."

Despite her rough start, How Lovely regrouped from the back of the pack and began rolling past horses into the far turn. Shouldering her way between rivals down the stretch, the 6-1 shot stormed to the wire, finishing in front by a length and a half in the five-furlong test on the turf. 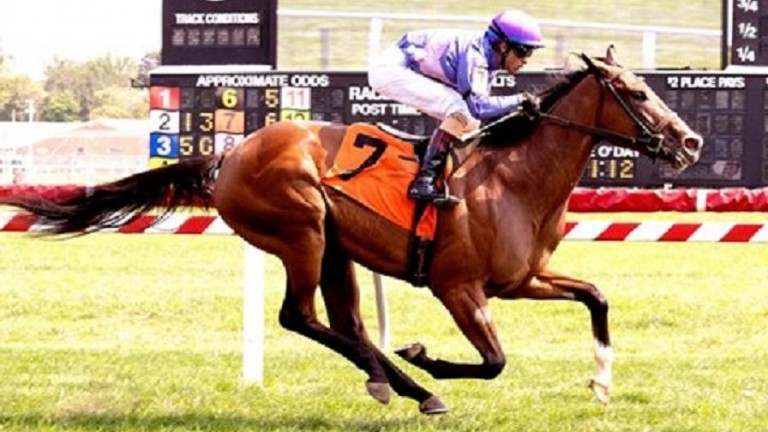 The offspring of Justify have found fast success on the grass, a surface the undefeated Triple Crown champ never set foot on in any of his six starts.

Justify, responsible for 13 two-year-old winners from his first crop to date, boasts four individual winners on the lawn. The son of Scat Daddy has caused quite the stir in Europe, with two of his offspring, Statuette and Aspen Grove, landing the Group 2 Airlie Stud Stakes and Group 3 Newtownanner Stud Irish EBF Stakes respectively at the Curragh.

"Justify is doing fantastic," said McDiarmid. "Of course, we wanted to be his first winner for him, but we decided to give our filly more time. She wasn't broken until January of this year.

"How Lovely is bred to go on the grass. However, she works very well on the dirt too. We thought we'd run her on the grass this time to give her one race on it, but after looking at her yesterday, I don't think we'd change anything. I think she liked the grass yesterday a lot."

Audley Farm purchased How Lovely's dam, Foreign Affair, in foal to Justify at the 2019 Fasig-Tipton Kentucky Fall Mixed Sale for $385,000.

The mare's youngest offspring, a weanling colt by Not This Time, is slated to go through the ring at the upcoming Keeneland November Sale. Foreign Affair is in foal to Practical Joke, but McDiarmid indicated there is a strong possibility that she will be sent back to Justify in 2023.

"We loved the mating when we bought the mare, so it's really exciting when it comes to fruition," said McDiarmid.

Audley Farm, the breeders of Grade 1 winner Bodemeister, has only three horses in training, all with Fair Hill Training Center-based conditioner Arnaud Delacour.

"They're three two-year-olds," said McDiarmid. "It's quite exciting. And they all went up to Arnaud's together and have trained together, which is great. So hopefully we'll have another few runners in the not-so-far future."

As for How Lovely's future, McDiarmid laughed and said that responsibility is in the capable hands of Delacour.

"He's a very good trainer," he said. "We've had horses with him for the past ten years. He does a wonderful job with this filly."

For all the racing and bloodstock news in North America, visit Bloodhorse

FIRST PUBLISHED 10:56AM, SEP 19 2022
I haven't seen her in maybe three months, and in the last three months she has just done so well and she looked incredible

Platinum Queen the jewel in the crown for Tally-Ho Stud Coolmore's buying strategy and the young sires on fire among Orby hot topics Watch seven-year-old son of Kitten's Joy win same Group 1 as his dam 20 years on 'Is a Classic-winning owner set to make a big re-entry into the racing scene?' Former Tate-trained son of Dark Angel dead-heats for Group 1 down under Lezoo allows Zoustar to stand out from the crowd while Sioux Nation marches on