Smart broodmare Wahgah the pick of the Derrinstown Stud draft

Gerry Aherne snaps up the daughter of Distorted Humor for €50,000 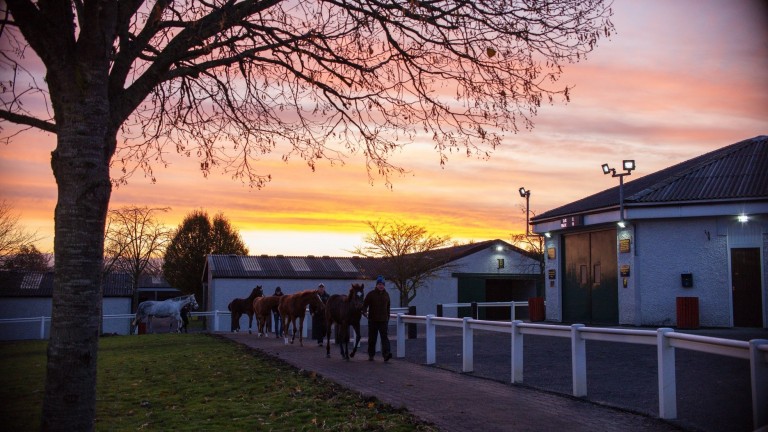 Derrinstown Stud’s draft of mares at the Tattersalls Ireland Flat Foal and Breeding Stock Sale can always be relied upon to warm up a cold November day at the sales, and so it proved on Saturday with the top three prices given for members of the 2019 draft.

Gerry Aherne, acting on behalf of an Irish client, went to €50,000 to secure the Listed Pride Stakes third Wahgah, an eight-year-old daughter of Distorted Humor.

She was offered in foal to Mukhadram, the sire of her first runner and winner, the two-year-old filly Tadreej, who took a seven furlong maiden last month for Godolphin.

"She will stay in Ireland," Aherne confirmed. "She's by a good broodmare sire and is well-bred from a good farm. She is a young mare who has already bred a winner."

New top price @tatts_ireland is @Derrinstown Lot 183 a daughter of Distorted Humor in foal to @ShadwellStud Mukhadram, the sire of her 1st runner and winner 2yo filly Tadreej. She was purchased for €50,009 by Gerry Aherne on behalf of an Irish client. pic.twitter.com/dgmLJKOyCH

Buroog, a five-year-old unraced daughter of Invincible Spirit and the Group 3 Albany Stakes winner Habaayib, made €30,000 to Maurice Burns of Rathasker Stud, who was bidding on behalf of a client.

Offered in foal to Iffraaj on an early March covering, the mare has a filly foal by Helmet that was retained by Derrinstown.

"She is for a client who sold some horses well during the year and was looking to buy a mare," said Burns. "She is in foal to a sexy stallion on an early covering and it’s a very nice family - there is a lot to like. She will be visiting one of the Rathasker stallions in the spring."

Buroog’s third dam is the Grade 2 Adirondack Stakes winner Salty Perfume, who is a half- sister to Green Perfume, German champion two-year-old and second in both the Middle Park and Dewhurst Stakes.

Derrinstown offered six in-foal mares who sold for an average of €21,167.

Apart from the Derrinstown draft, excitement was provided by Ballywalter Farm’s draft of mares. Cosmodrome, a winner of the Listed Height Of Fashion Stakes for Luca Cumani during her racing days, is the dam of winning fillies Lovell by Dubawi and Snax by High Chaparral.

Offered in foal to 2,000 Guineas and Vertem Futurity Stakes winner Saxon Warrior, she was knocked down to Kill Bloodstock for €30,000. Cosmodrome is a 15-year-old Bahri half-sister to Listed Ballymacoll Stakes winner Splashdown, the dam of Group 3 Solario Stakes winner Aktabantay.

The transaction that brought the highest price for a foal happened outside the ring with Razza del Velino, breeders of the star-crossed Sea Of Class, purchasing Kilmaglish House Stud’s colt by Kodiac for €24,000 privately.

Adaay’s first crop really impressed at the yearling sales and the only foal from his second crop offered for sale on Saturday achieved the highest price for a foal in the ring. Lot 19, consigned by Church View Stables, reached €19,000.

The colt is the first foal of Glacier Point, a winning daughter of Foxwedge, and she is a half-sister to Streamline by Whitsbury Manor Stud’s exciting first-season sire Due Diligence, and the winner of this season’s Group 3 Sirenia Stakes for trainer Clive Cox.

The sale offered the first opportunity for buyers to get their hands on foals by a number of this season’s first crop sires. El Kabeir, Yeomanstown Stud’s son of Scat Daddy, was responsible for a colt foal who made €16,000 to Beechvale Stud.

Lot 21 was consigned by Charel Park Stud and his second dam is a half-sister to Group 2 winner and Group 1 Dubai Duty Free and Singapore International second Bankable, and the Group 3 Grand Prix de Vichy winner Cheshire.

Cotai Glory, winner of the Molecomb Stakes and World Trophy, who was placed in both the King’s Stand and Nunthorpe Stakes, is a son of Exceed And Excel and stands at Tally Ho Stud, buyers of his most expensive foal today.

Lot 94 was consigned by Owenstown Stud for breeder Kangyu International Racing and made €16,000. The colt is the second foal of the winning Kyllachy mare Star Of Malta and is from Normandie Stud’s family of Group 1 Coronation Stakes winner Fallen For You, dam of this season’s Group 2 Hungerford Stakes winner Glorious Journey.

Peter Nolan Bloodstock consigned a Cotai Glory grandson of Italian Grade 3 winner Shifting Place, from the family of Needwood Blade and Islay Mist, who made €13,000 to Ihor Andray Bloodstock.

A significantly reduced catalogue from that of 2018 managed to post improved results in a number of categories with the clearance rate improving by five points to 55 per cent.