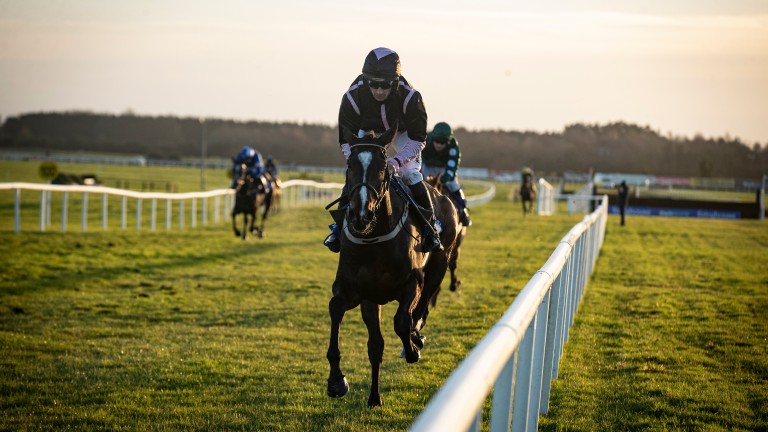 Brandy Love: the £200,000 purchase and point winner ran out an impressive winner of her bumper at Fairyhouse on Saturday
Patrick McCann
1 of 1
By Kitty Trice UPDATED 4:30PM, DEC 12 2020

Big spending owner Mike Grech's runners might have recently become familiar to followers of the Nicky Henderson yard, but he looks to have another exciting prospect in the Willie Mullins-trained Brandy Love.

An eight-length winner of her only point for Colin Bowe earlier this year, the four-year-old - who made £200,000 as the second most expensive lot when selling to Harold Kirk and Mullins at Tattersalls Cheltenham February HIT Sale - strolled to a seven-length victory over Presentingnewyork under Patrick Mullins.

The winning rider said: "She's very good, that's what she's shown at home and we thought she'd do that. She's a proper mare and those Jet Aways seem to be quite good. He seems to be siring plenty of winners and I think she'll keep his name in lights.

"I'd imagine she'll stay in bumpers and there's the mares' bumper at Leopardstown. She could also be a spring festival mare. It's great to get a winner for the owner."

By the fast-emerging Jet Away - Arctic Tack Stud's dual stakes-winning son of Cape Cross who has sired a number of eye-catching point winners - Brandy Love is out of the Sadler's Wells mare Bambootcha, a point winner herself and the scorer of three hurdle races.

Brandy Love makes a spectacular winning debut in the bumper for @WillieMullinsNH and Claudio Michael Grech @Fairyhouse the daughter of Jet Away was a £200,000 purchase at this year's #CheltenhamFebruary Sale from @colinboweracing pic.twitter.com/vs8of8zBDB

Now 19, Bambootcha has produced four winners to date, including the useful Nigel Twiston-Davies-trained Topofthecotswolds, a four-time winner under rules, and chase scorer Getaway Kid. She is also a half-sister to the useful Twiston-Davies chaser Lord Maizey.

Bred by Kieran Ryan and Tim Nolan, Brandy Love was shortened by some bookmakers for the Champion Bumper in March, while she looks likely to take a step up in grade next time out.

Grech, who formerly owned a number of jumpers in partnership with Stuart Parkin, has been buying again in his own right. Keskonrisk, purchased for £370,000 by Henrietta Knight, scored recently in his black and pink silks for Joseph O'Brien at Fairyhouse, while the Henderson-trained I Am Maximus obliged at Cheltenham in October.

FIRST PUBLISHED 4:18PM, DEC 12 2020
She's a proper mare and those Jet Aways seem to be quite good. He seems to be siring plenty of winners and I think she'll keep his name in lights