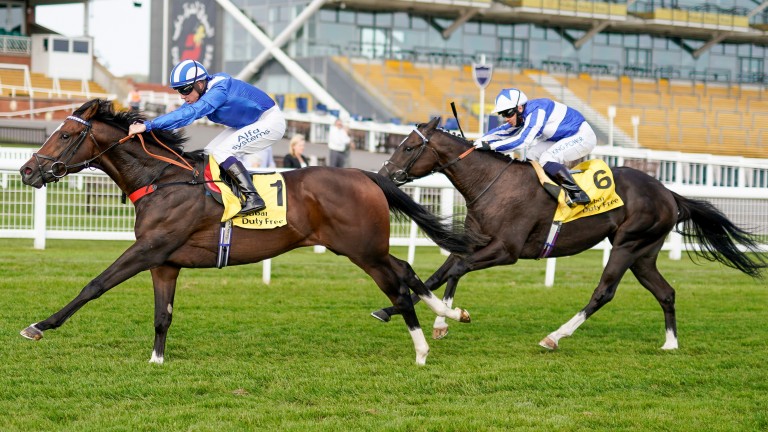 There were distinct shades of Mohaather at Newbury on Saturday as Alkumait, another Shadwell-owned son of Showcasing, stormed to success in the Group 2 Dubai Duty Free Mill Reef Stakes.

The two-year-old colt was bred by Whitsbury Manor Stud, the home of Showcasing and a near neighbour of trainer Marcus Tregoning, who has now saddled Alkumait to back-to-back victories.

The rangy bay is out of Suelita, a daughter of Dutch Art who won four races over five and six furlongs in Italy. Suelita fetched a mere 3,200gns from Bozzi Bloodstock when offered as a yearling at Tattersalls, and joined the Whitsbury Manor broodmare band at just 21,500gns when reoffered at the December Sales three years later.

However, despite those modest price tags, she has been a terrific servant to Whitsbury Manor, with Alkumait the latest star to emerge for a mare who has enjoyed a strong mix of racetrack and sales ring success.

Her first foal, the €7,000 yearling The Broghie Man, defied his own modest purchase price by winning the Listed Committed Stakes, while the Harper family's operation recouped their outlay in one fell swoop when her second foal, the winning and Listed-placed Gloves Lynch, fetched 52,000gns from Aidan O'Ryan and Gordon Elliott at Book 2 in 2017.

Then came her biggest sales ring strike when Cheveley Park Stud went to 425,000gns for Praised, a daughter of Pivotal who, coincidentally, opened her account at Redcar on Tuesday. 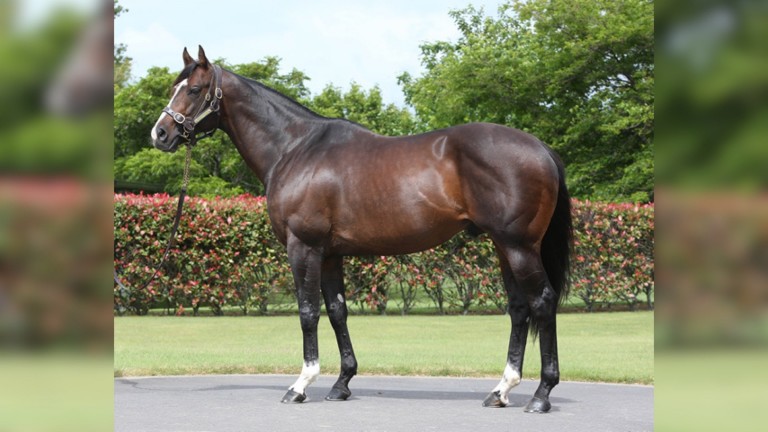 Alkumait is the fourth foal out of Suelita and he duly brought 150,000gns when pinhooked as a foal by West Park Farm at the December Sales in 2018. Reoffered through Baroda Stud at Book 1 last year, the colt turned a tidy profit when bought by Shadwell for 220,000gns.

Alkumait's success on Saturday will have doubtless enhanced the value of his yearling full-sister, who is due to come under the hammer as lot 469 at this year's Book 1 of the Tattersalls October Sale.

The colt's victory on Saturday took Showcasing's stud record to 91 stakes performers, a list that now includes 22 Group winners and the same number of Listed scorers. His roll of honour is headed by the Group 1-winning trio of Advertise, another Shadwell colour bearer in Mohaather and Quiet Reflection.

Showcasing, who stood the 2020 breeding season at a well deserved career-high fee of £55,000, has now sired two winners of the Mill Reef Stakes, following on from his first-crop son Toocoolforschool, who struck in 2014.

As well as the sister to Alkumait, the son of Oasis Dream has 15 other entries in this year's Book 1, including a sister to Tasleet, plus a further 31 lots in Book 2 and five in the Goffs Orby Sale.

Alkumait's victory caps a busy week for Whitsbury Manor Stud, as on Monday they announced Scat Daddy's son Sergei Prokofiev would be joining the stallion roster for 2021, while Jacques Prinsloo, a linchpin of the operation, was given the Stud Employee Award at the Thoroughbred Breeders' Association annual Flat awards ceremony on Thursday.