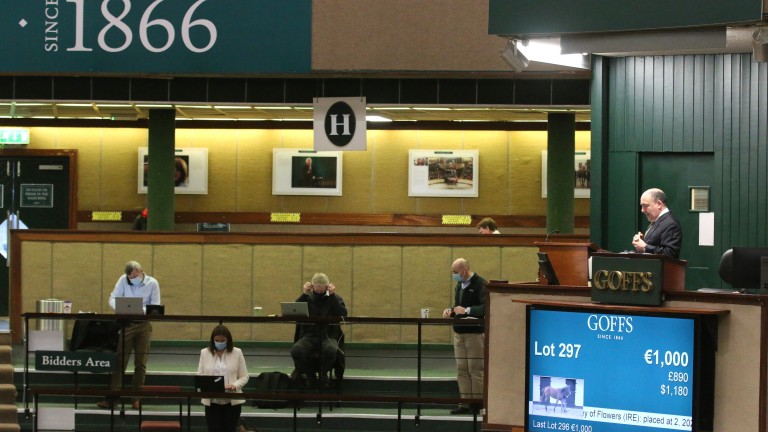 Online bidding has become a necessity in thoroughbred auctions over the last year
Goffs
1 of 1
By Tom Peacock 1:51PM, JUN 17 2021

Although one of Quick Suzy's owners had travelled all the way from California to see her claim Wednesday's Queen Mary Stakes, the fleet-footed filly was living proof that Royal Ascot winners can be bought without even leaving an office or sitting room.

Bought for just €20,000 last November by the Dunphy family and later sold on privately to the US-based Eclipse Thoroughbred Partners after she lost her maiden tag at the Curragh last month, Quick Suzy became the first Group winner to have been traded via Goffs' online platform as well providing a landmark moment for her first-season sire Profitable.

"Like all of the other sales companies, we were looking online at platforms and then Covid struck so we accelerated development and since last July, when we launched Goffs Online to support our rescheduled breeze-up sale in Doncaster, we've sold over 650 horses for over €10 million in some form or other online and we've sold them to 22 different countries," explained Goffs group chief executive Henry Beeby.

"It seems a phenomenon that has been there at exactly the time we needed it and has been embraced by everybody."

Quick Suzy was one of the joint-sixth most expensive lots at the Autumn Yearling Sale, which is nothing like as significant an event as the Orby or Tattersalls October Yearling Sale in terms of spending and had been forced into becoming a strictly online auction due to Irish restrictions. 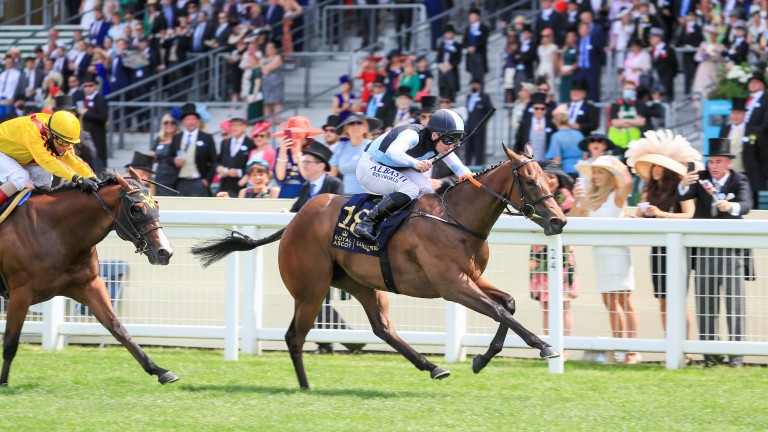 Although encouraged by trade at their inaugural such sale of horses in training a fortnight earlier, Beeby admitted surprise at the success of it.

"You'd have thought a yearling sale couldn't work online," he said. "We weren't going to hold that sale and then a number of vendors said, 'Just give us an online opportunity'. It went better than anybody expected it to and one of the horses is a Queen Mary winner, which is extraordinary really.

"At that sale the average was around €6,500 but interestingly it was up on the previous year, a 10 per cent rise on average and median online. It wasn't our first preference but it was what our clients wanted and we had a bit of telephone activity as well."

Sales companies will undoubtedly hope that such auctions, with no horses present and essentially just an auctioneer talking over videos beamed to the outside world, will soon become a curiosity from the past but Beeby believes the bidding technology is here to stay.

"You'd always want horses to be on site so people can inspect them but through the pandemic when things were impossible it has been absolutely vital to keep the wheels turning," he said.

"I think even when travel restrictions are lifted, hopefully relatively soon, we'll continue to have Goffs Online backing up our normal service. If there's a buyer who can't come, maybe has their agent looking at the horses and wants to bid themselves, they can do that, and so can the person who's tight for time and can't spend the full sale time here.

"From a Goffs point of view Michael Orton, who is part of our marketing team, is the expert and he has done a lot of the work. He's had lots of input from colleagues but really without him we'd have been lost. The feedback is that it's very easy to use and, touch wood, has been relatively trouble and glitch free."

He concluded: "Ten years ago, it probably would have been impossible. Certainly 20 years ago, we'd have just had to do without it.

"Obviously the owners weren't the original buyer but it just demonstrates that you can source a winner anywhere and the option has absolutely come into its own. I think it'll last forever, really, as an addition and an assistance."

FIRST PUBLISHED 1:51PM, JUN 17 2021
It just demonstrates that you can source a winner anywhere and the option has absolutely come into its own