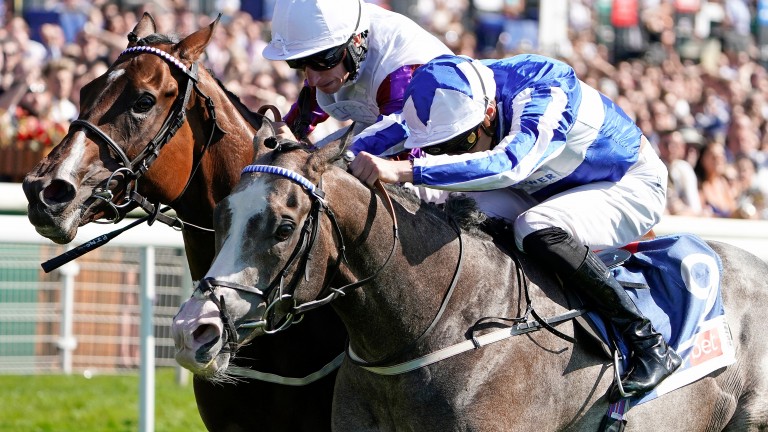 Shine So Bright, whose career highlight came when he held on gamely to beat Laurens by a nose in the Group 2 City of York Stakes, has been retired from racing to stand at stud in India.

The son of Oasis Dream was bred by Kirsten Rausing out of Alla Speranza, a daughter of her stallion Sir Percy who was a Group 3 winner herself on the track in the Kilternan Stakes at Leopardstown.

The mare has also produced the Listed-placed winner Amboseli, to Kingman, and Atlantis, by Sea The Stars and a winner at Doncaster in the summer.

Her most recent runner, the juvenile Alba Longa, showed some promise in three maiden outings this autumn.

Shine So Bright went through the ring three times, first as a foal at Tattersalls December, where he was picked up for 57,000gns by Rathasker Stud.

However, when offered again as a yearling at Goffs Orby, Aidan O'Ryan and Nick Bradley were able to acquire him for €27,000.

His first two runs were for Karl Burke, for whom he won a maiden and then finished a decent fifth behind Calyx in the Coventry Stakes.

The day before he ran in the Coventry, SackvilleDonald, acting for King Power Racing, shelled out £375,000 for him at the Goffs London Sale.

After the royal meeting he was switched to the yard of Andrew Balding, and the now six-year-old proved a fine servant, winning a further four times - three at Newmarket in addition to his York Group 2 victory - and regularly being in the money in stakes contests.

Revealing the news of his acquisition for stallion duties at Track Supreme Stud, Hinmat Singh Dhillon said: "He set a new track record for seven furlongs in 1.21 flat when winning the City of York Stakes, beating six-time Group 1 winner Laurens.

"He also won the Listed European Free Handicap, beating Space Traveller, and gave a good account of himself while setting the pace in the 2,000 Guineas, fading only in the final furlong.

"He also placed in the Mill Reef Stakes and the Gimcrack Stakes as a two-year-old. He beat several Group 1 winners over a racing career spanning four years."

He added: "He sold for £375,000gns as a two-year-old in training and comes from the famed Kirsten Rausing family of Albanova, Alborada, Alpinista, etc. which traces to Lady Josephine through Mumtaz Mahal."

News from the Goffs November Sale: