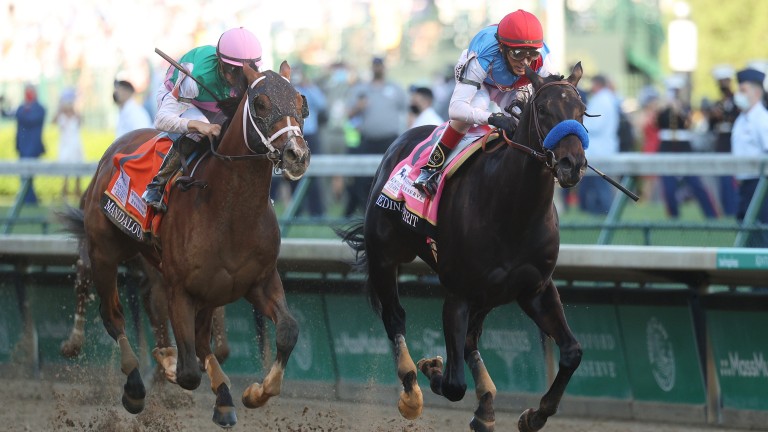 Bob Baffert is Kentucky Derby royalty after claiming the race for a record seventh time on Saturday but the background of his winner Medina Spirit is considerably more humble.

The first time the colt was sent into the ring as a yearling, he was bought with a single basement bid of $1,000 as an offering with little pedigree by a stallion in Protonico who not only produced a negligible first crop but was standing this year for just five times that price.

Medina Spirit was pinhooked by Christy Whitman and brought back to Ocala as a breeze-up prospect last July, where he was bought by agent Gary Young for a still comparatively meagre $35,000 on behalf of Amr Zedan's Zedan Racing Stables.

Sent to Bob Baffert, he won his only start at two and was on the board again this January in the Grade 3 Robert B Lewis Stakes, taking second in the San Felipe and the Santa Anita Derby, before his gallant front-running effort under John Velazquez in the Churchill Downs main event.

It surely heralds a considerable hike above $5,000 for Protonico, who stands at Castleton Lyons Farm in Kentucky and is thought to have just 21 foals from his maiden offering.

Second in the Grade 1 Clark Handicap over nine furlongs, Protonico was a winner of the Grade 2 Alysheba at this same course six years ago.

The son of Giant's Causeway was owned and bred by Oussama Aboughazale and it was his friendship with Zedan, a businessman based in the US and Saudi Arabia, which led to the purchase coming about.

Zedan is an expanding new owner in the sport and paid considerably more for the $1,350,000 Princess Noor, a subsequent Grade 1 winner, at OBS a month earlier.

"We were done shopping per se during the auction and then Mr Aboughazale calls me and says, 'Well, there's this horse by Protonico, I own the sire, and would you want to check him out?' I said, 'Absolutely'," Zedan explained in the Derby press conference.

"So I checked him out and I liked him. I called Gary. I said, 'Gary, what do you think?' Let's run it by Bob. Bob gave the okay. So we looked at him, agreed everything was fine."

Zedan had been overseas and just about to jump in the shower before Medina Spirit took his turn to be sold.

"Gary calls me literally two minutes later, says, 'Sir, he's going in the ring right now'. Good thing I kept my phone right next to me. I said, 'Yeah, let's do it'. And the rest is history. We just bought him and here we are."

Baffert explained that Medina Spirit had stood out against more blue-blooded inmates in his California stable.

"The good ones, they tip you off. So he was one of our good ones," he said.

"Same thing happened with [last year's winner] Authentic. We had all these other good ones. But if they're good in the Bob Baffert barn, they're pretty good, you know? So we compare them with our other horses. So he was always one of the top horses.

"This happened with Real Quiet (1998 winner). He cost only $17,000. Real Quiet never really got the respect because they look at the price. This horse, he was by Protonico, who was a good horse."

The result also concludes a tale worthy of a glitzy sporting documentary remake for Gail Rice, Medina Spirit's breeder. Her ex-husband Wayne bought the dam Mongolian Changa for just $9,000 and won a minor race at Presque Isle Downs with her before she was retired from injury as a two-year-old.

"She was big and beautiful - not a lot of black type on her page - but I knew I could breed racehorses out of her," Rice told BloodHorse.

Medina Spirit was the only foal that Mongolian Changa has produced and it was woeful luck for Rice as she actually gave the mare away. She was reportedly going through her divorce and had to trim her breeding interests, plumping for Scribbling Sarah, dam of last year's Ashland Stakes winner Speech.

"I really could afford to keep only one horse and that was Scribbling Sarah," continued Rice, who has no hard feelings about it all.

"I got my dream," she said. "Last year I had Speech in the [Kentucky] Oaks, but this is the race. I'm so happy that I touched him for the first eight to nine months of his life. He came off of my farm, out of my mare...it is the stuff you only hear about. It's like, wow!"

Mongolian Changa ended up being bought by clients with the Taylor Made operation and is currently in foal to Not This Time.

Another Jim Bolger masterclass as Poetic Flare lands the Guineas

FIRST PUBLISHED 10:23AM, MAY 2 2021
Real Quiet never really got the respect because they look at the price. This horse, he was by Protonico, who was a good horse