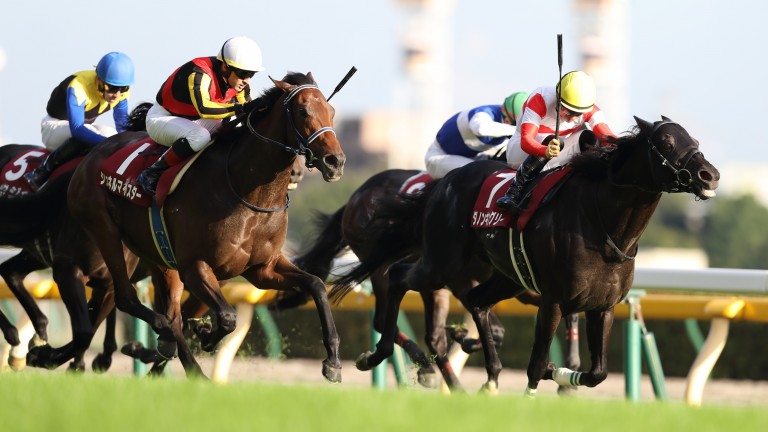 Kingman's German-bred colt Schnell Meister is on course for the Group 1 Mile Championship next month after mowing down Danon Kingly to claim the Group 2 Mainichi Okan at Tokyo.

Already a top-level winner for the Banstead Manor Stud sire, Schnell Meister, trained by Takahisa Tezuka and the mount of Christophe Lemaire, was settled second-last in the turf contest over a mile and a furlong until making a move on the home turn and storming home with a blistering turn of foot to catch Danon Kingly.

The runner-up, by Deep Impact, had moved up before the home turn and went to the front a furlong out, only to be collared and beaten a head. Potager was more than a length and a half back in third.

Schnell Meister, a three-year-old out of Soldier Hollow's Group 1-winning mare Serienholde - winner of the 2016 German Oaks - was landing his fourth race from six starts, including this year's NHK Mile Cup Group 1 win.

Lemaire said: "When Danon Kingly moved up, he didn't. I wanted to move but I respected his wishes. At the last turn, his response got better and he lengthened his stride well in the last furlong and a half.

"His engine started slowly in the NHK Mile Cup as well, but he powers it up. It was the first race after a rest so I didn't put pressure on him, but I might ride aggressively next time. Even if the distance is 2,000 metres (a mile and a quarter), it does not seem too long for him."

Trainer Tezuka added: "I thought he was settled too far from the leader so I didn't think he would catch the front-runners. He has surely grown up. I think Hanshin's one-turn course suits him."

Danon Kingly's rider Yuga Kawada said: "His condition was better than for the previous race, the Yasuda Kinen. It was our race to win but the winner was very strong."

Wining owners Sunday Racing Co Ltd announced they had entered Schnell Meister for the Hong Kong Mile in December, won last year by Golden Sixty, who is due to defend his crown, and will make a call after the Mile Championship on November 21.

Their Gran Alegria will run in the Tenno Sho Autumn on October 31, and she has been entered in the Hong Kong Cup and Mile. Similarly, a decision will be taken over the Sha Tin meeting after her next race in Japan.

Ubettabelieveit to stand at Mickley Stud in 2022

FIRST PUBLISHED 11:04AM, OCT 11 2021
At the last turn, his response got better and he lengthened his stride well in the last furlong and a half