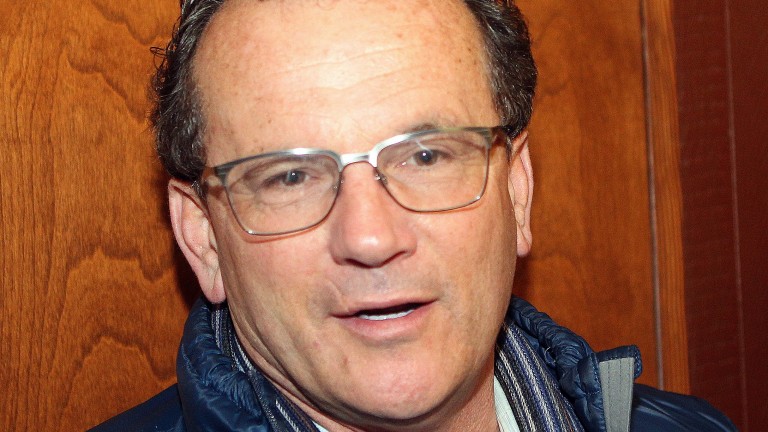 John Sikura is thrilled with his new premises in Bourbon County
Keeneland Photos
1 of 1
By Michele MacDonald 11:16AM, NOV 7 2019

When Hill ‘n’ Dale Farms owner John Sikura bought two mares and two weanlings for a total of $4.8 million to lead buyers during Wednesday’s opening session of the Keeneland November sale, he served notice that he is taking his Kentucky breeding business to a new level.

Sikura signed the tickets for champion Take Charge Brandi, the $3.2 million session topper, and his other purchases as "Hill ‘n’ Dale at Xalapa," the first public sign of what already seems to be a significant expansion.

"It was kind of spur of the moment, but I thought that might be the best way to say it,” Sikura said of using the names of both Hill ‘n’ Dale and his new farm acquisition, Xalapa, a historic and picturesque property near Paris in Bourbon County.

"It’s in the formative stages, but we’re going to incorporate both farms and both names together," he said, adding that he wants to have "all options open" for Xalapa in the future, including the possibility of standing stallions there.

"To me, it’s the most unique property I’ve ever set foot on. It’s an enchanting place. The plan is, as we can, to fully develop it as an ongoing, achieving equine enterprise with respect to all the history of the past and keeping the feel of a great estate as well as modernising and making it efficient and bringing some of the land into play that is sort of wild and not serviceable.

"We’ve been at it for about six months now. It’s probably a lifetime project, but I love land and farms and planning, so it’s a labour of love. As soon as this sale is done, I’ll have my boots on and be back to work.”

Originally founded in 1827, Xalapa sprawls over nearly 1,100 acres and includes unique features such as a stone bridge that was featured in scenes of the movie Seabiscuit and a Tudor-style water tower made of native limestone.

Curlin is Hill 'n' Dale's leading man, and John Sikura is not ruling out having stallions at his new property
Michele MacDonald

The land has been home to notable thoroughbreds such as St Leger winner Prince Palatine, who stood at Xalapa after being acquired in 1920 by then farm owner Edward Francis Simms, who for a time was regarded as one of the most influential commercial breeders in America. Prince Palatine’s offspring included his daughter Blue Glass, who produced Unbreakable, sire of Polynesian and grandsire of Native Dancer.

In the early 2000s, fourth generation Simms family members Dr Emler and Celeste Neuman operated Xalapa as a boarding facility prior to the farm being offered for sale.

Xalapa lies about three miles from Godolphin’s Stonerside Farm division and about five miles from Arthur Hancock’s Stone Farm and Frank Stronach’s Adena Springs. Claiborne Farm is about eight miles away, while Hill ‘n’ Dale, which covers about 1,300 acres in Fayette County, is approximately 32 miles distant.

Sikura has spent significant time and resources restoring original stone fences on the Hill ‘n’ Dale property, which was previously the North Ridge Farm managed by the late Dr Michael Osborne prior to his involvement with Sheikh Mohammed and racing in Dubai.

When Xalapa was on the market, real estate promotional materials described the farm as "one of the most stunning and beautiful estates in Kentucky". Facilities listed included an updated main residence built in 1827, a log house, five barns including training and broodmare barns and small stallion barn, 20 paddocks, and a training track.