Horses who race as juveniles are less at risk of injury, research claims 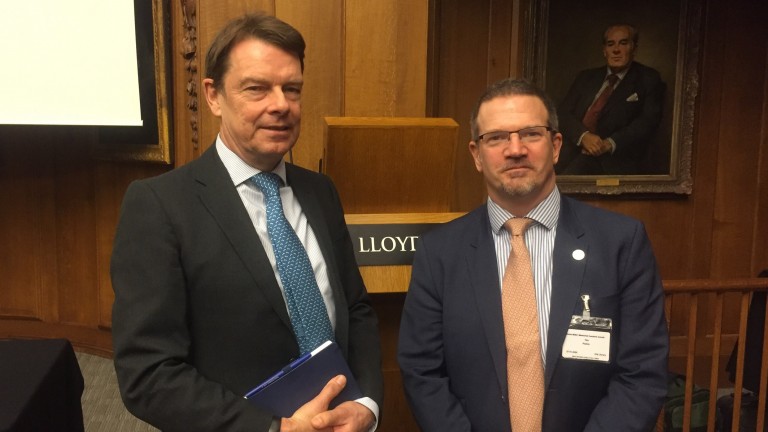 Horses campaigned as juveniles are at less risk of injury than their older counterparts, according to data presented during a Nick Mills' Memorial Lecture given by researcher Tim Parkin in the Old Library at Lloyd's of London on Monday.

Parkin, who is professor of veterinary epidemiology at the University of Glasgow, gave his keynote address on predicting risk during racing and equestrian sports from a veterinary perspective, and spoke about how the sport is using readily available data to help prevent injuries in racehorses.

Acknowledging the make-up of the audience – many of whom have a keen interest in bloodstock – Parkin tailored his speech to the thoroughbred industry and the measures being taken to identify racehorses that are most at risk through data, analysis and communication.

Among his findings is that horses who have been campaigned as juveniles are less likely than their older counterparts to sustain career-ending injuries.

Parkin, who has worked in his chosen field for more than 20 years, posited that the skeletal strength of horses raced at two helps prevent injuries at a later stage.

Switching trainers also leads to a slight increase in the chances of a horse suffering a career-ending injury on their next start, with horses changing hands in the lower rungs of United States claiming races at significant risk.

Entire horses also have a slightly higher risk of incurring career-ending injuries than female horses or geldings, as well as horses running in 'off' dirt conditions in the US, when the ground is not described as fast.

Horses transferring from the Flat to National Hunt also presented with fewer injuries than those sent straight over jumps, with Parkin suggesting National Hunt trainers should give their charges plenty of work at home before sending them over obstacles.

Improving on a very good "null" model was another challenge facing data researchers, with approximately ten in every 10,000 starts in Britain and Ireland resulting in a fatal injury.

Taking drastic measures to affect change is not the solution, says Parkin, as racehorses will not suffer a fatal injury in 99.9 per cent of all starts.

Parkin looked at predictive risk thresholds, suggesting eliminating all runners with a five per cent greater risk of injury than other racehorses would have the knock-on effect of eliminating a significant number of horses who would race free from injury.

Noting a decrease in the percentage of fatal injuries in the US in recent years, Parkin pointed to factors such as horses being prepared earlier on as two-year-olds, horses staying with the same trainers for longer, horses being raced less intensively, and a reduction in the number of races over sprint distances.

Regulation changes, particularly those relating to medication, may also have had a significant impact, while Parkin said better training and veterinary information could lead to improved assessment of risk.

Hong Kong was cited as one of the only jurisdictions with veterinary data available for all its competitors, though due to strict import protocols, most of the racehorse population there is healthy to begin with.

Parkin called for an altruistic approach whereby training and veterinary data is made available for data research, suggesting it could help further reduce the risk of injuries in racehorses, which in turn would benefit the sport as a whole.

He rounded off his speech by saying that while all measures were being taken to reduce the risk of injury in racehorses, the sport cannot be complacent, with the US in particular in the spotlight.

Much of Parkin's research data was sourced in collaboration with the US Jockey Club, with the data set incorporating 180,000 horses and 4.5 million race starts, as well as six million sets of training data.

The data was originally compiled after the 2006 Kentucky Derby hero Barbaro suffered serious fractures to his right hind leg in the Preakness Stakes, which led to much negative publicity for the sport.

The event was chaired by David Ashby, chief executive of the newly formed David Ashby Underwriting, and among those in attendance were members of Mills' family and a number of former speakers.

Mills built long-standing friendships within the insurance market, including with many underwriters and brokers at Lloyd's, and was fondly remembered for lending his knowledge to the industry.

'Thrilled' - Palin leaves Arqana with big dreams after securing Almanzor colt 'Night Of Thunder is very much a horse to target to buy yearlings by' Party host and winning breeder, it was a big weekend for Gerhard Schoeningh 'It's more what you can get your hands on' - Star Bloodstock on the Arqana mark 'They've got fast pedigrees and they're both by very good sires' 'That price was over my expectations' - €1.6m Shamardal colt leads way at Arqana