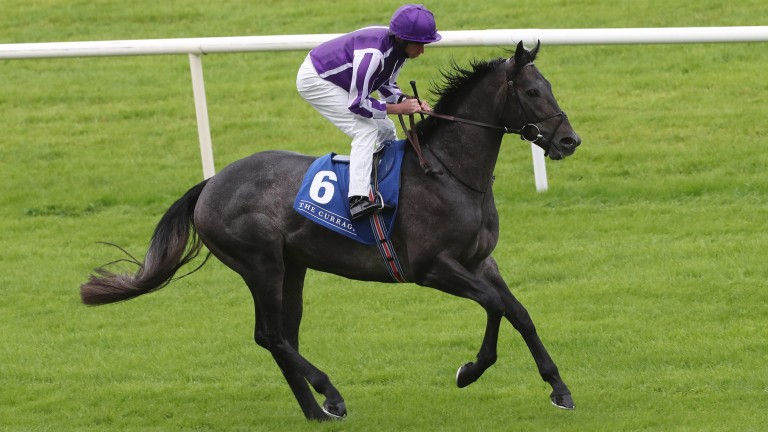 Hong Kong, pictured earlier in the season, has a stallion's pedigree
Caroline Norris
1 of 1
By Martin Stevens 5:33PM, OCT 20 2019

Hong Kong started to live up to his prestigious pedigree and punchy price-tag with a decisive victory on his fourth start in a six-furlong maiden on testing going at Naas on Sunday.

The grey colt, trained by Aidan O'Brien for Coolmore partners, was always travelling strongly at the head of affairs and was put to work by Donnacha O'Brien just over a furlong from home.

Sporting first-time blinkers, he kept on well to repel the late challenges of Johan Zoffani, a Michael O'Callaghan-trained son of Zoffany beaten one and a half lengths into second, and Nullifier, Ger Lyons' No Nay Never colt a further two lengths back in third.

Aidan O'Brien reported after the race: “He was very lazy the last day and the blinkers helped him to concentrate. Donnacha said when he got confident today that he really stretched.

“He travelled well today and he'll be a lovely three-year-old. I'd say he'll get a mile and I'd be surprised if he doesn't get it next year. You would like the way he ran with his head down today, and straight.”

First signs of serious talent from Hong Kong will be a relief to connections as, being in possession of a stallion's pedigree, he was bought by MV Magnier for $1 million as a short yearling at last year's Keeneland January Sale.

He becomes the 17th individual winner for champion two-year-old turned Triple Crown and Breeders' Cup Classic hero American Pharoah, who stood at Coolmore's Ashford Stud in Kentucky this year at a private fee.

The son of Pioneerof The Nile has also been represented by two runners-up in Group/Grade 1 company – Monarch Of Egypt, who found only Siskin too good in the Phoenix Stakes, and American Theorem, who nearly read the script in the American Pharoah Stakes but was defeated by the exciting Eight Rings.

Hong Kong has considerable pedigree appeal in his maternal family too.

He was bred by Windmill Manor Farms and partners out of the stakes-winning Holy Bull mare Mekko Hokte, making him a half-brother to Coventry Stakes and Commonwealth Cup victor Caravaggio, who covered his second book of mares at Coolmore's base in County Tipperary this year.

Mekko Hokte, who hails from the family of Group/Grade 1 winners Bien Bien, Foundry, Oh Susanna, Sharp Lisa and Spring At Last, has also produced Grade 2 Gallant Bloom Handicap winner My Jen, who in turn is the dam of this season's high-class Japanese two-year-old Satono Gold.

FIRST PUBLISHED 5:33PM, OCT 20 2019
He travelled well today and he'll be a lovely three-year-old. I'd say he'll get a mile and I'd be surprised if he doesn't get it next year