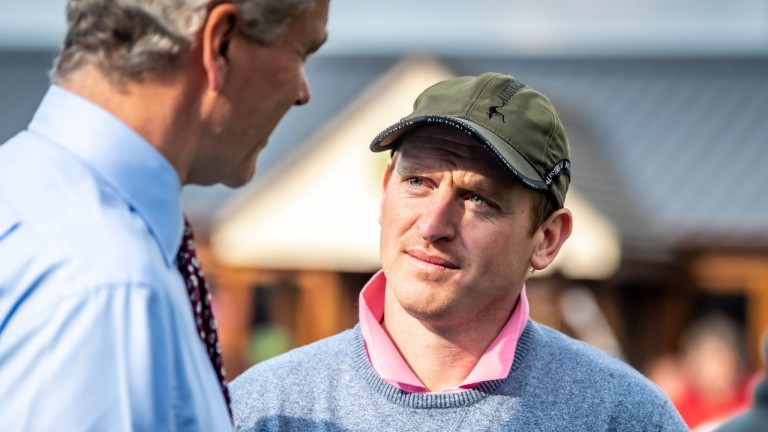 Classic Getaway heads a classy 38-lot catalogue for the Goffs UK December Point-to-Point Sale at Yorton Farm on Thursday, with the promising four-year-old one of 21 winners between the flags due to come under the hammer at the historic Leighton stud.

Donnchadh Doyle's son of Getaway (Lot 7) has been the subject of plenty of chat since he created a deep impression when winning a Borris House maiden in little more than a common canter in late November.

A scopey individual with plenty of size, Classic Getaway could be spotted jumping well and travelling with zest from some way out, and having hit the front with another slick jump at the fourth-last he proceeded to put his rivals to the sword.

A nonchalant look over the shoulder before two out confirmed his Cheltenham Festival-winning rider Rob James had plenty of horse under him and he duly went on to score by eight lengths without so much as coming off the bridle.

"He's a very nice horse, a very good-looking horse too, and he won very well," said Doyle. "Hopefully everything goes well at the sale on Thursday. His work at home had been very exciting so I was just hoping he'd go and do what we thought he could do and thankfully he did.

"He jumped awesome and travelled lovely and he looks very exciting for the future. Whoever gets him will be very lucky."

The 4YO son of GETAWAY made an impressive @irishp2p debut winning by 8 lengths with jockey @robjames86 describing the horse as one of the best 4YOs he has ridden.

Offered at the select December P2P Sale by @MonbegStables.

Doyle, who sits second to Colin Bowe in the Irish point-to-point trainers table, has a formidable team of four-year-olds stabled at his Wexford base, and when asked how highly Classic Getaway ranks among his current squad, he said: "He'd be the best of them so far anyway, he just looks all class.

Classic Getaway has already been to the sales on two previous occasions, having gone to Brendan Bashford at £24,000 when consigned by Trickledown Stud as a yearling before Ballincurrig House Stud presented him at the Goffs UK Spring Store Sale, where he joined the Monbeg Stables fold at £65,000.

"He was a gorgeous big black horse with a very good action," recalled Doyle. "I was after having a bit of luck with Getaway the previous year so he fitted in lovely with us. We gave plenty of money on the day for him but it looks like it's worked out nicely so far anyway."

Doyle added: "It's great that we're at the sales now. There was plenty of money for the nice ones at Newmarket last week so hopefully that'll keep going into the new year and we can rock on back to where we were."

The Monbeg Stables maestro will be hoping that Classic Getaway can emulate the success of his past graduates such as Holywell, Monbeg Dude, The Worlds End, The Last Samuri, Topofthegame and the emerging talents like Bravemansgame and The Big Breakaway.

Other eyecatching Irish maiden winners on offer include: Ottoman Style (5), a Kayf Tara half-brother to the Grade 3-winning Brahma Bull, who landed a Borris House maiden on debut by five lengths for Cormac Doyle; James Doyle's Tango Tara (12), who showed toughness and talent when he made a successful debut at Ballindenisk; My Mate Mozzie, the eight-length winner of a Tattersalls maiden for Mags Mullins (18); and Here Comes The Man, a son of Flemensfirth who looked a smart performer in the making when he ran out a wide-margin winner at Boulta on Sunday for Colin Bowe (32).

The boutique auction begins at 1pm on Thursday.

FIRST PUBLISHED 2:12PM, DEC 16 2020
Rob was very excited about him, I've never seen him as excited about a horse of mine before, he just said 'He's a proper one'