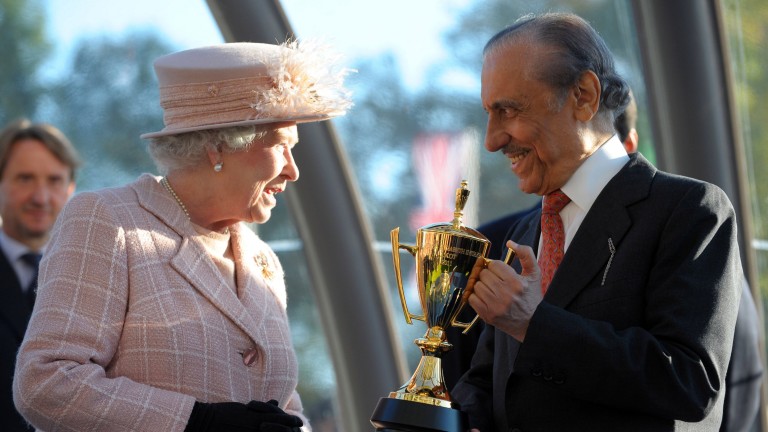 The bloodstock community worldwide has been paying its respects to the sport's most famous owner-breeder following her death aged 96 on Thursday.

Julian Richmond-Watson, chairman of the TBA, to whom the Queen had been patron since 1954, said: “Her Majesty The Queen’s outstanding contribution and service to the country and our industry is without parallel. Her knowledge and passion for the thoroughbred was well known and we were extremely fortunate to have such a longstanding patron who was truly an international ambassador for our sport.

"Our entire industry is indebted to her for her enduring support and involvement, and her loss will be felt acutely across our community."

A book of condolence will be available for members to sign in the TBA office at Stanstead House in Newmarket until October 14. 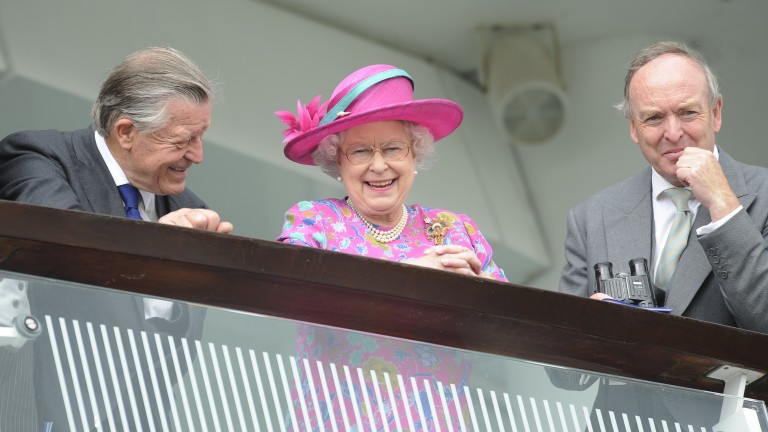 The NZTBA said: "The Queen was a passionate and enthusiastic horse breeder for over 70 years and has been the patron of the NZTBA since 1990. The NZTBA is the only horse-related organisation outside the United Kingdom patronised by the Queen and she maintained a close interest and relationship with the Association over those years.

"On her many visits to New Zealand, Her Majesty would always incorporate at least one race meeting and was a regular visitor to Cambridge Stud and other farms throughout the country."

A recognised need to invigorate the Royal Studs' bloodlines has been aided by regular gifts from Sheikh Mohammed and the Aga Khan, for example Derby third Carlton House, Gold Cup heroine Estimate and Listed winner Set To Music, while dual winner Mellow Yellow, who could be the next runner in the Queen’s silks at Kempton on Monday, was bred by Godolphin. 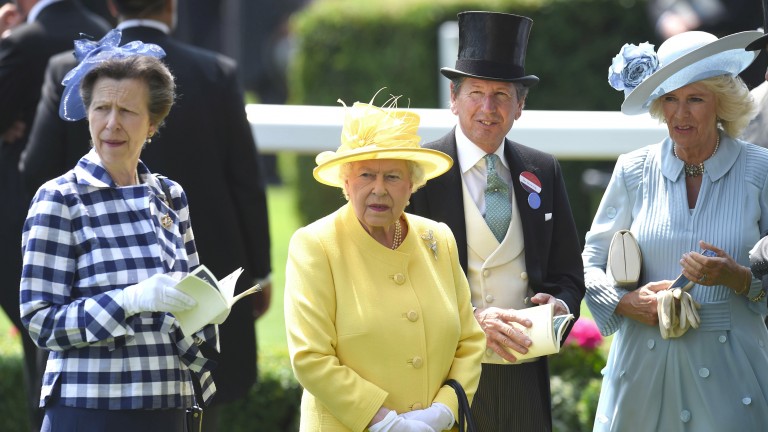 The Queen, joined by Princess Anne and the Duchess of Cornwall, in her element at Royal Ascot in 2017
Stuart C. Wilson

In 2011, the Queen made an official visit to the Irish National Stud and private trips to Coolmore and the Aga Khan’s Gilltown Stud, on her state visit to Ireland.

The Aga Khan Studs said: "Everyone here was deeply saddened following the death of Her Majesty The Queen.

"She shared with us a tremendous passion for the thoroughbred and many happy memories on the racecourse, not least Estimate’s great Gold Cup victory at Royal Ascot. It was also a pleasure to welcome her to our French studs during a visit in the 1980s and to Gilltown Stud during her trip to Ireland in 2011, where her knowledge and enthusiasm as a fellow owner-breeder was evident. We send our condolences to the royal family."

A statement from Darley read: "Everyone at Godolphin is deeply saddened by the news of the death of Her Majesty The Queen. She was an outstanding and devoted head of state who gave her entire life to the service of her country and the Commonwealth. She was also a horsewoman who loved the thoroughbred and our sport with a passion.

"She is an immeasurable loss to the United Kingdom and to our sport; our deepest condolences to the royal family and to the country."

One of the Queen’s best performers in recent years has been Frankel’s daughter Light Refrain, a Group 3 winner, and Juddmonte’s CEO Douglas Erskine Crum said: "Her Majesty The Queen and Prince Khalid bin Abdullah spent many happy hours over the years discussing racing and breeding. At Juddmonte we were honoured to welcome Her Majesty to Banstead Manor Stud on numerous occasions and many of the Queen’s mares to visit our stallions. 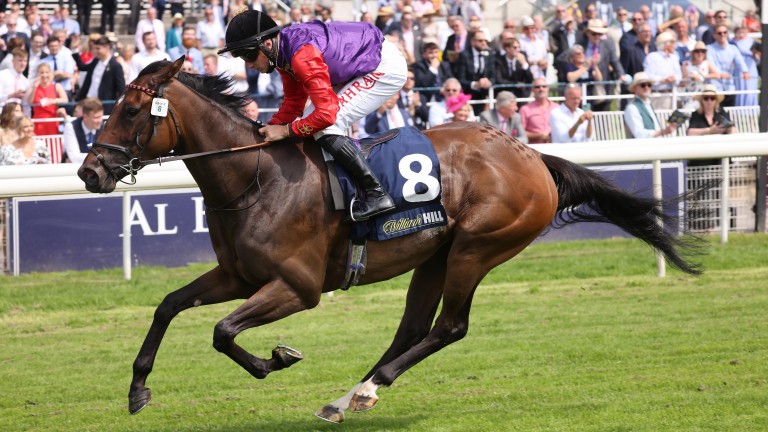 Light Refrain: one of the Queen's best performers in recent years and by Juddmonte's supersire Frankel
John Grossick (racingpost.com/photos)

"Her Majesty’s contribution to racing and to breeding was beyond measure. We are indeed privileged to have been a small part of it."

Recorder, like Light Refrain, was a Group 3 winner at York for the Queen, and has stood at Montfort et Preaux since his retirement.

The stud comes under the Sumbe banner, and they said: "The Sumbe team is deeply affected by the death of the Queen, a great lady of the horse who will have left an indelible mark in the equestrian world. Our condolences to the royal family, our friends in the UK and the Commonwealth."

Cheveley Park Stud, whose runners carry the famous red, white and blue silks of the Thompson family, said: "We wish to thank the Queen for her unwavering love, dedication and service. Her Majesty's passion for thoroughbreds was special and dearly treasured. A shining example to us all for over 70 years, how lucky we have been in every way. Our thoughts are very much with her family."

A statement from Shadwell read: "The death of Her Majesty The Queen has left a huge hole in the heart of the nation that she served so selflessly throughout her life. All of us at Shadwell share this deep sadness and sense of utter loss. Her love of the thoroughbred and passion for our sport will be missed beyond measure.

"We send our deepest sympathy to the royal family."

Weatherbys, which has maintained and published the General Stud Book since 1791, said: "We were incredibly fortunate to have a longstanding relationship with the Queen, as a result of her deep love of and support for racing and breeding over so many years. 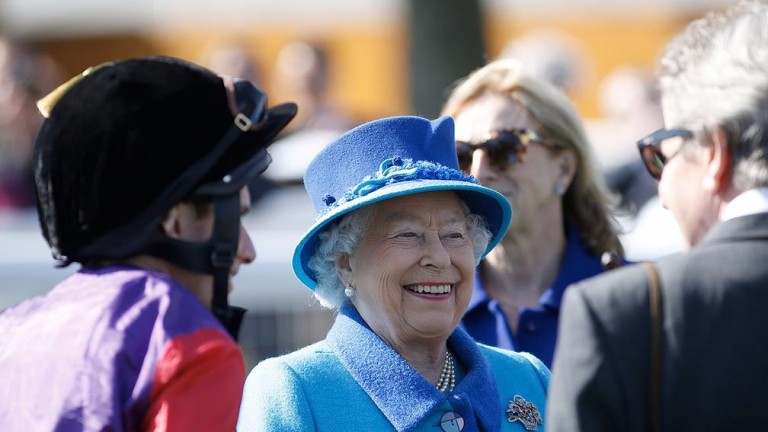 The Queen: "A beloved leader with exceptional integrity and an unmatched horsewoman."
Edward Whitaker (racingpost.com/photos)

"Her Majesty won the hearts, affection, respect and admiration from people of all ages and backgrounds throughout the world. We mourn the loss of the Queen, who devoted her life to our country and the Commonwealth."

Philip Freedman, chairman of the European Breeders' Fund, said: “The EBF joins the nation in mourning the loss of a much loved and respected monarch. Racing has lost its greatest supporter but her appreciation of the thoroughbred will always be remembered. Deepest condolences to His Majesty The King and the royal family.”

The world’s biggest yearling sale starts at Keeneland on Monday, and their president and CEO Shannon Arvin said: "Keeneland joins the world in mourning the loss of Queen Elizabeth II, a beloved leader with exceptional integrity and an unmatched horsewoman. Queen Elizabeth’s lifelong love for horses and her passion for racing left an indelible legacy on the sport around the world and at Keeneland.

"The Queen Elizabeth II Challenge Cup will be even more special this fall as we honour her memory and celebrate Her Majesty The Queen’s Platinum Jubilee. Keeneland extends its deepest condolences to her family and her country."

FIRST PUBLISHED 5:03PM, SEP 9 2022
Her Majesty won the hearts, affection, respect and admiration from people of all ages and backgrounds throughout the world