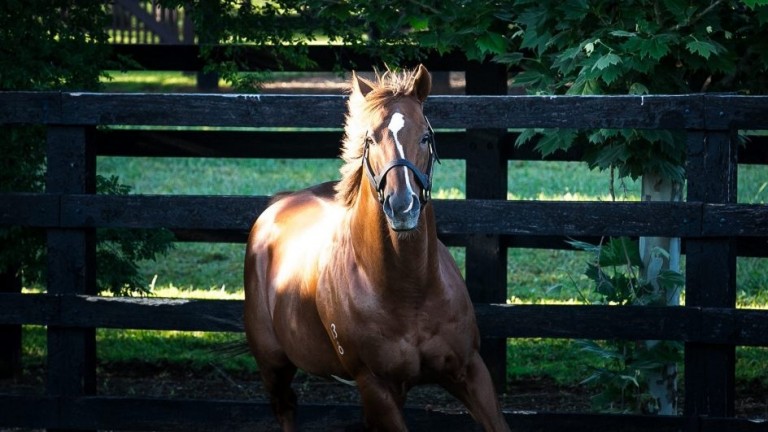 Starspangledbanner: supplied the winners of both juvenile Group races so far this season and is also the grandsire of Poule d'Essai des Pouliches scorer Coeursamba
Coolmore
1 of 1
By James Thomas UPDATED 6:06PM, JUN 13 2021

It has been 11 years since Starspangledbanner burst on to the European scene with a dazzling display of brazen speed in the Group 1 Golden Jubilee Stakes at Royal Ascot.

Four years later the Australian-bred son of Choisir once again made the royal meeting his own when his debut northern hemisphere-bred crop, which numbered just 33 foals, yielded Coventry Stakes hero The Wow Signal and Queen Mary victress Anthem Alexander.

Fertility issues saw to it that his trajectory since has been unconventional to say the least, having returned to training in 2012 and 2013 after his second crop of foals yielded just 11. During his second stint at Ballydoyle there was even talk of a gelding operation.

However, against all odds, Starspangledbanner's fertility began to improve while on duty at Rosemont Stud in Australia, and with his Royal Ascot heroics still ringing in breeders' ears, he made a belated return to Coolmore in 2016. 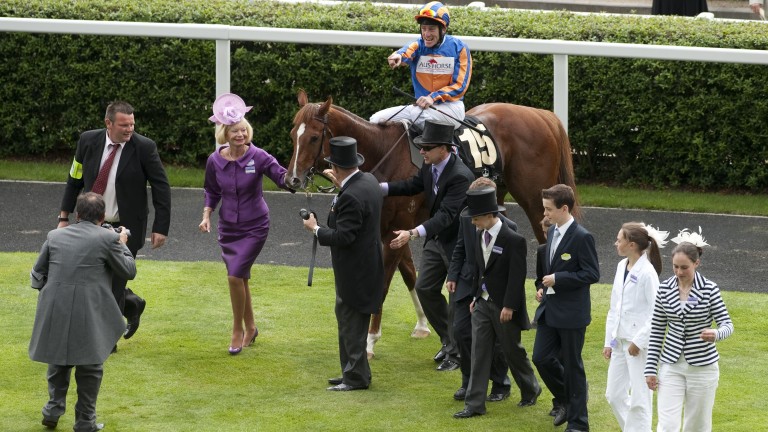 He has since sired much healthier numbers, with 71 foals resulting from his 2016 book and 76 more arriving the following year.

So far this year he has sired eight northern hemisphere two-year-old winners, supplied at a strike-rate of 38 per cent. Among that octet are the Fozzy Stack-trained Castle Star and Hermana Estrella, the winners of the only juvenile Group races this season, namely the Marble Hill Stakes and the Naas Juvenile Sprint. 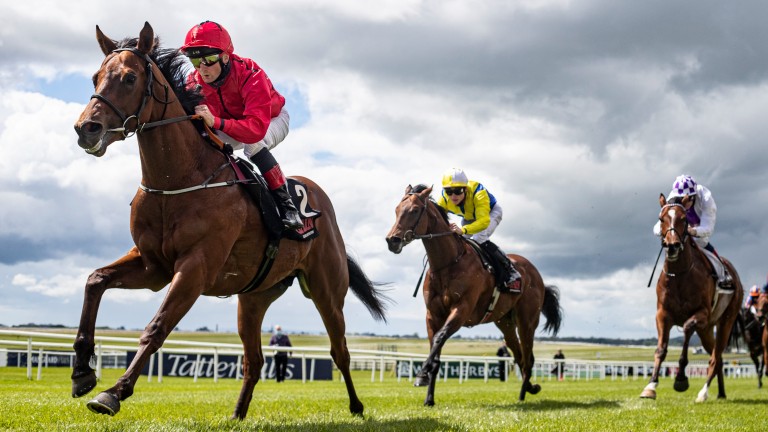 Among his other juvenile winners is Flotus, with the Simon and Ed Crisford-trained filly now the ante-post favourite for the Albany Stakes following a deeply impressive debut success at Goodwood.

Not only is Castle Star the joint highest-rated two-year-old this season with a Racing Post Rating of 104, his sire is also responsible for three of the top ten, with Hermana Estrella on a mark of 97 and Flotus on 95.

In truth, such a run of results was not entirely unpredictable as Starspangledbanner's current juvenile crop is by far his biggest. He has 87 two-year-olds to run for him this season, a marked contrast to the 44 he sired in his first two northern hemisphere crops combined.

"He has received great support from breeders in Ireland, the UK and wider Europe since his return," says Cathal Murphy of Coolmore's Castlehyde Stud, where Starspangledbanner is standing for €22,500 this year. "Working closely with the breeders, we have a system in place for managing him and, thankfully, his fertility is now very good.

"I have to pay tribute to the Stack family, who have played such a major role in his success. Liz Stack bred his first-crop Group 1 winner The Wow Signal and Fozzy obviously took note as together with Hubie de Burgh he has purchased Group winners Aloha Star and Hermana Estrella. 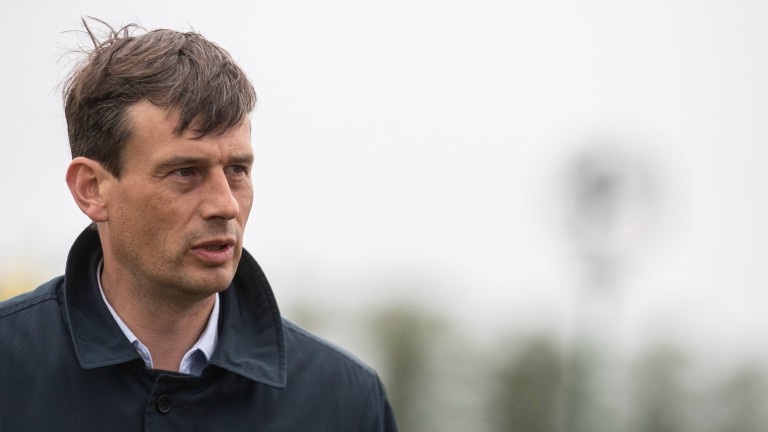 "He also trained Bubbles On Ice for his owner-breeder Michael Begley last year before she was sold to America, and is also responsible for Castle Star, who was owned and bred by Coolmore managers Tom Gaffney, Clem Murphy and David O'Loughlin."

Reflecting on Starspangledbanner's recent two-year-old success, Murphy adds: "To have the first two juvenile Group winners of the season in Castle Star and Hermana Estrella along with Flotus, who is ante-post favourite for the Albany after her runaway success at Goodwood for Simon and Ed Crisford, is pretty amazing stuff.

"A colt of his topped the final day of Book 2, selling for 360,000gns to Anthony Stroud on behalf of Godolphin, and he along with his other five highest-priced yearlings have all yet to appear, so there's a lot to look forward to as the season progresses."

As well as an uncommon level of speed and class, Starspangledbanner also showed a considerable amount of versatility during his racing days, with Group 1 victories registered over five and a half furlongs in the Oakleigh Plate, six furlongs in the Golden Jubilee and July Cup, while he also stretched out to a mile in the Caulfield Guineas during his time in Australia with trainer Leon Corstens. 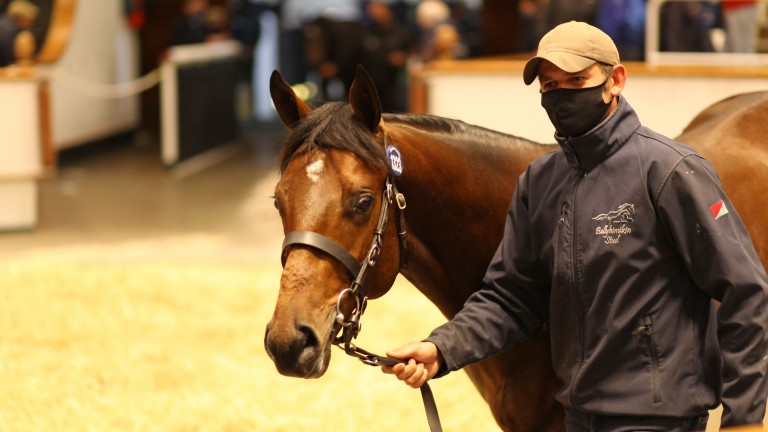 Lot 1,323: the Starspangledbanner colt out of Violet's Gift tops day three of Book 2 of the Tattersalls October Yearling Sale when knocked down to Stroud Coleman Bloodstock at 360,000gns
Laura Green

Although his stock in trade has been sprinter-milers in his own image, the success of Starspangledbanner's second career has been underpinned by an ability to work with mares from a diverse range of bloodlines and performance profiles.

"Starspangledbanner has worked well with quite a wide variety of mares," notes Murphy. "His first Group 1 winner The Wow Signal was the first foal out of an unraced daughter of top middle-distance performer High Chaparral, while the dam of multiple Group winner Home Of The Brave is by Beat Hollow and his 2021 stakes winner Bubbles On Ice is out of a daughter of Galileo.

"At the other end of the distance spectrum, the dam of his European champion two-year-old filly Millisle is by Indian Ridge, and he's also proven successful with mares by the likes of Pivotal, Danehill, Invincible Spirit, Lord Shanakill and Iffraaj."

Murphy continues: "Starspangledbanner was obviously a brilliant sprinter for Aidan O'Brien, winning the Golden Jubilee and July Cup, but he was also successful on his only start over a mile in the Caulfield Guineas before coming to Europe.

"He certainly injects speed and class into his mares, and the majority of his progeny appear to have very good temperaments." 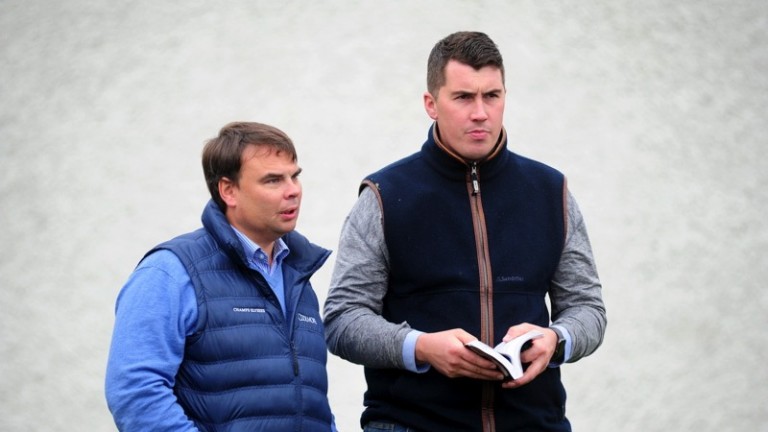 All told, despite relatively modest numbers, Starspangledbanner is responsible for 33 stakes performers worldwide, including ten Group-race winners and a further eight Listed scorers, with his progeny recently recording noteworthy successes in Australia and Hong Kong as well as Britain and Ireland.

Although crack two-year-olds Castle Star and Hermana Estrella are set to bypass Royal Ascot in favour of races on home soil, Starspangledbanner could still be represented by the likes of Cheerupsleepyjean (Queen Mary), The Rosstafarian (Hampton Court) and Aristia (Ribblesdale), as well as the aforementioned Flotus.

There are, Murphy reports, bigger - and potentially better - things still in the pipeline too. 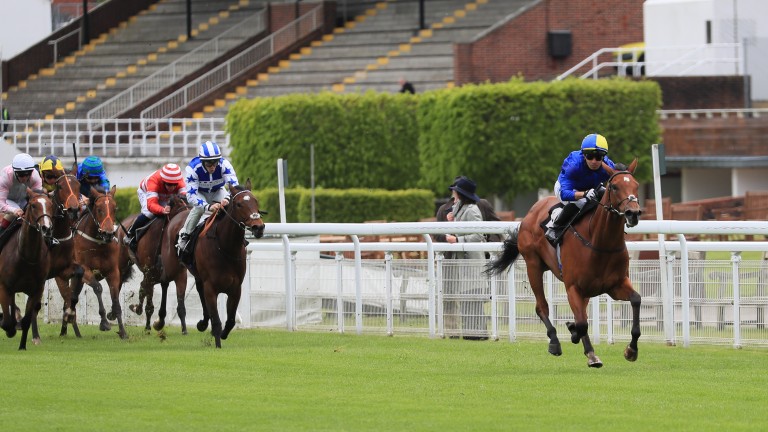 "His yearling crop is bigger again than his two-year-old crop and judging by the animals we’ve seen they’re a quality bunch," he says. "The dams of both Castle Star and Flotus are both back in foal to him, so that’s not a bad start [for this year]!

"He already has well over 100 mares scanned in foal and, unsurprisingly, the phone has been hopping over the past month."

Amo Racing to the rescue as £410,000 Goresbridge top lot deal falls through.

FIRST PUBLISHED 4:13PM, JUN 13 2021
Starspangledbanner has worked well with quite a wide variety of mares

'He got better and better' - Art Collector too hot for rivals in $3m Pegasus 'Gordon thinks a lot of him' - high-flying Wingmen brings £250,000 at Cheltenham The whole episode was a bizarre ending to an otherwise routine sales shift Take-off for Justify at Rosehill with Learning To Fly Death of long-serving Keeneland bid spotter Pete McCormick at 75 Exciting Darley pair Palace Pier and Space Blues welcome first foals