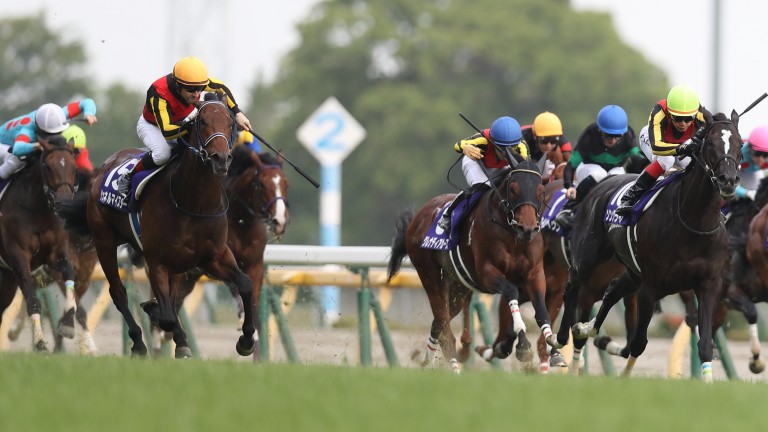 Kingman clinched a potentially significant first top-level winner in Japan as his son Schnell Meister arrived in the nick of time to pass the Kizuna-sired Songline in the NHK Mile Cup in Tokyo.

It was the fourth of Kingman's progeny to lift a Group or Grade 1 with three full years of competition under his belt and an outstanding one-two-three for owners Sunday Racing with Grenadier Guards, sired by Kingman's Banstead Manor colleague Frankel and already a Grade 1 winner, in third.

Schnell Meister is actually German-bred, with his dam Serienholde proving to be another top-class broodmare to have landed the German Oaks. Gestut Wittekindshof's daughter of Soldier Hollow is from a sound staying family and this colt is her first foal. She was transferred to Japan and has a Lord Kanaloa yearling colt and last visited Duramente.

Schnell Meister, who is trained by Takahisa Tezuka, won his first two starts as a two-year-old and has only met with defeat once so far this, when runner-up in early March to subsequent Japanese Guineas runner-up Titleholder in the Grade 2 Hochi Hai Yayoi Sho Deep Impact Kinen.

Dropping back to a mile from a mile and a quarter here, he had plenty of ground to make up on Songline even well inside the final furlong but Christophe Lemaire timed the challenge immaculately to score by a nose.

"He took some time to get into gear but eventually got into a good rhythm and responded strongly in the critical stages," said Lemaire.

"We were able to follow Songline into the homestretch for the attack and had just that little more when Songline started to lean near the finish.

"There is still a lot of greenness in Schnell Meister and has a lot of room for improvement but once he’s established himself physically, he should be able to handle the best at Grade 1 level."

Tezuka said: "It was a challenge for him but I didn't talk about the race with Lemaire beforehand. I saw he was second after Songline but was very happy to catch her in the last step.

"He has not grown perfectly just now so I am looking forward to his future. He is German bred, that is not major in Japan so it is very good for his future that he could win the Grade 1."

Earlier in the card, there was another European footnote as Lanwades Stud resident Bobby's Kitten had a first winner from his only runner in the country.

Alba Minoru, who had looked a winner waiting to happen prior to taking the mile maiden, is from one of Lanwades owner Kirsten Rausing's most distinguished families with his dam Alapinta sold to Japanese connections at Tattersalls in 2017.

FIRST PUBLISHED 12:55PM, MAY 9 2021
Once he?s established himself physically, he should be able to handle the best at Grade 1 level

Too Darn Hot nomination raises A$55,000 for CatWalk Spinal Cord Injury Research How Dubawi's first stakes winner inspired the mating behind the brilliant Adayar Alcohol Free's Sussex win completes glorious week for No Nay Never High-class catalogue of 400 launched for Goffs UK Premier Yearling Sale 'All the support is unbelievable' - Johnny Hassett fundraiser hits €250,000 mark 'My father cut the timber for the stable' - the other Bolger behind Poetic Flare