Nigel Tinkler trainee is a well-related son of Kodiac 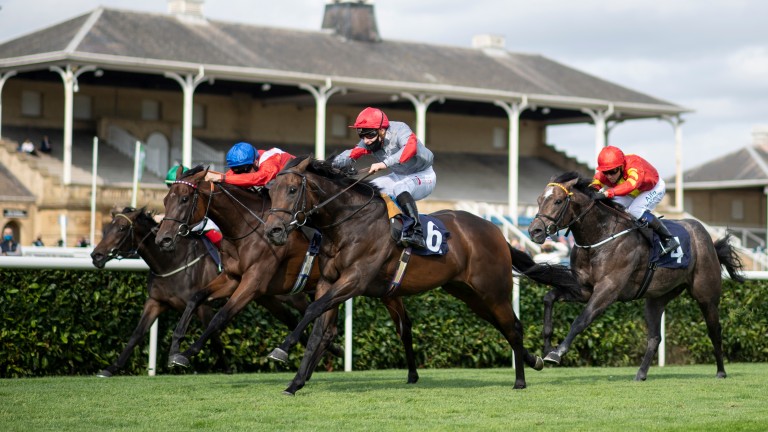 Ubettabelieveit, the winner of last year's Flying Childers Stakes at Doncaster, is to take up stallion duties at Richard Kent’s Mickley Stud in Shropshire.

Trained by Nigel Tinkler and owned by Martin Webb, the three-year-old Kodiac colt also took last season's National Stakes at Sandown and went on to finish third to Golden Pal in the Breeders' Cup Juvenile Turf Sprint. He has run four more times this year, most recently in the Nunthorpe at York.

Tinkler said: "Ubettabelieveit is one of the fastest horses that I have trained and completely sound in every way. His attitude was completely professional and all he wanted to do was please you."

Oisin Murphy, who rode the sprinter to victory at Sandown, added: “Ubettabelieveit was an exceptionally fast horse with a great will to win and a super mover who gave me a fantastic feel when he won the National Stakes."

He joins a roster that includes Massaat and Heeraat and Kent said: “I’m delighted that Mickley Stud is to stand Ubettabelieveit as he’s a really good-looking son of the highly successful sire Kodiac, whose sons are proving to be sire sons as well.

"Kodi Bear, Adaay, Prince Of Lir and Coulsty have all sired Group-winning two-year-olds, and Ardad, who also won the Flying Childers Stakes, has sired the Middle Park and Prix Morny winner Perfect Power from his first crop of impressive two-year-old winners this season.

"I’m grateful to Martin Webb and Nigel Tinkler for giving me the opportunity to acquire Ubettabelieveit, and also that they're retaining shares in him and will be supporting him."

He added: "We'll be making shares available to breeders and will be announcing further details regarding nomination fee after the conclusion of the October Yearling Sales."

Ubettabelieveit was bred by Derek and Gay Veitch at Ringfort Stud in Ireland and sold for 50,000gns at Tatttersalls Book 1 as a half-brother to three other stakes winners bred by winning Mujadil mare Ladylishandra. They are Tropical Paradise (Oak Tree Stakes and Supreme Stakes), Harlem Shake (Group 3 Premio Omenoni) and Shenanigans (Rothesay Stakes).

FIRST PUBLISHED 8:40AM, OCT 11 2021
Ubettabelieveit is one of the fastest horses that I have trained and completely sound in every way