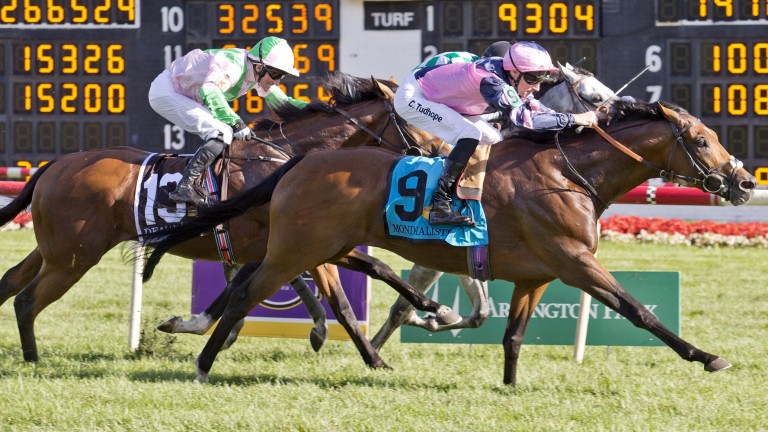 Dual Grade 1 winner Mondialiste was provided with his first winner when the appropriately David O'Meara-trained Hester Prynne stuck on well to land the second division of the restricted novice stakes at Beverley on Monday.

The two-year-old Dame Hester Partnership-bred filly, a 60,000gns purchase from the Tattersalls December Foal Sale when selling to Peter and Ross Doyle, is the tenth foal out of the stakes-placed Diktat mare Dame Hester and a half-sister to German Group 2 scorer Donnerschlag, plus the Listed-winning Izzy Bizu.

Mondialiste proved a tough and consistent campaigner over five seasons, with wins in the Grade 1 Woodbine Mile Stakes and Arlington Million the undoubted highlights.

Trained by O'Meara, Mondialiste also finished second to Tepin in the Breeders' Cup Mile, and occupied the same position in two York Stakes behind Time Test and Success Days.

Bred by Wertheimer et Frere, he was initially trained by Freddy Head and was third to Havana Gold in the Prix Jean Prat.

A €190,000 purchase from the 2014 Arqana Summer Sale, the son of Galileo subsequently sported the colours of Geoff and Sandra Turnbull. After being retired in 2017 he stood his first three seasons at the Turnbulls' Elwick Stud, before relocating to Haras d'Annebault for 2021.

The 11-year-old is the sixth foal out of the wonderful producer Occupandiste, winner of the Prix Maurice de Gheest and Prix de la Foret for Christiane Head and Wertheimer.

The daughter of Kaldoun is a half-sister to three black-type horses - including Only Green, the dam of Yeomanstown Stud sire Shaman - and has also produced Impressionnante, winner of the Prix de Sandringham and dam of Prix du Jockey Club hero Intello, plus Only Answer, a dual Group 3 winner for Fabre and Wertheimer.

No picnic for Viaud as seaside charms await Osarus buyers

FIRST PUBLISHED 2:26PM, MAY 3 2021
The son of Galileo stood his first three seasons at the Turnbulls' Elwick Stud before relocating to Haras d'Annebault for 2021

How Mother Earth propelled an ex Group 1-winning trainer into exclusive company Mixed Derby messages for Dee Stakes winner El Drama Death of popular sprinter-turned-stallion Orientor aged 23 Clare Manning on Boherguy Stud and a weekend of Classic glory for her family A new Classic contender emerges for Camelot as Youth Spirit strikes at Chester 'I wasn't any different when I had children - why should Snow Leopardess be?'